Hitching its wagon to the Windows 7 star today, Amazon announced the upcoming availability of Kindle for PC, a free Windows 7 optimized e-reader program that syncs with a user’s Kindle, and allows PC-based reading and library building.

Just like Kindle for iPhone, the software uses Amazon’s Whispersync functionality to keep users on the same page (literally) as their Kindle. Also like the iPhone application, Kindle for PC users running Windows 7 will be able to utilize multi-touch gestures such as pinch zooming and finger swipes to turn pages.

Naturally, the software will also be available to Windows XP and Vista users when it debuts next month. 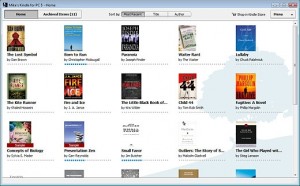 Mike Nash, corporate vice president of Windows Platform Strategy at Microsoft said, “With the announcement of Kindle for PC, Amazon is making its massive selection of Kindle books available on the world`s most widely used platform. The new Kindle for PC`s use of Windows 7 features such as Jump Lists and Windows Touch demonstrates how Windows 7 makes new things possible.”