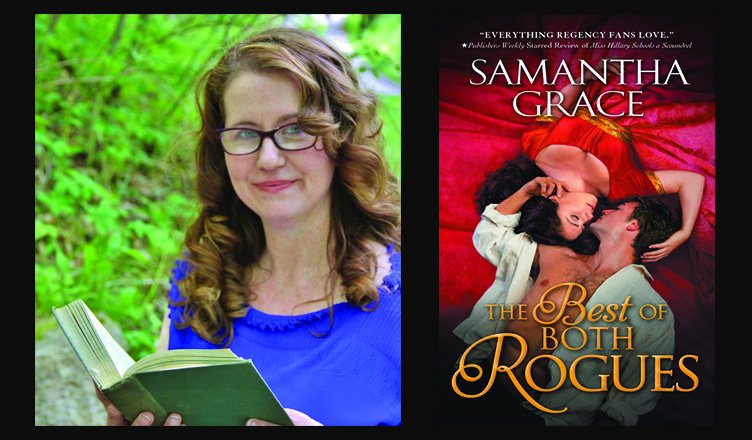 Historical romance author Samantha Grace discovered the appeal of a great love story when she was just a young girl, thanks to Disney’s Robin Hood. She didn’t care that Robin Hood and Maid Marian were cartoon animals. It was her first happily-ever-after experience and she didn’t want the warm fuzzies to end. Now Samantha enjoys creating her own happy endings for characters that spring from her imagination. Publishers Weekly describes her stories as “fresh and romantic” with subtle humor and charm. Samantha describes romance writing as the best job ever.

On your nightstand now: RWR (Romance Writers Report) from April 2015, the print proof for Kissed by a Scottish Rogue, Meet the Earl at Midnight by Gina Conkle on my Kindle, The Scene Book: A Primer for the Fiction Writer, Make a Scene, Scene and Structure, Kitchen Gardening for Beginners, and The Baby Name Wizard. No wonder the pile is so tall!

Favorite book when you were a child: I loved, loved, loved the Trixie Belden series. Trixie was an amateur sleuth—probably similar to Nancy Drew, but I never got into Nancy Drew books. Did Nancy Drew have romance? Trixie Belden did! There was definitely something (innocent) going on between Trixie and her best friend Honey’s older, redheaded adopted brother, Jim. *sigh* And so began my love for gingers.

Your top five authors: Now that I’m a writer, I don’t have as much time to read as I used to, and I like to try as many different authors as possible. There are some very talented authors out there! I’m not sure I could pick just five. Some of my old favorites are Sophie Kinsella, Jodi Picoult, Nora Roberts, Patricia Cornwell, and Tami Hoag. These were my auto buys.

Book you’ve faked reading: Haha… This is a funny question. I fake read several books in AP English in high school. I could only get so far, and then I skimmed Moby Dick and A Portrait of an Artist as a Young Man. Honestly, I might not have even skimmed the rest of James Joyce’s book. There are probably more I fake read, but those are the most memorably painful books.

Book you’re an evangelist for: I’ve recommended I Know this Much is True by Wally Lamb several times. It is so amazingly good. I couldn’t put it down. Mr. Lamb weaved an intricate story, and it was incredibly satisfying to see all the pieces come together for a happy-ending. Oh, and there’s a bit of romance, too.

Book that changed your life: Hmm… It’s hard to pick just one. When I was a brand new mom, I felt like I was struggling to figure out who I was anymore. I had only been married a little over a year when our son was born, and my husband was living in another town to complete his fellowship in child psychology. It was just me and the kidlet, and all the responsibilities that come with working a job and running a house. I had planned to go back to school to earn my doctorate in psychology, but I lost my energy and drive to pursue it once I had my son. Plus, working in an inpatient psychiatric unit really made me question if that was what I wanted. Anyway, I picked up Take Time for Your Life by Cheryl Richardson, and it spoke to me. I did the exercises and learned about balance and accepted that taking care of my needs was not being selfish. It was necessary to have anything left to give to others.

Another book I read around the same time that changed my life was Love’s Executioner by Irvin Yalom. The explanation of why it changed my life is too long and I’ve already been nattering on for a while. I’ll just say the book shaped my life philosophy of accepting others, trying to understand their behavior rather than assuming what they do is motivated by jerkiness, and choosing treat others with kindness. I’m a much happier person now.

Favorite line from a book: I always read amazing lines in books and stop to revel in its awesomeness only to completely forget it later. I really should start highlighting in my Kindle. I loved Good Omens by Neil Gaiman and Terry Pratchett, so I did a search for quotes and found this little gem. “If you stopped tellin’ people it’s all sorted out after they’re dead, they might try sorting it all out while they’re alive.”

Which character you most relate to: Maybe Claire from Outlander. I’ve always been interested in medicine. My curly hair gets very unruly without the right products. I can curse like a sailor, although I reserve this talent for special moments. I’m a bit stubborn, too. I’m more diplomatic than she is, though. She has no brakes when it comes to speaking her mind, which doesn’t always work to her favor.

Book you most want to read again for the first time: Maybe Bridget Jones’ Diary. I had never read anything like it at the time. It was fresh, funny, and so entertaining.

Tell me about YOUR book: The Best of Both Rogues is the third book in my Rival Rogues series, and it’s a second-chance at love story. For those who’ve read In Bed with a Rogue, this is a love story for Sebastian’s sister, Eve. The poor girl has been through a lot, thanks to the hero calling off their wedding and running away to India the day of their wedding. After two years, she finally has her life back together. Her reputation has been restored, and she is betrothed to a good man. Others might think he is a bit odd, but she finds his quirks endearing. Still, she doesn’t love him like she loved Ben Hillary, and she has to face this fact when Ben returns to England with the intention of trying to win her back.

One of my readers once told me that my stories are romance with heart and humor, and I believe The Best of Both Rogues fits that description. I had a great time teaming up the two gentlemen in Eve’s life in a bid to convince Eve to call off her engagement without making it obvious her betrothed wants out of the marriage. (There’s a good reason Sir Jonathan must end the relationship, but I don’t want to give away any spoilers!) I really enjoyed writing the scenes where Sir Jonathan tried to make himself less desirable with Ben’s input. I think some funny things emerged, but there are touching moments in the story as well. Ben and Eve might have the sweetest, most romantic relationship of all my previous heroes and heroines. 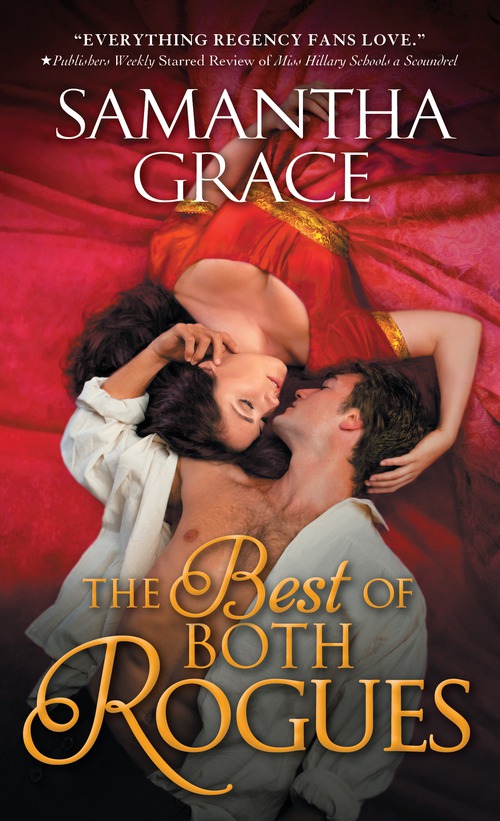 The Best of Both Rogues by Samantha Grace

The worst thing Mr. Benjamin Hillary ever did was abandon his bride-to-be on their wedding day.

The hardest thing he will ever have to do is watch her marry another man.

After two long years abroad, Ben finds Eve every bit as captivating as she was the first time he saw her, and he vows to set things right.

Lady Eve Thorne has a new man in her life, and Ben is nothing but trouble. She is no longer a starry-eyed young woman, and now that he’s back, he can go hang for all she cares. At least that’s what she keeps telling herself…

Ben made a slow circle of the brightly lit ballroom, stopping occasionally to study the couples as they sashayed past, their cheeks pink from exertion. After several moments, he was satisfied Lord Wellham wasn’t among the dancers, not that Ben was surprised. If his memory served, the earl favored gambling over gamboling.

Reaching a secluded corner near a dark alcove, he paused to check once more for his quarry before he sought out the card room.

“What are you doing here?” a voice hissed. “You are not on the guest list.”

“Pardon?” Ben spun toward the speaker and came up short. His eyebrows veered toward each other. “How do you know?” he whispered back to the mass of green palm fronds.

“Because I helped make the list.” The plant’s fronds parted, and Eve Thorne’s stern glare greeted him. What the devil was she doing?

Her frown deepened when he simply stared, at a loss for words. “Do you have a death wish, Mr. Hillary?”

The corners of his mouth twitched. “Let me guess, you’ve been attacked by a man-eating plant. Are you in need of rescue, Kitten?”

She growled softly and the fronds snapped back into place. Ben checked the surrounding area to be certain they hadn’t earned any unwanted attention, then peered around the massive greenery. Eve was wedged against the wall, her yellow chiffon skirts crushed against the large pot. Her chest rose and fell in rapid movements, drawing his attention to the modest swell of her breasts peeking above her lacy neckline. A rosy glow infused her ivory skin, making the sprinkling of freckles across her cheeks almost unnoticeable.

God, he had missed her – her freckles, her pouty lips, her soulful brown eyes. He had been smitten from the moment he had spied her at the theater during the little Season, and two years on a faraway continent had done nothing to cool his ardor.

“What are you doing back there, Miss Thorne, and shouldn’t you have a chaperone?”

She crossed her arms as if erecting a wall between them. “God only knows why, but I am trying to save your skin, Benjamin James Arran Hillary.”

Damnation. He had almost forgotten he’d been burdened with so many names, and that she had a habit of invoking every one when she was perturbed. His smile expanded. Despite her pretense of indifference, she was worried for him. “Am I to conclude your skulking about means you still care?”

“I care about Lady Eldridge, and I do not want to see her ball ruined by you and Sebastian coming to fisticuffs. You really must leave before he sees you and demands another meeting on the field.”

Crossing paths with Sebastian Thorne didn’t concern Ben. Her brother’s need to defend her reputation after Ben jilted her had been satisfied three weeks earlier in a duel, and Thorne would not issue a second challenge for fear of losing. Ben suspected neither of them wanted to risk looking like fools again either. Instead of dueling with pistols or swords as any other normal men would do, they had allowed Eve to choose the weapons. She had chosen gloves.

He scowled. “Do you have any idea how ridiculous it looked for two men to engage in a slapping match?” The gents at Brooks’s hadn’t stopped talking about the duel for days, and Ben had endured the brunt of the teasing since he’d followed his youngest brother’s advice and allowed Thorne to win.

Eve’s smile radiated with self-satisfaction. “Since no one died, I would say I made an excellent choice.”

H grudgingly admitted her cleverness had managed to resolve the conflict without bloodshed – or much, anyway. Ben had walked away with a cut on his cheek and a nasty bruise, thanks to her brother filling his glove with pebbles. But bruised pride and a bruised mug were small prices to pay to see Eve’s position in Society restored.