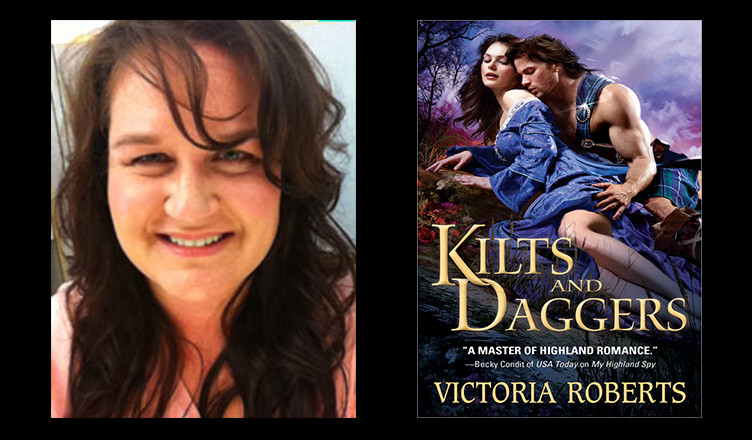 Award-winning author Victoria Roberts writes Scottish historical romances about kilted heroes and warriors from the past. RT Book Reviews named her “one of the most promising debut authors across the genres,” and she was also a 2013 RT Reviewers’ Choice award winner for X Marks the Scot.

Represented by Jill Marsal of the Marsal Lyon Literary Agency, Victoria is a member of Romance Writers of America® and several local chapters, as well as a contributing author to the online magazine Celtic Guide.

Victoria lives in western Pennsylvania with her husband of twenty one years and their two beautiful children—not to mention one spoiled dog. When she is not plotting her next Scottish adventure, she’s dragging her clan to every Scottish festival under the sun.

On your nightstand now: All that’s on my nightstand right now is research for my next book.

Favorite book when you were a child: Black Beauty. I couldn’t get enough.

Book you’ve faked reading: I muddled my way through 50 Shades of Grey.

Book you’re an evangelist for: Karen Marie Moning’s Highlander series (all of them!)

Book that changed your life: Hannah Howell’s Murray brothers. Hannah’s book was the first Scottish historical romance that I’d ever read. I guess you could say that she started this madness in me to pen about Scotland and men in kilts.

Favorite line from a book: “It is a truth universally acknowledged, that a single man in possession of a good fortune, must be in want of a wife.” Pride and Prejudice

Which character you most relate to: Claire from Outlander. I’m trapped in a century where I don’t belong.

Book you most want to read again for the first time: Harry Potter

Tell me about YOUR book:  I think the back cover blurb summarizes Kilts and Daggers the best.

Ever since Lady Grace Walsingham discovered her uncle and sister are spies for the Crown, she has yearned for adventure. She’s counting the days until she can leave barbaric Scotland behind, even if she must endure Highland captain Fagan Murray’s company for weeks.

Fagan has a simple mission: escort the haughty Lady Grace back to England. But nothing is ever easy. The sharp-tongued woman needles him at every turn. But when a menacing threat follows them on their journey, Fagan’s grudging tolerance for Grace turns to respect…and into a perilous attraction that could seal their fate.

This book was a lot of fun to write, and I hope readers love it too!

What People Are Saying!

“Kilts and Daggers has romance, intrigue, and danger.” – Bitten by Books

“In a classic story of disdain leading to love, Fagan and Grace’s banter strengthens their connection… Grace and Fagan make visiting the Highlands worth the trip.” – Publishers Weekly

“Filled with intrigue and a wonderful cast of characters you can’t help fall in love with… A must read book and series.” – Author April Hollingworth 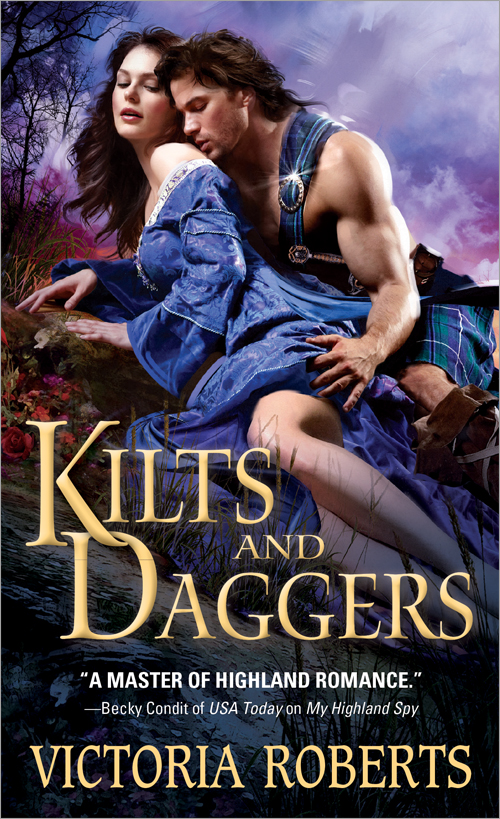 Ever since Lady Grace Walsingham discovered her uncle and sister are spies for the Crown, she has yearned for adventure. She’s counting the days until she can leave barbaric Scotland behind, even if she must endure Highland captain Fagan Murray’s company for weeks.

Fagan has a simple mission: escort the haughty Lady Grace back to England. But nothing is ever easy. The sharp-tongued woman needles him at every turn. But when a menacing threat follows them on their journey, Fagan’s grudging tolerance for Grace turns to respect…and into a perilous attraction that could seal their fate.

“Mister Murray, I don’t feel at ease discussing these subjects with you.”

“Then call me Fagan. Mister Murray was my father’s name anyway.”

Grace looked around and then softened her voice. “Now is that truly appropriate?”

“I told ye before. Ye’re a long way from England, lass. Lest ye forget, ye’re in the Highlands now. We do things differently here.”

She lifted a brow. “How could I forget?”

“Ruairi said ye’ll be staying with us for a few weeks. More to the point, I already call Ruairi’s wife Ravenna.” He turned up his smile a notch. “Ye and I are practically like family. Ye will call me Fagan, and I will call ye Grace, or I could always call ye bhana-phrionnsa. I’ll be kind enough to give ye a choice.”

“Ravenna may permit you to call her by her Christian name, but I certainly do not, Mister Murray. Although you do make me laugh, I’m afraid you and I are far from family.”

When Grace’s eyes smoldered, Fagan knew he shouldn’t get too close to the flame for fear of getting burned. There was still enough time to take his leave. Otherwise, he’d be verbally sparring with a lass in the middle of the great hall. Ruairi would no doubt have his head for causing mischief with his kin so soon after the wedding.

Fagan slapped both hands on the table and casually stood. Instinctively, he took another step back in case the lass suddenly had a strong urge to reach across the table and throttle him—or worse. Nevertheless, once she heard what he was about to say, the table wouldn’t provide enough space between them.

“Verra well then. I think bhana-phrionnsa suits ye quite nicely.” When Grace’s cheeks turned scarlet, Fagan smiled. “Donna say I didnae warn ye. Remember I did give ye a choice.” He winked at her and then turned on his heel.

He had a hard time trying to mask his smile. He turned around slowly and lifted a brow. “Aye?”

Grace flew to her feet, walked around the table, and closed the distance between them. She lifted her head, and by the way she was unsteady on her feet, he swore the daft lass was standing on the tips of her toes in a futile attempt to look him level in the eye.

“England and Scotland have been warring for centuries, Mister Murray, yet somehow Scotland has never won.” Lifting her skirts, she brushed his arm with her shoulder and took a few steps away from him.

That was until he called after her and stopped her dead in her tracks. “Cuine a chì mi a-ris thu, Grace?” When will I see you again? He made certain he said the words as though he spoke to his lover, which obviously had the desired effect because her whole body stiffened, and then she left him without a backward glance. Fagan’s mood was suddenly buoyant. He wasn’t exactly sure why he loved to unnerve Princess Grace, but he had one hell of a time doing it.

Giveaway for 3 copies of MY HIGHLAND SPY by Victoria Roberts