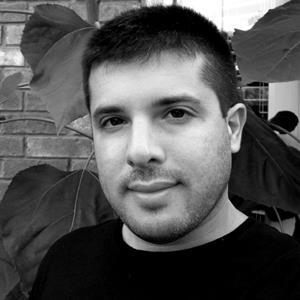 He began his career writing short stories. He sold his first story, “Worms Believe in God”, in 1998. Since then, his work has appeared in various publications, among them Flesh & Blood, Chizine, and Orson Scott Card’s Strong Verse.

At both Amazon and Barnes and Noble, Daniel’s novels have hit the overall Top 100 bestsellers lists. In total, they’ve sold over 150,000 copies.

KindleObsessed: Hi Daniel! How are you? Good? Great! (If you’re not actually great just fake it. We here at KindleObsessed don’t like Debbie Downers. Right Kindle-ites?? *looks around for agreeable nodding*)

So tell me a little about yourself. The good stuff, not the lame stuff.For example: What is this freaky obsession you have with George Takei? (Don’t deny it…I’ve seen all your Facebook posts.)
Daniel: Misty!  One question at a time!  That was about seven questions in one.

KindleObsessed — only happiness allowed!  Sort of like that Simpsons episode where Flanders took over the world, and metal prongs forced everyone’s mouths to smile.  Or like that Twilight Zone episode, where the little kid forced everyone to say things were good.  Hey — get those prongs away from me, Misty!

This gives me an idea for my next book — a dystopian, nightmarish world where the cruel Empress Misty allows NO sadness.  If you’re not happy, you die.

Moving right along… I’ve been featured on KindleObsessed a few times before, so some people here might already know me.  For those who don’t, I’m an author of fantasy novels.  I’m mostly known for my trilogies Song of Dragons and Dragonlore, both of which are set in Requiem, a mythical kingdom where people can turn into dragons.

As for George Takei — isn’t everyone on Facebook obsessed with him?  I don’t think anyone gets nearly as many Likes and Shares as George.  Join us, Misty!  Worship him!

KindleObsessed: Ok, now that the niceties are out of the way…Why Dragons?

Are you a George R.R. Martin “dragons are awesome” bandwagon jumper, or are you just reliving your glory days as an introverted tiny tot who daydreamed about magic and scales? (Wow…that sounded much harsher than I intended. Oops.)

Daniel: Well, the dragons go way back.  When I was, as you say, a “tiny tot” (long before Martin wrote about dragons), I was a bit TSR-obsessed.  I played Dungeons and Dragons, read all the Dragonlance novels, and collected Larry Elmore and Jeff Easley paintings.  The dragon thing started back then — this was about 1990 or so.

As for George R. R. Martin… I’m one of those “elitists” who read his work even before A Game of Thrones.  In the mid-90s, I was a fan of his shorter work, such as “Sand Kings”.  I read A Game of Thrones when it was released in the late 90s, and yes — it definitely influenced my work.  I even wrote the phrase “winter is coming” in my novel Blood of Requiem as a tribute.

As for why dragons — well, I don’t only write about dragons!  I have other novels too: the Misfit Heroes series is about a hapless group of adventurers, Flaming Dove is about a half-demon, and The Gods of Dream is about a pantheon of sleep gods.  But the dragon books are my most popular ones.  People love dragons.

KindleObsessed: And last (because I only allow myself 3 questions or shit would get very awkward very fast) tell me about your latest novel (AND their totally rad covers!!)

Daniel: I’m currently two books into Dragonlore, a trilogy about an ancient kingdom where people can become dragons.  The first volume is titled A Dawn of Dragonfire; it recently hit Amazon’s Top 100 bestsellers list, the first of my books to do so (*Shameless Bragging Alert*).  The second volume, A Day of Dragon Blood, was released last October.  The third volume, A Night of Dragon Wings, is scheduled to be released next month.

If you’d like to leap into the trilogy, just head over to Amazon, Barnes and Noble, or your store of choice and look for A Dawn of Dragonfire.  And you can learn more about the book on my website:  http://www.DanielArenson.com/ADawnOfDragonfire.aspx

You can also read my earlier trilogy, Song of Dragons, which is set in the same world (but tells its own story).

Lots of titles here, I know.  For a bird’s eye view, you can see all the books here:  http://www.DanielArenson.com/FantasyNovelsKindleEbooks.aspx

Okay, Misty, my mouth is hurting from smiling now, and I know we must ALWAYS smile on KindleObsessed or else… so it’s time to RUN– I mean, thank you for the interview and say goodbye.  Thanks, Misty, and see you next time! 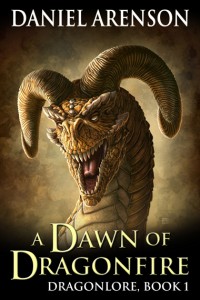 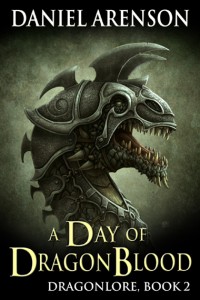