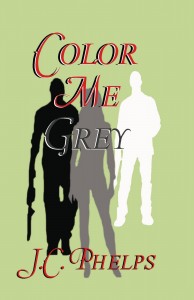 I love action novels! Kick butt girls in kick butt situations are just pure unadulterated fun for me, so when I had the opportunity to read “Color me Grey” (by the very lovely J.C. Phelps) last year I was thrilled.  So thrilled in fact that when I finished book 1 in this series I immediately purchased the next 2, and read them both with in a matter of hours.  Since that time I have become (what I would consider) great friends with J.C. and when I got an email (at some ungodly hour) asking if I would like to host 1 of the days on her blog tour I jump at the opportunity. Unfortunately I forgot (over the holiday) that I was supposed to interview J.C. about all things “indie” and today found myself scrambling for an alternative. So.. here it is… a “Character Interview!” (How’s that for pulling a rabbit out of a crumpled up hat!)

Meet Alexis Stanton, a 5′ 4″ petite young woman with a yen for adventure. She grew up as a tomboy wishing she could have all the adventures boys could have. She has since decided that being a boy instead of a girl has its advantages, but being a woman is much better. Raised in a family with money, she was able to pick and choose her education. She had been schooled in everything from being a lady to courses with Special Forces instructors. Her desire for adventure and her boredom with her current employment and a strange ‘HELP WANTED’ ad causes her to quit. She finds that job she could “just die for”… and it looks like she just might!

An Intimate Interview With… Someone!

KO: Afternoon Ladies and Gents!  Today I am lucky enough to host one of the most unique women I have ever had the pleasure of knowing.  Not only does she make all 3 of Charlie’s Angels look like Kindergartners with water guns, she is the girl who put the AWE back in AWESOME!

I know I can’t use your real name… that whole “If I tell you I’d have to kill you thing” we discussed, so for the time being we will just call you Ms. X. Good?

KO: So tell me about being a partner in a Private Military Corporation… how exactly does one become involved in that line of work… are there special classes? A seminar?

Ms. X: You are going to disguise my voice, right?

KO: So, how did you get involved with a PMC?

Ms. X: Do we have to use Ms. X? I really don’t like the X thing…makes me sound like a pirate or something.

KO: Geez Alex, come on…it’s Ms. X or you pick a better name. What if we pick something like… deep throat?

KO: So now you’re a Native American?  What the hell is “Shadow Dancer?” It sounds like one of those cheap fantasy novels my mom reads.  How about something like Penumbra? It means partial shadow.

KO: Aww.. right, totally forgot about that nasty sniper dude out there with that name.

KO: Okay, well, you are going to have to come up with something quick before my audience starts slitting their wrists.  How about we just go with unnamed? Does that work for you?

KO: Today we have an “unnamed” woman who is a partner in a Private Military Corporation, who hopefully (at some friggin point) is going to shed some light on what it’s like to work in such a male dominated field.

So, what’s it like to work for a PMC?

Unnamed:  It’s a very interesting job. I get to do all kinds of things on a regular basis that other people don’t, and the pay is spectacular.

KO:  Wow Captain Vague… thank you very much for that informative answer.  Is it true that you had a hand in the capture of the infamous terrorist and confirmed maniac, The Lion?

Unnamed:  You can’t ask me that!

KO: Why not? You’re incognito.

KO: Fine. You know it’s going to take me a month to cut and paste this poor excuse for an interview back together right?

Is it hard to be the only female partner in your company?

Unnamed: Yes and no. Some days I fit right in with the guys and some days I’m hopelessly unable to blend.

KO: Having such an action packed and dangerous job has got to take its toll. What do you do to unwind?

Unnamed: I like to go for runs or read. Computer games are one of my favorite past times too, but I haven’t been playing much for a long time now.

KO: What about men? Is there someone special?

Unnamed: That’s a yes and no situation too. There is someone I would enjoy spending my time with but it’s complicated.

KO: Why is it complicated? You’re a strong…um…forceful woman. Why don’t you just tell him that you have feelings for him… or at least just rip the hottie’s shirt off and chunk him onto the nearest couch?

Unnamed: I don’t need you to start lecturing me about getting a boyfriend. We’ve talked about this. I will not make the first move and obviously he won’t either. So get past it.

KO: Get past what? You aren’t doing anything to GET PAST? The last time I checked you were getting plenty of rest, if you know what I mean, and besides…it would be good for you to find a new way to relax other than cleaning your obnoxiously large gun.

Unnamed: What would you and I talk about if I did?

KO: The same thing but only different, and by different I mean you would spend hours on the phone giving me anatomy lessons.

KO:  You are a sucky interviewee. Thank you for being with us today.

Unnamed:  I told you I was no good at this kind of thing.

Note: I just wanted to give one more thanks to J.C. for being such a wonderful sport and for (of course) creating such an intriguing piece of literature! Thanks girl.