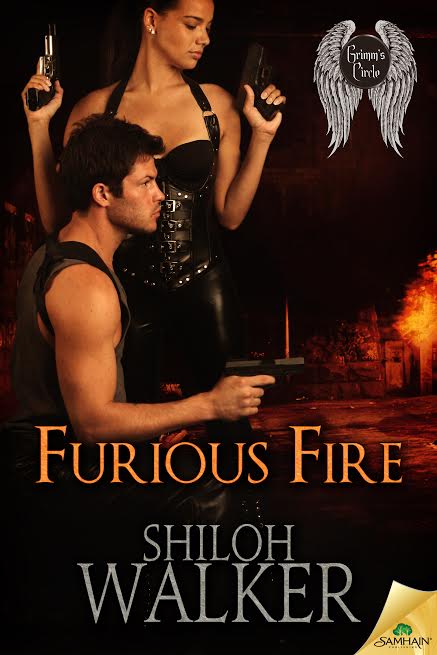 He is the love of all her lives…

Thomas Finn, troublemaker, gunslinger, guardian angel…loner. More than a hundred and fifty years ago, he was shot in the back then brought back to life just in time to watch a demon masquerading as his best friend kill the love of his life.

Now, as a Grimm, he satisfies his need for vengeance hunting down demons like the ones that took Rebecca from him. His mission: kill as many as he can, then, when the time comes, go down in a blaze of glory. But with each kill, he comes closer to a line no angel should cross.

Her name was Rebecca. Then it was Tilly. Then Ada. Now, Kallypso. She’s lived so many lives, she can’t even remember when or why it started. All she knows is, she’s always searching for a man with golden eyes that make her burn. And when she finds him—as she always does—she knows that spark of joy means she’s only seconds away from death…again.

This time will be no different…unless something breaks the cycle once and for all.

Warning: Contains the Groundhog Day of star-crossed lovers, a pissed-off guardian angel, a demon-hunter with an axe to grind, and the battle to end all battles. Be warned…there’s pain ahead in this book. Oh, and that HEA finally happens. For these two, anyway. 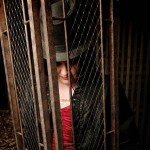 Shiloh Walker is an award-winning writer…yes, really! She’s also a mom, a wife, a reader and she pretends to be an amateur photographer. She published her first book in 2003. Her newest series, Secrets and Shadows, launched in April 2014. Look for the newest book Deeper than Need, to be followed by Sweeter than Sin andDarker than Desire.

She writes romantic suspense, contemporary and paranormal romance, and urban fantasy under the name J.C. Daniels.

Need to catch up on the series?? 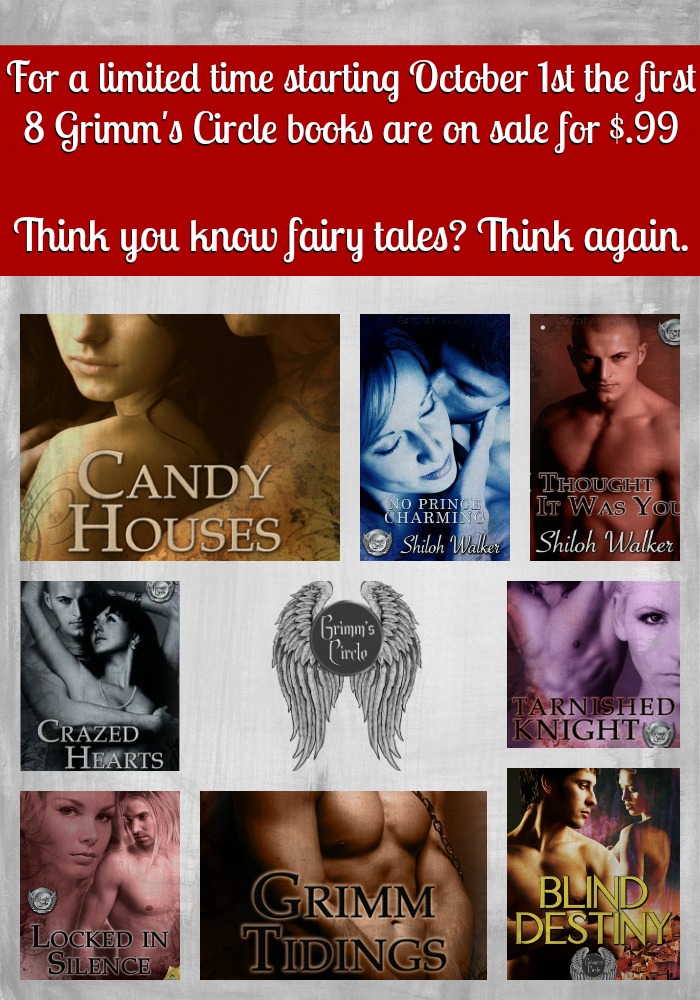 Book 1…available in ebook, or in The First Book of Grimm

Greta didn’t get her happy ending her first time around. And now that she’s a Grimm—special kind of guardian angel and official ass-kicker in the paranormal world—romance is hard to find. Besides, there’s only ever been one man who made her heart race, and the fact that he did scared her right out of his arms. Now Rip is back. And just in time too, because Greta needs his help.

On a mission he knows is going to test all of his strengths and skills, the last person Rip expected to see is the one woman who broke his heart. Working together seems to be their only hope. But, when faced with a danger neither of them anticipated, the question is, how will they face the danger to their hearts—assuming they survive, of course.

Her Happy-Ever-After has been a long time coming…

Book 2, available in ebook, or in The First Book of Grimm

Elle spent years trying to get over her so-called Prince Charming, and she’s finally getting the hang of it. A Grimm—a guardian angel with unique gifts—she spends her nights trolling for demons and kicking ass, and lately, her days have been spent with her on-and-off-again lover, Ren, a fellow Grimm. But fate has other plans in store for Elle, plans that include Michael, the prince from her youth who broke her heart.

“What do you choose…live for her? Or would you rather die?” That was the choice Michael was given all those years ago. Although he knew she’d never forgive him, when Michael was given the chance to become a Grimm, he took it. Still, he isn’t so sure Elle needs him in her life. With a lover at her side and a mission before her, Elle looks like she’s doing just fine without him.

But the not-so-charming prince isn’t going to back off that easily…not if there’s a chance she might need him again. He’d do anything to save her. Kill for her, live for her, die for her…

I Thought It Was You

Book 2.5, Available only on ebook
The events of this free short story take place between the events of No Prince Charming and Ren’s story, Crazed Hearts. Please note this is not a standalone story.  It’s a companion piece for books 2 & 3.
It turns out both Ren and Elle had some loose ends they needed to tie up…and that’s what this story is about. It’s not Ren’s happy ever after. That’s in Crazed Hearts.

He’s no fairy-tale prince. But he just may be the hero she needs.

Book 3, available in ebook.  In print in the Second Book of Grimm

Ren has always danced along the fine line between being a little bit crazy and being overcome by a darkness that’s haunted him since his mortal days. As an empath, he prefers to live far from people who would leak their emotions all over him, so he’s not expecting the woman who drives right into the heart of his wood. She has a cursed book with her and demons hot on her heels. Even more surprising are her abilities and the reaction Ren has to her.

Aileas is on the run.  She just isn’t certain if she’s running from something real or imagined. One thing is for sure, her brother is dead and she’s certain the book she found has something to do with his death. She really starts to doubt her sanity when she meets a hot but somewhat crazed man in the middle of nowhere.

He calls himself Ren, and although he doesn’t seem to be out to hurt her, he definitely wants something.  She just doesn’t understand what.  She does know what she wants though. She wants him, and the shadows and darkness she glimpses inside him don’t matter.  At least, right up until he claims to be a guardian angel.

And she thought she was going crazy.

Book 4, available in ebook.  In Print in the Second Book of Grimm.

One look at Jack Wallace and Perci knows he’s going to be trouble. Even surrounded by soul stealers, he’s a one-man wrecking crew. What does he need Grimm training for? He’s already hell on earth, a warrior bent on destruction. And something…more.

He’s too strong and fast to be a mere mortal. Even covered in blood, he makes her forget she’s only here to do a job and get out. It’s twisted. Sick. She hasn’t felt this alive in three centuries.

Born with a natural talent for killing unnatural things, Jack has always known things he shouldn’t. The fact that Perci is one of them glows all over her. Giving him an unholy urge to see just how far he can push her before don’t touch me melts into touch me there.

When they come together, it isn’t careful or cautious. It’s heaven and hell, exposing all their raw and wounded places to healing heat, resurrecting memories of a destined love from the distant past. But the evil that destroyed them once before has tracked them here, threatening their second and last chance at forever. Demanding a sacrifice no one—Grimm or human—should ever be asked to make…

Dying is hard enough. Coming back to life is brutal.

Vanya has been hunting and killing demons ever since one of them scarred her face and killed her sister. Correction—since she was forced to kill the demon possessing her sister.

Then some sort of angel offers her a deal she can’t refuse—that if she becomes one of them, she gets to kill even more demons. Tonight, she’smade that choice. The death she smells on the air will be her own—and she welcomes it.

Silence feels a darkness is looming. Change—something he has every reason not to welcome. The deeply hidden memories that robbed him of his past, of his own name, render him unfit to teach anyone the ways of the Grimm. Yet here he is in the dankest sex club in town, waiting to assume his charge—after he stands by and watches her die.

When Vanya awakes, their complicated, dangerous dance begins. And so does something else—a searing need that blisters along their unexpected mental connection. Silence shouldn’t be drawn to his student, but once they touch, he can’t think of a reason to stop. Even though acting out their darkest desires puts them in more danger than they realize.

Never fear the pain. Fear what lies behind it…

Now, a hundred years later, he’s been called to protect someone too much like himself. A woman who could let the chains of her past drag her down unless she learns to let go. A woman who fights like there’s no tomorrow, because she clearly doesn’t want a tomorrow.

Celine thought her second chance at life would be an opportunity to fix some of her worst mistakes, to set things straight. She couldn’t have been more wrong. She’s trapped by the past and her regrets, and nothing—not even her darkly sexy new trainer, Jacob—has a blade sharp enough to cut her loose.

Chains are Jacob’s specialty, but his help comes with a price. To her, the cost is her heart. To Jacob…something much more.

Warning: Contains a heroine with enough fight in her to put the 300 to shame. And a hero who knows how to take a punch.

Heigh ho, heigh ho, it’s back to hell she goes…

Myrsina knows the stories. As one of the oldest of the Grimm, she had a hand in writing most of them, but only she knows the dark origin of the Seven Bloody Sisters. It springs from the place of her birth—and her death. A place of pain and misery to which she plans to never return. Unless forced.

When Luc appears on her doorstep, her heart twists with suppressed longing for the man who can never be hers. The only man who can make her do the impossible—go home.

Luc may be blind, but through their unique, bittersweet connection, even he can see that the task laid before them is ripping Sina’s soul apart. This time it isn’t as simple as fighting a demon that has escaped from the netherplains.

Sina must go back in time—to that cursed ground—and right a wrong that she unknowingly brought about. To write a new ending to a story that may give them both a chance at happily ever after. Assuming they survive.