Ten Things You Don’t Know About Me

Well, let’s be honest here – there are lots more than only ten, right? After all, I’m just starting to get acquainted with many of the readers out there. But, for the sake of this post I’ll divulge some mild “secrets” of the personal kind.  How many of these pertain to you, too?

So, if by now you still choose to get a closer look inside my head, (and I hope you will) check out my newest book and be sure to let me know what you think. Have a great day!

As a young girl who spent her allowance on Nancy Drew mysteries, Louise realized that one day, she might have a story of her own to tell. Maybe even more than one story. After years focused on raising her children she eventually reconnected with her passion for creative writing. She soon began to craft a large collection of short stories which were published in the inspirational online magazine, Faithhopeandfiction.com. Shortly thereafter, she authored her first novel, Wishless, a contemporary YA, released in 2011.

Louise devotes a portion of each day to honing her skills. She has several other novels currently in various stages of development. A confirmed bibliophile, Louise enjoys reading outdoors on a warm spring day and watching her pup chase leaves on a breeze. She looks forward to meeting others who share her love of the written word and invites you to visit her blog, her website and follow her on Twitter and Facebook.
Stalk Her: Website / Facebook / Twitter / Twitter #2 / Blog 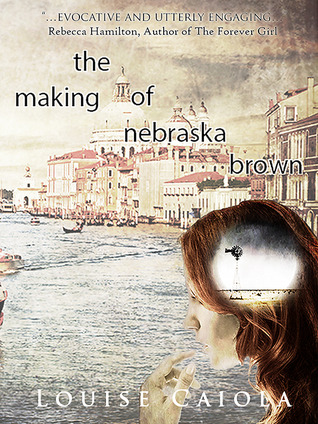 The Making of Nebraska Brown

The last thing eighteen-year-old Ann Leigh remembers is running from her boyfriend in a thick Nebraska cornfield. This morning she’s staring down a cool Italian sunrise, an entire continent from the life she once knew. The events of the eighteen months in between have inexplicably gone missing from her memory.

All at once she’s living with Tommy, an attractive, young foreigner asking for her continued love. Though he’s vaguely familiar, she recalls a boy named Shane in America who she reluctantly agreed to marry. Juggling a new world while her old one is still M.I.A is difficult enough without the terrifying movie scenes spinning a dizzy loop in her mind: glimpses of a devastating house fire, a romance gone wrong, an unplanned pregnancy, and a fractured family – each claiming to be part of who she once was – a girl and a past somehow discarded.

Ann Leigh must collect the pieces of herself to become whole again, but she doesn’t know who to trust especially when Tommy’s lies become too obvious to ignore. And above all, her heart aches to discover what became of the child she may or may not have given birth to.

Excerpt #1
Tommy sat down beside me. His musky cologne smelled familiar. His espresso-colored brown hair parted over on the left side of his head, draped over his ears in dogged springiness. I’d told him I liked it shorter. I knew that, too. “Of course. We were supposed to meet there for lunch, like we always do on Tuesdays. What’s going on? Why are you playing games?” I let my head fall into the cushion. Tears tempted me to cry them. They’d been behaving for hours now. I clamped my lids shut, breathed through my mouth. “I’m not playing. I don’t know what happened. I can’t remember why I’m here or who I am. Who you are.” His hand fell on my knee like winter’s first snow, easy and without a sound. When he spoke, he used that same tone—sweet and calm as dawn. “Ana, it’s me. Tommy. And you’re you. We’re us. Have been for over a year.” I wound my fingers with his, searched his face for the other half of this “us” he referred to. He pulled me close. Caramel wafted at me from inside that bag, slapping me around, calling me silly. Tommy held the small of my back in his palm. His hands were large, strong and sure, the kind of hands that had never had a frightened moment in their whole life.
Excerpt #2
He was kissing me, and I couldn’t make it stop. His breath smelled like radishes; I wanted to vomit. He kept saying how he was crazy about me. I wanted to will myself deaf. Instead, I picked a fight. Pretended I was angry about him having to work at the restaurant on my birthday. I didn’t care all that much. It was just an excuse to pull away, turn away from him. I imagined soon I would make an escape, leave my whole life behind, go to Hollywood, or Asia or France or New York. He took my shoulders and spun me around. Then he reached down into the pocket of his jeans. Said he was planning to do this more creatively. But no matter, he was doing it anyway. Dropped down on one knee in the dry, grimy roadway. He said if I say yes I would make him happier than a pig in a mud puddle. Said he would die trying to make me happier than that for eternity. Were pigs happy in mud? Or was that some bullshit myth? How can a person ever know? I watched two fat, sloppy tears steamroll down his cheeks. I whispered his name. Shane. Mom said it’s a real man, with a real love for a woman, that’ll cry for her. And she’s smart enough for me to believe her. With the palm of his hand, he swiped at his face. The nub shot me a wave. Say it, Ann Leigh. Say you will. He was begging, pleading. Both knees on the ground now. Yes, I’ll marry you, Shane. I will. He rose, pushed his mouth on mine. I tasted radishes. I wanted to puke. This must be what true love feels like.

One thought on “The Making of Nebraska Brown – Guest Post + Giveaway!”