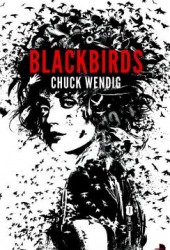 Miriam Black knows when you will die.

Still in her early twenties, she’s foreseen hundreds of car crashes, heart attacks, strokes, suicides, and slow deaths by cancer. But when Miriam hitches a ride with truck driver Louis Darling and shakes his hand, she sees that in thirty days Louis will be gruesomely murdered while he calls her name.

Miriam has given up trying to save people; that only makes their deaths happen. But Louis will die because he met her, and she will be the next victim. No matter what she does she can’t save Louis. But if she wants to stay alive, she’ll have to try.

The Black Prism by Brent Weeks

Gavin Guile is the Prism, the most powerful man in the world. He is high priest and emperor, a man whose power, wit, and charm are all that preserves a tenuous peace. But Prisms never last, and Guile knows exactly how long he has left to live: Five years to achieve five impossible goals.

But when Guile discovers he has a son, born in a far kingdom after the war that put him in power, he must decide how much he’s willing to pay to protect a secret that could tear his world apart.

Travel writer Lea Sutter finds herself on a small island off the coast of South Carolina, the wrong place at the wrong time. A merciless, unanticipated hurricane cuts a path of destruction and Lea barely escapes with her life. In the storm’s aftermath, she discovers orphaned twin boys and impulsively decides to adopt them. The boys, Samuel and Daniel, seem amiable and immensely grateful; Lea’s family back on Long Island—husband Mark and their two children, Ira and Elena—aren’t quite so pleased. But even they can’t anticipate the twins’ true nature—or predict that, within a few weeks’ time, Mark will wind up implicated in two brutal murders, with the police narrowing in.