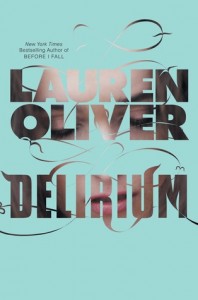 Imaging for a second living your life in a fog.  You get up, you go to work, do your duty and then come home.  You don’t stop to have a drink with the girls, you don’t get excited about your nephew’s 1st birthday and kissing your significant other is not something you do because you love them, it’s something you do because it’s expected.  Bright colors are frowned upon, poetry is blasphemy and the only music you are allowed to listen to is what “Big Brother” deems worthy. Image a life without passion. Passion for books, passion for movies…passion for people. Now imagine that all of this is completely natural. That missing all of these things, that the inability to form attachments, to “love” IS your life. What would be the point?

“Delirium”  is that world. A world where “love” is considered a disease, and what do you do with a disease? You find  a cure.

Lena is about to turn 18 and she is ecstatic, but not for the reasons you would expect. Boys, presents and even the possibility of chocolate cake pale in comparison to the thrill of being disease free. See… in Lena’s world “love” is considered the root of all evil, and in order to control this said evil, the government has developed a surgery to kill it. The problem? Not everyone believes that “love” is something to be ashamed of, and… until Lena met Alex she felt the same way. Suddenly realizing that her entire existence has been built around a mountain of lies, Lena starts to rebel; skipping curfew and party crashing.  Will Lena’s sudden need to be free catch up with her? Why is Alex suddenly acting so strange, and is the government right… will love be the death of her?

I would be remiss If I didn’t say this book left me torn.  Half of me wanted to run right out and tell everyone to snatch it up; that this book is “horrifyingly fantastic” but the other half of me (that annoying 2nd voice of mine) knew that that would be a lie.  See… there came a point in this novel where everything morphed.  The story became beautiful, heartbreaking in fact and the action seemed to wrap itself around the characters like an artfully crafted shawl, but up to that point (I’m gonna say about 85% in) the novel was a bit of a mess.  The leads, (though lovable) were a tad underdeveloped as a couple. Individually they shined; we learned about their tortured pasts and their personal issues, but together all we got was a manufactured rundown of their time together. What exactly does that mean? Well… it means there was little to no conversation between Lena and Alex.  It is true that the society in which they were placed frowned upon interaction between the sexes, but at the same time we were offered up PAGES of alone time. “We sat in an abandoned house,” “We walked along the beach,” “We played Scrabble with half of the letters.” Why, with all of the given opportunities did Oliver not allow her players to talk? If the reason behind it was to build tension, then I’m sorry the attempt failed.  All in all I think the remarkable ending would have left me completely breathless if I had been give additional dialogue.

Also (since I seem to be on the road to Bitchville) the development of Oliver’s dystopian society was a little overdone causing the story to drag in places it could have otherwise thrived. For example: at the start of each chapter there was a piece of literature from her governments approved reading list, (their bible, history books, nursery rhymes) but instead of adding to the complexity of her story all it did was act as a stop sign. I appreciate the attempt to educate the reader but it is important for the author to know where to draw the line.  Teach it, but don’t preach it, and NEVER stop your plot.

So where does this leave all of you? Well, it’s hard to say.  The first half of this book screamed for attention and if I had to base my review solely on it, I would encourage y’all to pass, however the second half of this novel was so well written, so shocking and unexpected, that telling you to simply “move on” would be (I feel) a tad cruel.  So instead, I’m going to recommend this: If you have other books that you just can’t wait to read, that have been nipping at your heals and you find yourself constantly drawn to… read them first; then… when that is under your belt grab a copy of “Delirium.”

3 thoughts on “All You Need Is Love”