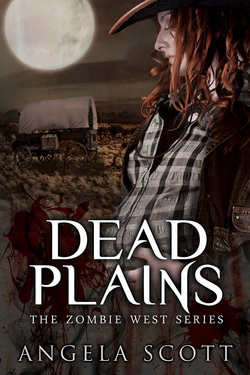 Sometimes, the ones you least suspect are the ones that should worry you the most.

People aren’t always what they seem, as Red has experienced all too well. Strangers are feared, towns are avoided, and everyone’s intentions are scrutinized… even those of the people closest to her. Her coveted ability has been revealed to far too many people, and now that a tiny heartbeat thumps and grows beneath her own, the risk has never been greater.

As the group of ten searches for a safe haven, a place to finally call home, the sobering reality of it all finally settles over them: nowhere is safe, nothing is permanent, and death is everywhere. One by one, Red’s reluctant posse grows smaller, as death claims some, and circumstance claims others.

It couldn’t be a worse time to bring a newborn into the world… but the baby is coming.

Well ladies and gents, this is it. The last book in the Zombie West series, and I have to admit…I’m a tad concerned. Am I concerned that people won’t enjoy it? No. Not in the slightest. Am I concerned that Angela has lost her ability to smoothly smash together to very different worlds? (Westerns and zombie fiction?) Nope. I’m concerned that Ms. Scott is trying to give George R. R. Martin a run for his money…when it comes to axing people. (*insert dramatic music*)

Yes, I AM aware that this is a zombie book, that people WILL inevitably die. (Hell, I watch the Walking Dead each week with the EXPECTATION that someone is going to kick it.) But I was shocked, SHOCKED I tell you by the extent of primary character deaths in this book! (Hence the Martin reference. That fool takes no prisoners.) Just when you think things are starting to go well for this tiny cast of characters BAM! Someone is lying out of their ass, getting turned into dynamite hash (wow, that was slightly insensitive) or being drained of all their blood by a mute medicine woman. (And that’s just in the first half.)

I may or may not have teared up a time or two (I admit to nothing!) but even that was quickly vanquished with gruesome (read: totally awesome) passages such as this:

“A legless zombie slid to the ground, raised himself on his bowed arms, and roared through his dangling jaw. Spittle clung to his chin as he pulled himself forward like a broken spider. His innards spilled on the ground, connecting him to the dirt like an umbilical cord, while his vacant eyes stayed transfixed on Trace. The determined zombie dragged himself along the aisle between the rows of rising undead.”

Pretty gnarly right? Big ups to Ms. Scott for incorporating the words: spider, umbilical cord, and dangling jaw into 3 sentences. (That should totally warrant some sort of “You make sick sound uber-rad!” prize.) But wait…that’s not all! Just when you think this 364 page jaunt through oogy oggy land can’t get any worse, you read this:

“She refused to believe that she’d gained anything of real value by eating her placenta.”

It’s ok…feel free to take a moment. I totally threw up in my mouth too. (Point. Angela.)

But what about the STORY Misty???

Ok, gore festivities aside, the plot (aka struggle for survival) found between the pages of “Dead Plains” was (in my opinion) the BEST of the three. While yes, it did seemed to take a tad longer to get to the point…the trials and tribulations faced along the way seemed more impactful than they had in the past. Red had to learn the difference between educated and blind trust. Trace was challenged more emotionally than he had been in the past. Wen was a little more front and center with HIS struggles. Rivers, crazy blonde machete girl, even Lasso (or Maverick depending on whose dog you think it actually is) had moments of true growth and heartache. (I’m not joking..the dog is what prompted the crying.) So, even though the flow of the story slowed a bit (which was bound to happen since Red is pregnant in this story) the well-developed character drama helped even the lag out. (Aka: I didn’t fall asleep while reading. That’s always a good sign.)

I wish I could tell you more but to be honest…I’m afraid I’ll throw more spoilers out than I intend to, so I’ll leave you with this.

“Dead Plains” is a solid end to a solid zombie series. If blood and gut is your thing…give these little gems a try. Oh, and make sure to read the epilogue at the end of this book. It’s totally worth it.

Happy reading my fellow Kindle-ites and remember: You don’t have to be faster than everyone, just SOMEONE.

Don’t want to wait to read each book, do the easy thing and purchase them all at once!

About the Zombie West Omnibus

The Wild West is hard enough to survive with its native territory, wanted outlaws, and harsh terrain, but with a plague turning civilized people into brain-eating monsters, survival becomes nearly impossible.

Red has lost everything to the fast-spreading disease: her family, her trust in mankind, and her hope for a better tomorrow. When she meets Trace, a smooth-talking gambling man whoís more city boy than cowboy, sheís forced down a path sheíd been avoiding for years. Until his arrival, sheíd lived by a certain set of rulesódonít ask names, keep to yourself, donít let anyone too closeóbut the jackass of a man wonít let her be, and he has an uncanny knack for appearing at all the wrong times and in all the wrong places.

Each, with a secret of their own, will need to learn that only by working together do they have any chance of surviving The Zombie West.

That is, if they donít kill each other first.

Angela Scott hears voices. Tiny fictional people sit on her shoulders and whisper their stories in her ear. Instead of medicating herself, she decided to pick up a pen, write down everything those voices tell me, and turn it into a book. Sheís not crazy. Sheís an author. For the most part, she writes contemporary Young Adult novels. However, through a writing exercise that spiraled out of control, she found herself writing about zombies terrorizing the Wild Wild Westñand loving it. Her zombies donít sparkle, and they definitely donít cuddle. At least, she wouldnít suggest it. She lives on the benches of the beautiful Wasatch Mountains with two lovely children, one teenager, and a very patient husband. She graduated from Utah State University with a B.A. degree in English, not because of her love for the written word, but because it was the only major that didnít require math. She canít spell, and grammar is her arch nemesis. But they gave her the degree, and there are no take backs.

2 thoughts on “Under or Out of Control?”