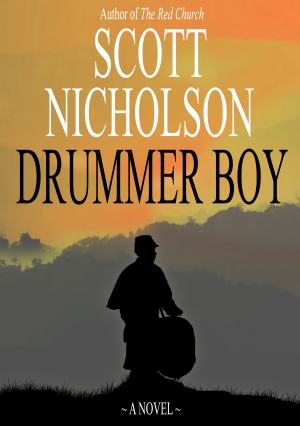 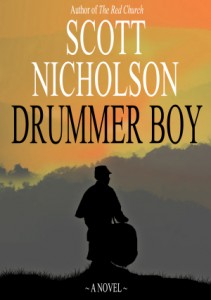 There’s a couple of things I have learned after reading a few of Scott Nicholson’s novels. 1.  I think he should see a psychologist. 2.  I am never EVER going to the Appalachian Mountains, and 3.  He gets better with every thing he writes.

While most authors fluctuate in their ability to properly express themselves from novel to novel,  Scott seems to get more creative, and structurally sound every time he puts pen to paper.

Psychological thrillers and Supernatural Mysteries are 2 of the more complex of genres to write, they not only require a well thought out and established plot but they also require insight into the side of human psyche that society as a whole likes to disregard… the dark side, and to be able to pull off not 1 but at least 8 of these is more than impressive… it’s astounding.

“Drummer Boy” is just one more example of what Nicholson does best.  He takes folk tales (whether the tales are in his head or real is beyond me) and then spins them into a battle of wits between a large and complex cast of characters.

The Mountains are speaking, but the tiny town of Titusville isn’t exactly prepared for what they are saying. More focused on their upcoming Civil War reenactment than the whispers, the towns citizens chalk up a rash of mysteriously dressed soldiers to, too much booze or visiting actors, its just to bad that they blow off the fact that these same men seem to flicker and disappear with the blink of an eye.  Are these men really a troop of ghostly soldiers hell bent on finding a deserter and changing their fate, or are they just figments of a towns already over active imagination?

Nicholson’s characters were (once again) beautifully detailed and the overall plot was so “twisty turny” that it could keep any mystery junkie on their toes and flipping pages.

All in all…quality writing…good read. I don’t think it gets much easier than that.

Happy reading my fellow Kindle-ites and remember: if you hear banjos… I do not recommend running for the hill, there is some pretty creepy shit up there.

One thought on “Did I Really Just See That?”