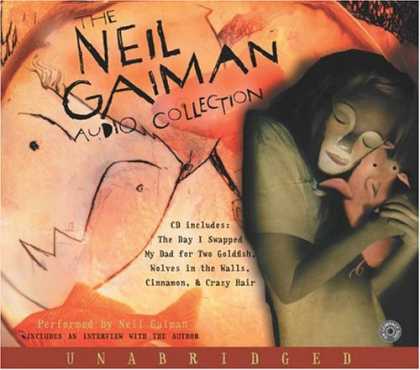 For those of you that don’t know, I am a huge Neil Gaiman fan.

The very first time I was introduced to him was way back in 2002 when I (for no apparent reason) decided to check out his book “Stardust” from my local library. Instantly enthralled I read the 256 page novel in just a few hours – swearing off food and water for fear of being interrupted for a potty break at a crucial moment.

Once I finished I put the book on my kitchen counter and returned to civilization. But the story didn’t fly away, like so many before it had. Instead it made a home inside my head, a constant loop of lyrical prose and brilliant technocolored imagery. It began to take on a life of its own. The story continued to grow, the characters taking on whole new lives, journeys and meanings.

The following day (all before 7am at which time I needed to be at work) I walked past that kitchen counter 10 times. Each time sweeping my hand across the cover of that book. By noon I had left work, claiming some ridiculous ailment, that I’m certain sounded fake even to my overly empathetic boss. I got in my car, drove home, and picked the book up again. For the second time in two days I found myself reading the exact same words.

Since then I have purchased everything Neil has every written. Not in Kindle format (as shocking as that may sound) but in hardback, so I can lovingly place it on my shelves once I’ve finished reading it. I have never given it another thought. It is just something that I do. A quirk if you will. That is…until today, when for the very first time I heard Neil narrate one of his own stories.

While sitting in my car, waiting for my son to get out of school, I turned on his latest short story (Shoggoth’s Old Peculiar – which was free to promote his latest release but has now vanished into thin air) With no expectations other than a little wasted time, I settled in my seat, closed my eyes, and opened my mind. But much like in 2002, when I read the first 3 lines of Stardust:

“There was once a young man who wished to gain his heart’s desire. And while that is, as beginnings go, not entirely novel (for every tale about every young man ever was or will be could start in a similar manner) there was much about this young man and what happened to him that was unusual, although even he never knew the whole of it. The tale started, as many tales have started, in Wall.”

the exact moment I heard Neil speak, I knew something inside of me had irrevocably changed. I would never “read” a Gaiman book  again. I would only ever listen to them, in his own voice, they way they were intended. Because nothing I have ever heard, has sounded as beautiful.

But don’t take MY word for it, let him convince you. 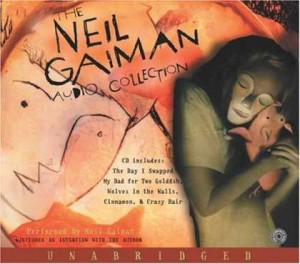 Find it on Audible HERE

The Day I Swapped My Dad for Two Goldfish
An unforgettable story that will take readers on a journey into the murky mind of a young boy and the perils of striking a bargain.

Cinnamon
This charming fable of an exotic princess who refuses to speak currently exists only on Neil’s official Web site and has never been published in print or any other format.

Crazy Hair
Bonnie tries to comb the narrator’s crazy hair where gorillas leap and tigers stalk, and is in for a surprise in this delightful rhyming tale.

After listening to “Shoggoth” and then immediately realizing that reviewing it for the blog would be impossible, I decided to purchase another one of Neil’s short story collections. This time hoping to let my son in on all the fun while running my afternoon errands. What I expected was slightly off-kilter Neil. What I got instead was laugh-out-loud Neil (with an admitted side of predictable off-kilter-ness.)

While I won’t go into drastic, overly analytical detail about each story (with the exception of telling you “The Day I Swapped My Dad for Two Goldfish” was the best of the four) I will say that they are expertly written. Magnificently executed, and just what the doctor ordered for a few minutes of down time. Capturing not only me, but my son from the very first word Neil Gaiman did what Neil Gaiman does best: He set our imaginations free. I highly recommend this collection for parents as a way to spark a love of literature. Not too scary, but witty and smart…they will make fantastic bedtime stories. All you have to do is sit back and LISTEN with your child. It doesn’t get much better than that.

Listen to Neil read chapter one from The Graveyard Book