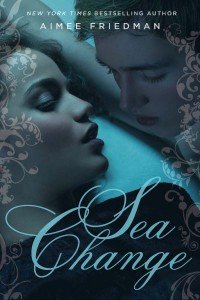 So…the story goes: Girl goes to a new place, meets mysterious boy, meets not so mysterious boy, of course decides she really likes the one everyone disapproves of, thinks there is something “fishy” going on with him, freaks out, runs away, goes back to boy…the end.

Yes-ok-I-know…there has got to more to it than that. Well, sorry there really isn’t that much more but I’ll try to be a little more positive or at least descriptive.

The book wasn’t bad…per say…It was just a little disappointing. “Aimee Friedman” taunted her audience with the possibility of a fantastic book and then in the end just…dropped the ball, or pen…however you would like to see it.

The writing was actually decent, if you don’t take into account how fast she had the plot moving along (girls love a good tease with their story) but in a book that has no for seeable follow-up, I think it’s necessary to tie up loose ends. In that regard, this book was all over the place.

“Friedman” simply had too many plot lines going at once and only chose to resolve a few of them, and naturally not the one that was the most important. (It was implied.. but lets face it…implied just doesn’t sooth the mind.)

Miranda is a science geek, bred of 2 very intelligent parents it was bound to happen, but she never thought her scholarly mind would take a backseat to boys and mythical legends. After the sudden death of her estranged grandmother “Isadora” Miranda and her mother are shipped off to a Southern version of the Hamptons to deal with the logistics of selling the family mansion, but after riding over on a ferry, complete with a creepy captain and his even creepier stories of sea monsters, Miranda isn’t so sure of herself anymore…or her surroundings. Her mother suddenly morphs from prestigious New York City plastic surgeon to Southern Matriarch of the Eastern Seaboard, triggering Miranda to do what any other girl would do….she runs… in total panic and finds herself in the arms of a cute but very secretive local beach boy. After struggles with mom and a very tearful chat with hottie number 2 she decides that life is complicated…and she should just suck it up and deal with it. (No… I’m not kidding… that was the outcome.)

There were pretty teenage socialites, a narcissistic boy who loved his own reflection, a mysterious trunk in the back of a closet, very enlightening love letters, and 1 moment of underwater clarity/confusion.

Overall the book was ok. It was a quick read (1 day max) so if you do decided to read it it wont take to much effort or time. I’m not going to say with certainty that you will not like it, because I’m a little on the fence… I think the end just irked me more than I’m willing to admit. Here is my advice…when you have read everything else that you “just can’t wait” to read…then chomp into this one.

Happy reading my fellow Fishermen and remember: If you feel an overwhelming need to swim in the surf at night… be sure to wear your floaties.