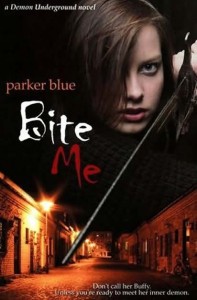 With the exception of the “classics” I haven’t been all that thrilled with my free Amazon finds. The majority of them are in need of a diligent editor and if their writing isn’t the problem, 9 times out of 10 the plot is, however… the one thing I DO think they are great for is finding new “series reads.” (Yes.. I know… I shouldn’t be starting anymore series) A few times a month you can find a starter novel (by an established author) up for grabs for 0 denaro. The purpose of these finds are obvious, get 1 free buy the next 5 when you’re sucked in. The problem only arises when you miss the 24 hours they are up for grabs.

Last week I was lucky enough nab “Bite Me” (Book 1 in the Demon Underground series.) by Parker Blue, and while I was expecting no more than a fluffy little vampire piece I was so please with it that I have already purchased book #2 (mission accomplished you evil publishing geniuses!)

Val isn’t like most girls her age…she’s a demon. No… not the green scaly kind more the raging hormones succubus kind, but her inner demon (who she has lovingly named Lola) is the least of her problems. After her bratty 16 year old sister decides to follow her out of the house one night Val’s parents have finally had enough. They cut her off and kick her out. So what exactly is a 18 year old vampire hunting demon girl supposed to do with no place to go and no money? Well… she goes to the police, that’s where. Hoping her (and her hell-hound Fang’s) slayer skills could be of service she makes a play to join the force and take control of her life, but when her sister disappears again and turns up at a local blood bank Val decides that tough love is the only answer. Will her sister ever snap back into reality? Where are all these rogue vampires coming from, and more importantly can she keep the cork on Lola?

Parker Blue opened up a whole new door in the “vampire vs. demon” debate making (for once) the demons the good guys and the vampires the bad (who would have thunk it.) AND she did all of this while skirting the line between YA and Adult paranormal. The plot (thankfully) moved along at a nice steady pace, dueling between action and suspense (the who done it) and to add icing to the cake she had a few (very artfully crafted) angst scenes thrown into the loop. (Hello!!! she is a lust demon for Christ sake.) The development of her characters was very nicely executed (and to be honest) done in one of the most unique ways I’ve read in a while. (Through conversations with her hell-hound.)

There’s not a whole heck of a lot of negative I can spout about this book, with the exception of the ending. It felt short and cut off… like at the last second she decided to make this a book 1, but thankfully that little problem will be resolved with the quick access to book 2. (which came out in March.) Would I have purchased this book if I had only ever seen it at the $9.99 price? Who knows… but I’m here to tell you that if you are a vampire lover I think it’s worth your time.

There were charming vampires in black cloaks, evil ex’s, see through demons, a mind reading mutt, a clueless mother, and 1 girl that hates being called Buffy but loves doing the job.

Happy reading my fellow SCU and remember: Just because you THINK your dog is asleep… doesn’t mean he is. Think about it.