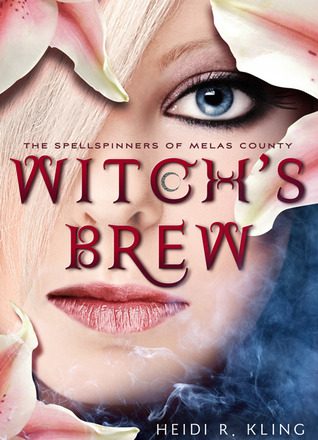 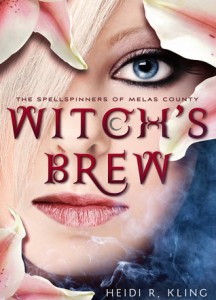 When I was about 11 years old I discovered the wonderful world of “choose your own adventure” books.  My teacher was thrilled. It kept me in the classroom much longer and out of the library exchanging books every other day.  Me? I was just thrilled (the stubborn child that I was) to be offered the chance to make up my own mind.  See, I am the girl who screams at the TV when the dumb blonde (who will eventually be the heroin of the movie) runs UP the stairs when the big bad wolf  is after her vs hauling her skinny ass out the door.  With “choose your own adventure” books I finally had that opportunity to throw my two cents into the pot (unlike with with the super bimbo) and tell the characters which way I wanted them to go.  The ending is going to be the same (or course) that is an inevitability that never changes, but I (the READER) got to decide which road to travel down on the way there. (Aka…Barbie hoofs it out the back door.) Witch’s Brew by Heidi R Kling is the next generation of “choose your adventure” literature (or as Heidi prefers to call it “Choose your own destiny”) She sets the story and we get to “help” decide the path the characters take.

Once soulmates, the witch & warlock covens have been estranged for a century. Twice a year, their teens meet in the Solstice Stones, a magical battleground, to draw energy from each other. Logan & Lily have trained their whole lives for the Stones. In Witch’s Brew, Lily is torn between her feelings for Logan & her loyalty to her coven. The lovers race against time, their distrust for each other & their powerful elders to unravel the mystery of the past before their future is destroyed.

So let me give you the semantics to this new style of novel (or episode) first so you get an idea of what exactly it is you are getting yourself into. Spellspinners (which is the title of this series) is an “Active Fiction” title, a new type of e-book from Coliloquy that actually runs like an app as apposed to a book (aka you can’t highlight passages or use the dictionary if you find yourself stumbling over a word.) In this particular Active Fiction series, your input influences future books from this author. (Like I said above…this is only episode 1) In Spellspinners, your input influences what happens to star-crossed lovers Logan & Lily.

Now, on to the actual story. (Cause that’s what we really care about right?!)

I really enjoyed it.

What? I can’t leave it at that? Dang. (Can’t fault a girl for trying.)

Normally I’d take this opportunity to go on and on (in exhausting detail) about the characters and their development in the story. Well phooey on that. I’m not gonna do it.  In short they were great.  Well establish. Nicely detailed and engaging. But that’s not what held my interest in “Witch’s Brew.” The story was. Yay story!! *throws confetti*

“Oh but Misty! This is a forbidden love story, how can it not be about the characters?”

Now, now…calm down.  I didn’t say it wasn’t ABOUT the characters, I just don’t want to talk about them. I want to talk about the Hatfield and McCoy type fued between the Witches and the Warlocks. The witch apoclypse that seems to be lurking around the corner, and the creepy eel like things that have apparently lost all of their good sense.

There was action when I didn’t expect it. Deciet when there should have been desire and because of these I was enamored (aka I stayed up until 4am reading.) Which leads me to the characters. (Sorry…I just can’t help myself. It’s like a tick. *smacks head*)

For a story that was chocked full of love, lust and compassion it was suprisingly complex.  We are introduced to a large cast; friends, mentors, family and foes, all of which have their own ups and downs, not just Logan and Lily (whom the story is centered around.) The inclusion of such a large cast (even though they aren’t narrative) adds a fullness to the story that I think was necessary to make it truly interesting. Without the influences of the supporting cast (anger from the Master Warlock, jealously from the local barista) the actions of the leads would have felt flat. Less forbidden and more straight forward.

Add this to the aforementioned plot points and what you get is a down right interesting read gosh darnit! (Holy crow, my Texas is showing.)

I was sad when I was left hanging.

I felt a connection to the characters and the excruciating trials they were facing.

And I loved that I got to go back and read it in a different light once I was done.

Overall…I really enjoyed it. (Hmmm… I think I’ve already said that once.)

Great for fans of YA and anything magical.

Happy reading my fellow Kindle-ites and remember:  2 for the price of 1 is always better!