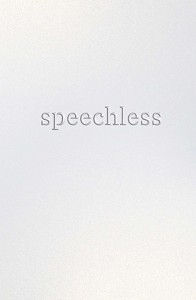 Some of you may not know this about me, but I have two small children. Because of this, I find myself reading a significant amount of contemporary YA fiction. Besides the fact that I actually enjoy the angst of a well thought out plot, I thrive on the lessons they teach me (as not only a living breathing human being but) as a parent.

Having read Hannah Harrington’s debut novel “Saving June” (which I blubbered through like a raving lunatic) I knew I had to read “Speechless” the second I saw it.

Because Harrington has this uncanny knack of establishing gross emotional involvement in the hearts of her readers. Which little ol “emotionally devoid me” tends to enjoy. In “Saving June” she tackled loss. In “Speechless” she introduces her audience to the repercussions of deceitfulness, naivety, gossip, and bullying; while at the same time showing how beautiful someone can be in the midst of learning these difficult lessons.

Everyone knows that Chelsea Knot can’t keep a secret

Until now. Because the last secret she shared turned her into a social outcast—and nearly got someone killed.

Now Chelsea has taken a vow of silence—to learn to keep her mouth shut, and to stop hurting anyone else. And if she thinks keeping secrets is hard, not speaking up when she’s ignored, ridiculed and even attacked is worse.

But there’s strength in silence, and in the new friends who are, shockingly, coming her way—people she never noticed before; a boy she might even fall for. If only her new friends can forgive what she’s done. If only she can forgive herself.

For review purposes, I’ll go ahead and throw out the big bomb first. “Speechless” was not as good as her debut novel. That said, it was still enjoyable and well written (and yes, I still cried.)

In the beginning of this novel we are  introduced to Chelsea. And in the interest of full disclosure, I hated her almost immediately. Here was a girl who was ok being used like a puppet. She wanted to be popular, and was willing to maintain her social status at any cost.  She spread rumors about anything and everything. She blackmailed people who she viewed as “beneath” her. She was selfish, rude, and hurtful on multiple occasions. But, my instant dislike of her is what made the rest of the novel work.

At a party (one in which she lied to attend and then gets smashed beyond oblivion) Chelsea happens to bump into a well hidden secret. Being the opportunist she is, she blabs the secret (very unceremoniously) to an entire room full of other drunk teenagers. People react, they scream, yell, text other people the secret and then go about their business. Or so Chelsea thought. The next morning she wakes to find out this secret almost got someone killed.

Having a brief moment of conscience, she goes to the police and explains the situation. The situation happens to involve her close circle of (very unforgiving) friends. Who then decide to ostracize her.

This is the moment she decides “talking” is overrated, and takes a vow of silence.

Now, I could continue to go on and on about all of the trials and tribulations that come along with Chelsea’s decision, but then the book would lose some of its gusto (if you decide to read it) so I’ll say this instead.

Harrington brilliantly portrayed the brutality of bullying. She conveyed a heart-wrenching tale of redemption, and she illustrated the freedom that forgiveness can afford those who think they don’t deserve it. She taught us that people CAN change, even if they didn’t really want to. And she educates her readers in the fine art of tolerance.

Even with a lack of traditional dialogue, this character driven story is sure to make its mark on more than a few people. All you have to decide now is whether you want to learn those lessons now or later.

Me? I’m glad I have them in my arsenal for future use.

Happy Reading my fellow Kindle-ites and remember: Think before you talk. You never know how something you say can effect those around you.