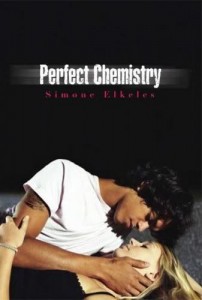 The last couple of novels I’ve read (if you’ve been keeping up) have been fairly strenuous on the emotions, so needing a break and an “easy read” that WAS NOT given to me by an author I decided to run to my local book nook and pick up “Perfect Chemistry.”

Back in March I reviewed “Leaving Paradise” also by “Simone Elkeles” and loved it, so going with the assumption of “if one was good the other is probably not that bad either” I threw my Visa on the counter and purchased a beautiful shiny new book.

I was shocked when (after flipping the last page) I realized I wasn’t all that impressed.

“Perfect Chemistry” was penned AFTER “Leaving Paradise” and while comparing the plots is irrational comparing the writing quality is necessary. I’m not exactly sure what happened to “Elkeles” writing process after LP but it is safe to say her writing quality declined and her attention to character development was significantly less than spectacular (detail with Alex, fluff with Brittany.) The only thing that saved this book was the concept.

Brittany is a grade A top choice high-school hottie with an equally appealing boyfriend and GPA. Alex is… not. Coming from the wrong side of the tracks (and being a gang-banger) Alex lacked that certain appeal to not only his teachers, but his new Chem partner. After being told (not so subtly) that there wasn’t a chance in hell that he would ever be known to Brittany as anything more than dust under shoes, Alex does what every other wannabe bad-ass high-school boy does…he makes a bet that he can get into her pants. What Alex didn’t plan on, however, was falling for the girl, the girl he realized was 5% drama queen and 95% loving sister. Do opposites really attract? Are people really who they pretend to be, and in the face of danger will they sacrifice themselves for the person they love?

“Elkeles” angst moments were expertly expressed (as usual,) however the rest of the novel felt as thought it was written for a 12 year old. The prose were sloppy, the dialogue felt forced in several places, and even though the plot flowed smoothly it seemed as though “Elkeles” just lost her gusto. To be honest, the most impressive part of the entire novel came in the last few chapters where glimpses of “Elkeles” previously found talent finally appeared.

There is definitely an audience out there for “Perfect Chemistry,” and that said audience (I’m quite certain) will be more than happy with their little literary find, but for the rest of us, the ones that loved “Leaving Paradise” be forewarned, you will not “feel” the emotion and you will not be on the edge of your seat. Simply put, you will read it, you will probably enjoy it (because the story was actually intriguing) and then you will stack in on your shelf and forget all about it.

Here’s to hoping the sequel will be better, because this one was “just another book.”

2 thoughts on “Here’s To Group Projects!”