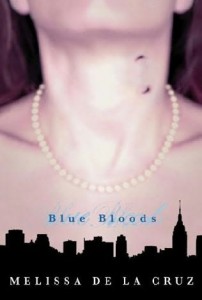 Let me just start this review by stating… if you are author “Melissa De La Cruz” you should probably NOT read this review, unless you feel like crying today, and then by all means, please read on.

This book was a mindless ramble of Upper East Side-Soho name dropping. I actually started wondering, 6 chapters in, if De La Cruz was being paid endorsement frees for the amount of swooning she was doing. This book was SUPPOSED to be about vampires…which it was…abstractly; but if the author was being honest with herself it should have been titled, “How To Survive Rich Bitchy 16-Year-Olds Who Think They Rule The World” It would have been significantly more accurate.

The writing style was obscure, swinging from several different characters’ perspectives all at once, kind of like a book with schizophrenia, or multiple personality disorder, which… if I’m going to be completely honest, the writing “schizophrenically” or not was dismally spectacular to begin with. There was an alarming lack character development, lame “journal” entries, and hastily written unsatisfying angst scenes. Which lets be honest, are the glue that holds the vast majority of these books together.

I was not… even in the remotest way… interested in this book until about 85% in, when a formidable plot finally appeared. Unfortunately it disappeared just as quickly as it had been formed, galloping from a murder mystery tet-a-tet to a Sunday morning church sermon, complete with fallen Archangel and pathetic Gabriel references.

The last 5% of the book was good, but by that point… who even cares anymore?

I’m not certain if I’m going to even attempt to read the follow-up novel, but you never know…the mood may strike me and I may feel like giving De La Cruz a reprieve… until then, read if you dare, but don’t say I didn’t warn you.

Oh, and P.S. If do indeed plan of reading this waste of good Kindle storage, make sure you drink lots of coffee so you don’t fall asleep and ruin your pretty couch cushions with drool.