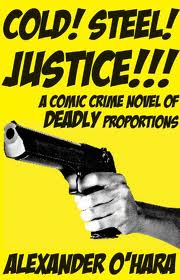 There are two very disctint things I remember about my dad from when I was little. 1.  He loved John Wayne. So much so that he had this stupid (and I say stupid because I broke the damn thing 5 times and had to superglue it back together before he got home) ceramic figure of him that sat on a shelf in our living room and 2. Clint Eastwood, the “Dirty Harry” “Make My Day!” phenom whom inspired my name. ( Which, for the record I do not state with pride.)

Both of these men were rough, tough, and took shit from no one.  It was their thing, their monikar.  If you messed with them your ass either got shot, or your nose got broken , (it was usually your choice.)  and because of them,  the definition of “badass” was written.

Since the days of “The Lucky Texan,” “Blue Steel” and “Fistful of Dollars” we have been introduced to a new (even more cliche’d – if that’s even possible) genre of “cult classic” film…the 80’s cop movie. These are not your box office smashers or even the well thought out ridiculousness of movies like “Lethal Weapon” or “Beverly Hills Cop” no, these are the straight-to-DVD, clearance rack, reduced-for-quick-sale types that combine all the elements available for cop drama and smush then into a one and a half hour long package. These films are NOT to be taken seriously, given credence, or even raved about, they were not made to break records or floor the people at Sundance, no… these little gems were thrown together (half-hazardly in most cases) with one thing in mind, cheap laughs.

Why is this important to understand? Because “Cold! Steel! Justice!”  by Alexander O’Hara IS an 80’s cop movie smothered in Eastwood attitude with a dash of John Wayne give a shit. It is not classic literature, it is not a book you tell your neighbor about, it is the book you read, roll your eyes at and then find yourself (shamefully) quoting for days to follow. It is pop-cultured, synonym driven dribble with only sparks of intelligent plot points, but (and oh dear God, I may regret saying this later) it works. (*stuffs reputation back into pocket*)

IN PARADISE CITY, ALL HELL IS ABOUT TO BREAK LOOSE…
Renegade ex-cop Christian Beretta was kicked off the Dice City Police Force for being “just too damn violent”. Now he’s BACK – and teaming up with his old partner/sidekick, the gnarly-but-kindly Chief of Police and his feisty ex-girlfriend (who’s resurrected from the dead) for the toughest mission of his life. An evil Irish-born Mayor aims to take over the illegal drug trade and execute criminals on live TV – and only Beretta can stop him…

First, let me talk about the problems I had with this book, and then I will go into why I enjoyed reading it.

O’Hara’s writing is actually (at it’s shiniest of moments) sub-par. The flashbacks in the story were too long, (constantly interrupting the flow of the book,) the main plot didn’t even appear until the 32% mark (because of all of the damn flashbacks) and the narration was a weird hybrid of 1st and 2nd person accounts (think of it as written from Beretta’s pov but with sudden breaks for author assurances)

Now…how in the world can it be good when I basically just said the writing and plot blew? Well, the wit overpowers the writing and (even though) I found myself sighing heavily at the constant flow of blatant sarcasm, I realized that THAT (the references to fat donut eating cops and guns so big they could take down The Hulk) was what the story was all about.

Let me give you a few examples:

“Beretta bit Back the angry words racing towards the front of his mouth like a pack of hungry dogs chasing a sausage tied to a tailpipe.”

If you can handle your plot being constantly (and I mean every other sentence constantly) interrupted by ramblings like these and you found yourself chuckling at them (even if it was to yourself for fear of being discovered) than I can pretty much guarantee that you too will enjoy this read. But if you are a person who needs a “point,” something “more” than:

“smart quips, daring deeds, racial stereotypes, gratuitous nudity, men wearing bandanas in flagrant contravention of all rules of taste, and at least one scene where a Mexican druglord is incinerated in his own car.”

then this is MOST DEFINATELY not a read you will enjoy. (I’m pretty confident that my flagrant need for sarcasm is the reason I was able to overlook the atrocity that this book actually was.)

My advice…indulge at your own risk.

Happy Reading my fellow Kindle-ites and remember: they call it slap-stick for a reason, I hand you this stick and you slap me over the head with it for giving this book a 3.

2 thoughts on “It’s A Sarcasm Super-Sale!”