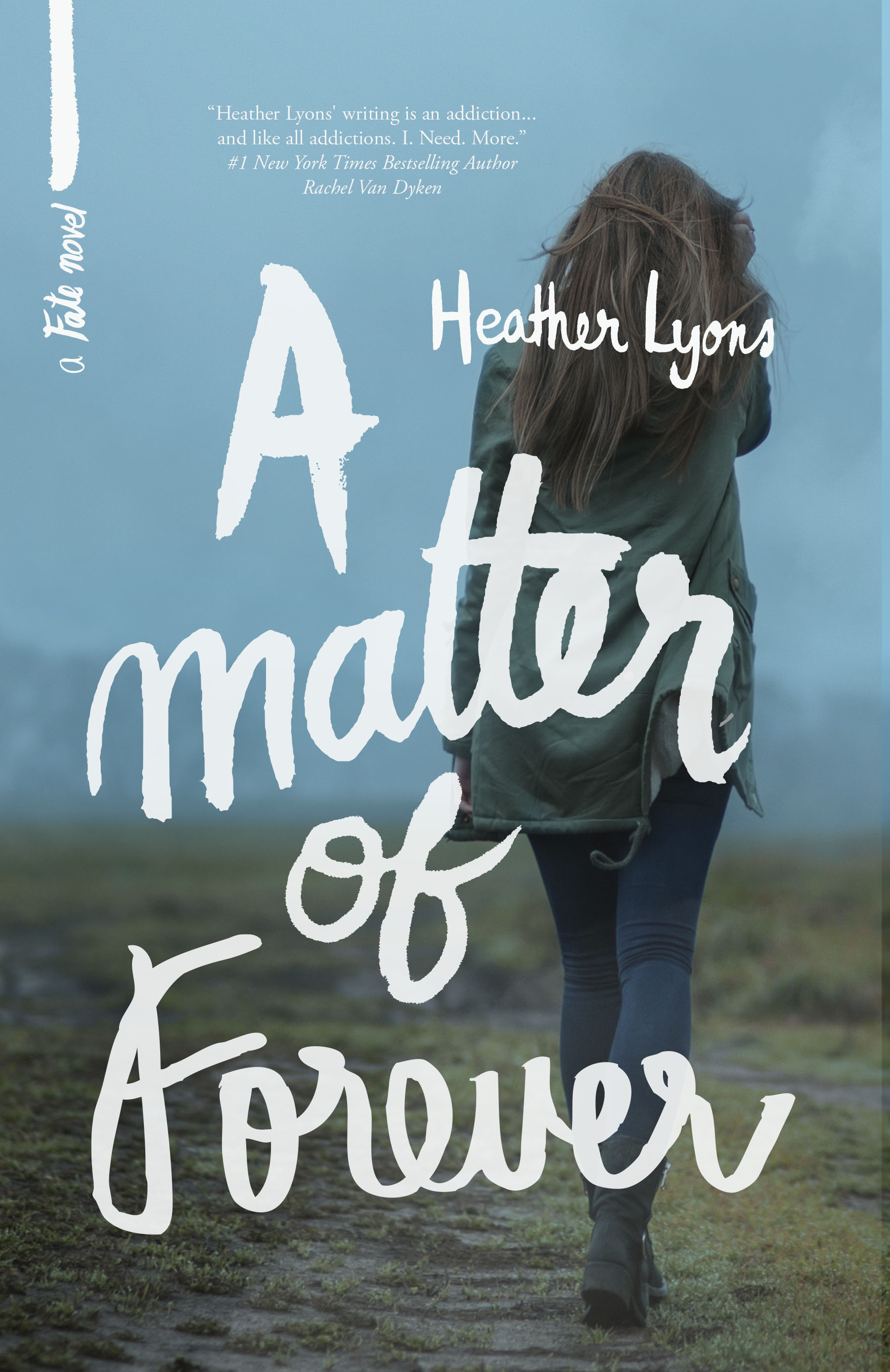 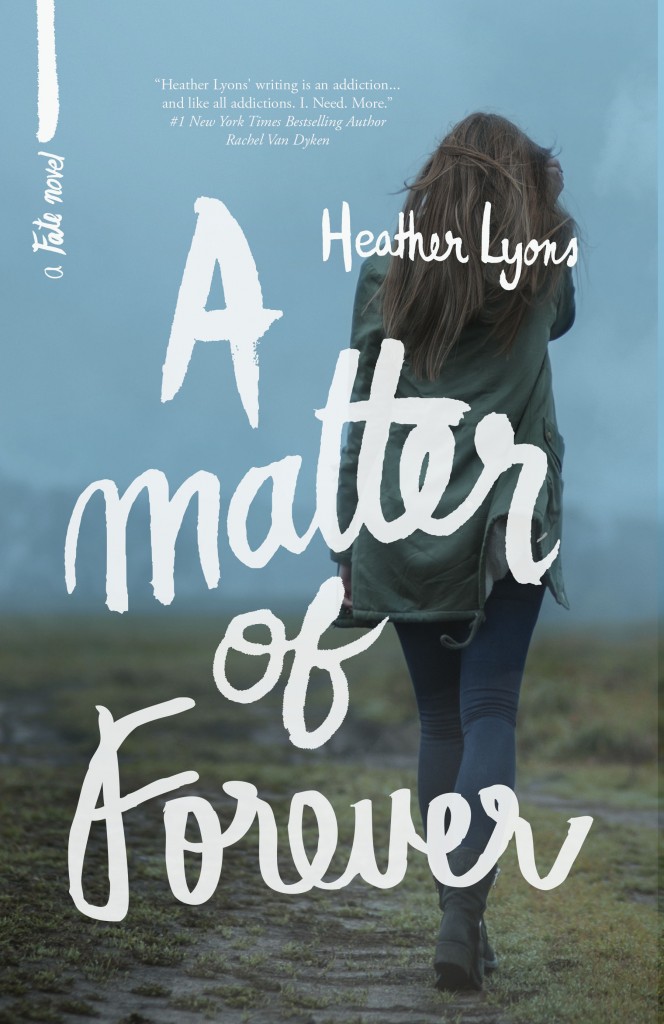 A Matter of Forever by Heather Lyons

Chloe Lilywhite has struggled for years to find her footing in a series of dangerous and demanding worlds. Creator, first tier Council member, and one of the most powerful Magicals in existence, she was little more than one of Fate’s pawns. But now, Chloe is back home and ready to call the shots. She knows what she wants and who she wants to be.

Except the Elders never got the memo.

Annar and Magical-kind are under attack. The lives of Chloe’s loved ones, and life as they know it, are at stake. Chloe’s the key to taking the Elders down, but they won’t go quietly into the night.

This time, neither will Chloe.

Karl’s in the kitchen, making crepes. It amuses me how many of my friends are foodies and I manage to still ruin water when I attempt to boil pasta. “You mean, like hand-to-hand combat?”

I steal one of the broken crepes littering the counter next to the stove and shove it in my mouth. “Yesh.”

“I have a black belt in Brazilian jiu-jitsu,” Iolani says suddenly. She’s over at the refrigerator, pulling out a carton of grapefruit juice. She smiles winningly at Karl. “I am a Volcanic and a black belt. We ladies are quite badass, you know.”

Well now. This is quite convenient if I do say so myself. “Do you think you can show me some moves?”

“Let me check my schedule.” She pretends to pull a list out of her pocket. “Hmm . . . mm-hm. Yep.” The imaginary list is stuffed back in her jeans. “I suppose I have a little free time I can slot you into. But only a little, mind you. I’m quite busy down here.”

I toss one of the broken crepes at her; she giggles and easily dodges it.

“Yes, you’re so busy,” Karl drawls. “It must be so exhausting, watching all of your soap operas one after another. What will you do if you miss an episode? Will Joe ever tell Jane that he screwed her daughter? Will Bob ever let Mary know he had quintuplets with the nurse that woke him up from brain surgery?” A sly grin curves across his lips. “Inquiring minds must know!”

“It’s Marcel who cheated on Felicia with her daughter.” Iolani sticks out her tongue. “And Rudolpho and Estelle with the quintuplet problem. But my, my, Karl Graystone. Don’t you know these storylines just as well as I do? How very scandalous of you.”

I burst into laughter. “She’s got you there.”

He sighs, but he’s chuckling, too. “Moira is obsessed. It’s like osmosis. Even Em is more interested in watching them than her cartoons. And now Lani here is watching them day and night with the volume turned way up . . . it’s like I can’t escape.”

“I’ll tell you what, Graystone.” Iolani pulls a glass down from the cupboard and pours herself a drink. “How about you watch my eppies for me while I’m working with Chloe? That way, I can get all the deets from you and it will be like I haven’t missed a step.”

I crack up all over again at how he pretends to be so excited at this. “Can I? Really? We can debrief afterward!”

Iolani kisses her hand and pats her butt. “You know you want to know.”

“Whatever.” He turns to me. “Why the need to fight? You’re a Creator. I’m pretty sure you can best anyone without having to throw a punch.”

I hop up on the counter. “You’ve seen how the Elders tear me apart.”

Both eyebrows shoot up. “You want to physically fight Elders? Like . . . with your hands?” He shakes his head. “Chloe, I’ve been with you in several of those fights. You don’t need to land a punch. You have your bow, not to mention all you need to do is touch one and it’s gone.” 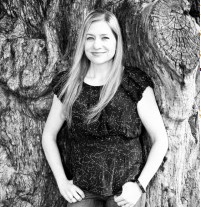 Heather Lyons has always had a thing for words—She’s been writing stories since she was a kid. In addition to writing, she’s also been an archaeologist and a teacher. Heather is a rabid music fan, as evidenced by her (mostly) music-centric blog, and she’s married to an even larger music snob. They’re happily raising three kids who are mini music fiends who love to read and be read to.

And don’t miss the first books in the Fate Series!

A Matter of Fate Synopsis
Chloe Lilywhite struggles with all the normal problems of a typical seventeen-year-old high school student. Only, Chloe isn’t a normal teenage girl. She’s a Magical, part of a secret race of beings who influence the universe. More importantly, she’s a Creator, which means Fate mapped out her destiny long ago, from her college choice, to where she will live, to even her job. While her friends and relatives relish their future roles, Chloe resents the lack of say in her life, especially when she learns she’s to be guarded against a vengeful group of beings bent on wiping out her kind. Their number one target? Chloe, of course.

That’s nothing compared to the boy trouble she’s gotten herself into. Because a guy she’s literally dreamed of and loved her entire life, one she never knew truly existed, shows up in her math class, and with him comes a twin brother she finds herself inexplicably drawn to.

Chloe’s once unyielding path now has a lot more choices than she ever thought possible.

Beyond Fate Synopsis
There are always two sides to every story . . .

His whole life, Jonah Whitecomb has strove to meet everyone’s expectations of him: the perfect student, dutiful son, loyal twin, accomplished surfer, and powerful Magical. But behind his carefully composed façade hides the truth of how his family has fallen apart, leaving Jonah more often than not feeling adrift. To complicate matters, he fell in love long ago with a girl in his dreams, one he’s never told anyone about, including his twin brother.

Just when life seems its bleakest, Jonah discovers that Chloe is real. Wanting to finally reach out and grab happiness for himself, he embarks on a journey to track down the girl of his dreams, only to find that happy endings aren’t always guaranteed, the best laid out plans can go horribly awry, and sometimes, you have to simply let yourself go along for the ride.

A MATTER OF HEART (Fate Series #2)

A Matter of Heart Synopsis
No longer in high school, Chloe Lilywhite is now living and working in Annar, the Magicals’ city-state plane of existence. Since moving, she’s joined the Council, gone on missions with the Guard, moved into her own apartment, and enrolled at the University of Annar. Plus, she’s happily engaged to be married to Jonah Whitecomb, the literal man from her dreams, not to mention her Connection. While she still struggles with aspects of her craft, Chloe feels like she’s finally coming into her own, especially after a difficult year that had her questioning nearly everything in her life.

After a brutal attack by the Elders, her life is turned upside down once more. Accusations fly throughout the Council and Guard, forcing Chloe to confront her worst fears about what’s she’s capable of as a Creator. And then there’s the matter of Kellan Whitecomb, Jonah’s twin brother and Chloe’s ex, who resurfaces after disappearing months before. Although Chloe chose Jonah, and despite their best efforts, the two find it hard to stay away from one another.

But no matter what Fate throws at her, Chloe is determined to take charge of her life, even as it begins to spiral out of control.

A MATTER OF TRUTH (Fate Series #3)

A Matter of Truth Synopsis
Not long ago, Chloe Lilywhite seemingly had it all: a prized spot on the Magicals’ Council as lead Creator, a loving fiancé and Connection, and a wealth of good friends. But the poised young woman she projected was nothing more than a façade. Her parents all but disowned her. Power plays and accusations of murder within the Council rocked her confidence. And most difficult of all, her secret, a secondary Connection to Jonah’s twin brother, Kellan, became painfully impossible to resist. Desperate to gain control over her rapidly unraveling existence, Chloe did the unthinkable: she ran away.

Now living and working in Alaska under an alias, Chloe is slowly discovering who she is and, more importantly, who she wants to be. But the more she tries to leave the Magical world behind, the harder it becomes to stay hidden. The Elders are back with a vengeance, and the stakes have never been higher. Chloe finally has to make a choice: embrace her pre-ordained Fate or pave her own way in the worlds. One thing’s for sure, though—she’s finally up for the challenge.

One thought on “A Matter Of Forever – Excerpt + Giveaway!”