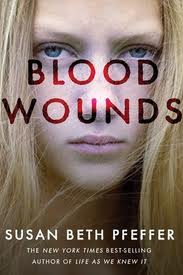 Well, it’s been a while since I’ve had to write a “less-than-glowing” review, so the fact that it comes at the expense of an author like Susan Beth Pfeffer, (The Survivor Series) seems ironically fitting.

Before I get into paragraphs of explicit details, let me start off by saying this is NOT an overly pleasant read. The main plot aside (guilt for her father’s actions) Pfeffer decided to take a very serious issue (cutting) and treat is as though it were a verb like “jumping” or “smiling.” Now, while some of you may not see this as an issue, I view this as a personal injustice to the hundreds of teen readers who WILL decided to purchase this book. Why? Because if a writer makes light of an issue, who’s to say that they reader won’t as well.

Anyways…before I get so high and mighty that I find it difficult to come down, here is what “Blood Wounds” is about:

Willa is lucky: She has a loving blended family that gets along. Not all families are so fortunate. But when a bloody crime takes place hundreds of miles away, it has an explosive effect on Willa’s peaceful life. The estranged father she hardly remembers has murdered his new wife and children, and is headed east toward Willa and her mother. Under police protection, Willa discovers that her mother has harbored secrets that are threatening to boil over. Has everything Willa believed about herself been a lie? But as Willa sets out to untangle the mysteries of her past, she also keeps her own secret—one that has the potential to tear apart all she holds dear.”

Ok, off to the races…

First, the writing was actually pretty good, it was the nature of the story (and how it affected the character development) that I took issue with.  Here was this girl (Willa) who in the first several chapters appeared happy and healthy.  Even though her dialogue was very obviously leading up to something tragic, the adjectives surrounding her family were of the pleasant sort, so imagine my surprise, when about 50 pages in, she all of a sudden started to rebel and (here’s the important part) blame everything on the people who had cared for her for years.  The intention (I’m certain) was to convey this overwhelming sense of disconnect and misguided guilt, but instead, Pfeffer managed to turn Willa into an insufferable, whiny, inconsiderate, bitch.  That’s right…I used the “B” word.

I am not insensitive, I can understand and even appreciate the complexities that loss will afford a person (especially a teenager) but in changing the way HER personality came across, it forced the rest of the family’s dynamic to morph as well, which made (almost) everyone  in the story unlovable. (It’s kinda hard to like a book when you hate everyone in it…right?)

Now, characters aside, lets talk about the plot. In short…it was odd.  We all know things like this happen, the news channels would be out of business if the world were all puppy dogs and rainbows, but the way that it all unfolded felt a little too bitter to be fiction. (Aka, Ms. Pfeffer watches a lot of CNN and this was a convenient way to vent her frustrations.)  If Pfeffer had picked 1 very solid topic (the murder angle) then maybe the read (as a whole) would have come off as slightly less arrogant, but the fact that she chose a heaping helping of social/emotional issues to hash out in 260 pages (murder, guilt, greed, abuse, neglect, cutting, phschosis…etc.) made the book feel heavy, and in the end…not worth the effort it took to swim through it.

In the end…I vote for no.  Spend your money elsewhere (maybe on her other books) and consider yourself lucky to have missed this trip down memory lane.

Happy Reading my fellow Kindle-ites and remember: If certain people of our past didn’t make it to our future, there’s probably a very good reason why. Don’t over-analyze it, just live with it.