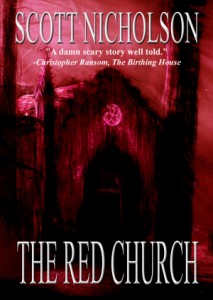 I’m going to start this blog with a disclaimer: When you are about 5% from finishing this book, park yourself next to a church, and finish it in the parking lot. Just trust me on this, I have never finished a book and then felt an immediate need for prayer and repentance as I did when I finished “The Red Church.”

Back in 1993 the world was introduced to the cult world by a fairly psychotic man named David Koresh. (For those of you reading this that were born in the late 80’s just google him.) Civilization as a whole was aware of cult society, but I think this was the turning point for recognition and condemnation.

I’ll admit… that fiery day in Waco rarely crosses my mind (I live 50 miles from there) but every once and a while something sparks that particular train of thought, and off my wild brain goes.

“The Red Church” was (in short form) a look at cult life from the inside.

Whispering Pines is a quaint little mountain town, or at least it is according to tourist.  According to its inhabitants, its a town haunted by it’s past.  Literally.  A dead preacher, an evil cult leader, and a monster with “eyes like kidneys.”  While half of the town is sucked in by Archer (Cult leader and self-proclaimed 2nd son of God) the other half (the sane half) is struggling to do little more than stay alive.  Each night a new “sinner” is turning up dead, and the police have no hard evidence to put the killer away.  What do you do when you think the killer is a ghost? What do you do when the whole town is against you? What do you do when your “GOD” asks you to sacrifice your own child.

“Nicholson” impressed me a few weeks ago with his latest novel “The Skull Ring” but I still remained skeptical of  “The Red Church” for 2 reasons.  1.  I was afraid that the writing would be lacking seeing as how THIS novel was actually an earlier work (you know… the whole growth with time and experience thing) and 2.  After a few chapters I was afraid the book was going to turn into a sermon instead of the monster thriller I expected.  I was…as usual…wrong on both accounts, and I’m actually quite happy to admit to being so.  “Nicholson’s” writing was not only fluid and amazingly imaginative, but for some reason I think it was actually better than in “The Skull Ring.” The narration was multi-perspective which is not only difficult to write but sometimes (not in this case) difficult to read.  The multitude of perspectives combined with the flawless character development made the book an easy read, and to top off the pot, his expected (at least by me) glimpse into a mentally unbalanced mind was perfectly executed.

This was a horror book that spouted details with the best of them.

There was immaculate conception, a mysterious half eaten man in a graveyard, a suicidal priest, creepy ambient laughter, finger filled puke, a wacko mommy, little boys with worms in their mouth, a REALLY smelly offering plate (that actually made me a little queasy), and 1 very epic “Come To God” moment in the front of the church.

This book is (of course) not for everyone, if you are looking for mushy make a direct left and choose a different isle, but if you are a fan of horror…saddle up.  This one is a must read.

Happy reading my fellow followers and remember: always carry an emergency kit in your car… you never know when you are going to end up in the bottom lake and need to bust a window.