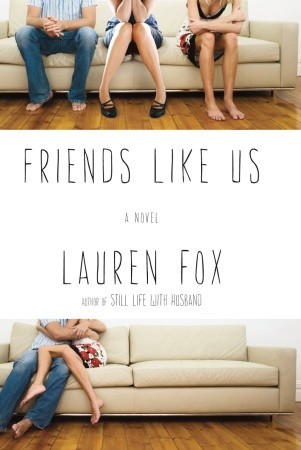 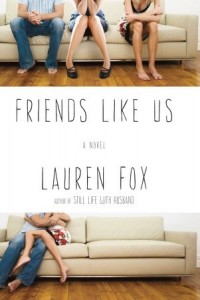 Sooo… it’s been a while since I’ve read chick-lit, mostly because I hate it, (ok hate it is a bit of a stretch, lets just say I wish it intense bodily harm.) but more, because I just can’t bring myself to accept if for review. Now, just so we are clear… I’m not talking about romances or (more common these days) a romp in the hay. Noooo… I am talking about the, “Oh woe is me, my life really sucks so I’m going to sit her and whine about it for 260 pages before I finally figure out that living in a 5 bedroom house with my perfect husband and my 2.5 children isn’t so heinous after all. Hey let’s throw a party!” Chick-lit.  (I know you know what I’m talking about.)  Anyways… I decided to take on the chore (yes chore) of “Friends Like Us” by Lauren Fox because it boasted humor. (“Fox neatly balances the comic and the serious…” – Margaret Quamme, Columbus Dispatch)  Lots and lots of humor.  Which, I kind of need right now.  Unfortunately, there is no amount of puns (“It looks like you’re playing pinball with your eyes. Like you’re playing eyeball!”) or witty dialogue exchanges (“”Did I not mention that I’ve been married and divorced three times?” “You did not.” I say. “Yes! And I have, um, twins.  Four-year-old twin, uh…boys.” “Really!” “Yes, and from different mothers!”) that could make up for the disastrous last 3 pages of this book. (*glares at evil evil book!*)

But first… a word from Fox’s sponsor:

“For Willa Jacobs, seeing her best friend, Jane Weston, is like looking in a mirror on a really good day. Strangers assume they are sisters, a comparison Willa secretly enjoys. They share an apartment, clothing, and groceries, eking out rent with part-time jobs. Willa writes advertising copy, dreaming up inspirational messages for tea bags (“The path to enlightenment is steep” and “Oolong! Farewell!”), while Jane cleans houses and writes poetry about it, rhyming “dust” with “lust,” and “clog of hair” with “fog of despair.” Together Willa and Jane are a fortress of private jokes and shared opinions, with a friendship so close there’s hardly room for anyone else. But when Ben, Willa’s oldest friend, reappears and falls in love with Jane, Willa wonders: Can she let her two best friends find happiness with each other if it means leaving her behind?”

Alright…alright, I will admit that I was (unconsciously I assure you) drawn in by the prologue of this novel (there is a bit of a battle royal staged at a bank) and… against ALL of my better judgement I just HAD TO KNOW what in Hemingway’s holy name happened, so I read on. But it wasn’t all that far into the read (though it’s a quick one) that I realized that I had committed to something less than spectacular.

Like I said above, as with every other chick-lit I have read (I beg of you…someone please prove me wrong) the beginning of the novel was the best part, but around the 60 page mark or so.. I started to find Fox’s sarcastic slams and pun-tastic play on words down right annoying.

Now, before you start scolding me, because I too am ingrained with the “say sarcastic shit” button, I have nothing but respect for those who know when to shut it off, especially when it comes to writing…a somewhat serious book.  That’s not to say I didn’t chuckle like a lunatic (and perhaps take notes) in the beginning of this book, I’m just saying that a break now and then (like say…for instance: during sex scenes) would have been nice.

So, what about the characters?

Well, Willa was mildly entertaining when she wasn’t destroying herself, Jane was nice…when she wasn’t being a control freak, and Ben was… well… pathetic. No, actually, change that to gutless, (which also goes for Willa.)

And, if that wasn’t enough to warn you off of this mildly amusing, yet incredibly predictable read.  Let’s talk about the ending.

I’m talking grade-A, top of the class, “what the hell….is that it?” type of ending.

In 3 words… it just stopped.  Everything was a mess, Willa was rambling about something that may or may not have been construed as meaningful and the next thing I know, *POOF* it’s over.  Which left me a little annoyed that I had even read the book in the first place.

All in all… not that awesome, unless you need material for a girl on girl smack-down.

Don’t waste your money people, spend it on something you won’t want to drive a wooden stake through.

Happy Reading my fellow Kindle-ites and remember: Fool me once, shame on me.  Fool me 26 times… I deserve to be punished.

One thought on “Oy! Not Again!”