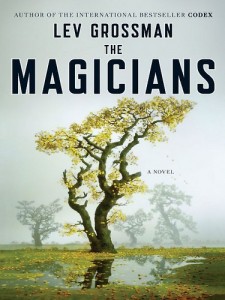 I would have liked nothing more than to jump into a full throttle review raving about “Lev Grossman’s” “The Magician’s”  but unfortunately, I just wasn’t all that impressed.

For a book that was rated “Amazon’s Best of the Month” for August, I expected more from it, a fluid plot maybe, but instead I got a novel that spent so much time dwelling on the negative that I found it hard to fully appreciate the spectacular, like “Grossman’s” ability to write a book inside of a book.

Everyone is aloud to have down days, but Quentin, the hero of this novel,  falls somewhere between masochistic and manic depressive.  Armed with “unappealing” circumstances like a looming Princeton acceptance, Quentin walks around for the first 20% of the book pining after a taken girl, obsessing about a series of books from his childhood, and whining about Brooklyn’s inability to produce any sort of change or excitement.

Lucky for him, all that changes when his college interviewer drops dead in front of him and a mysterious envelope shows up taunting him to “take a walk on the wild side”.

The special thing about Quentin, besides his already brilliant mind, is his propensity for magic.  And it’s magic that propels him into a world where only a few have ever been invited… Brakebill’s.

After entering Brakebill’s (a school for the magically gifted) Quentin finds momentary happiness, and group of friends (The Physicals) that turn out to be even more like him than he ever imagined.  They obsessed about the same things, overreact about abilities, pine for adventure, and…surprisingly, after years of self loathing and excuses they finally find it.

The group of friends is thrust into a world they thought was nothing but fiction, they are surrounded by the unknown in a land of strange creatures.  They fight with each other, they fight with nature, and more importantly they fight to save their lives.

“Grossman’s” writing was stunning, even if his attention to detail got a bit overwhelming at times.

There were walking topiaries, a trip to Antarctica, a battle with an iron robot, a man stuck in his own reverie, and a girl who pays the ultimate price just to save the boy she loves.

All in all the book was ok.  It was, however, too long, and in some parts VERY familiar.  If you have the time, read it…but be warned, this is a book that takes commitment.  It’s tedious, and ends abruptly but appropriatly.

One thought on “Princeton… What A Pity.”