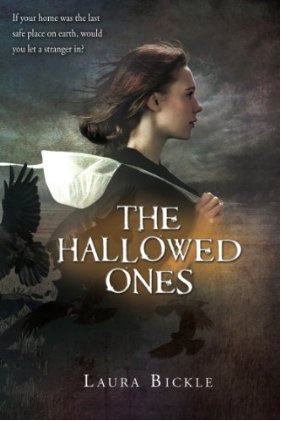 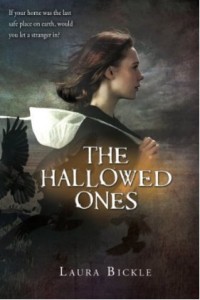 It’s not all that often that I pick up a book based solely on a single word. I read the synopsis, I lapse into a rather heated argument with my inner self about it’s possible worth and then I make a decision. This was not the case with Laura Bickle’s “The Hallowed Ones.”

The word that hooked me? AMISH.

“Katie is on the verge of her Rumspringa, the time in Amish life when teenagers can get a taste of the real world. But the real world comes to her in this dystopian tale with a philosophical bent. Rumors of massive unrest on the “Outside” abound. Something murderous is out there. Amish elders make a rule: No one goes outside, and no outsiders come in. But when Katie finds a gravely injured young man, she can’t leave him to die. She smuggles him into her family’s barn—at what cost to her community?”

I have never read anything that goes into depth about Amish life. I am a Christian I am not opposed to religious literature (whatever religion it may be) but Amish is just not something that has ever struck my fancy. My knowledge (until this book) was capped at “they make beautiful furniture.” Naive, yes…I know, but I’m from Texas and Amish isn’t a big factor down here. But being the curious cat that I am, I decided I needed to learn. So I grabbed “The Hallowed Ones” and set out expecting a seemingly calm ride through the plain country with only a few hiccups of “the outside world” thrown in for drama.

Dang was I wrong.

Did I learn about the Amish?

Bickle did an absolutely amazing job of introducing mainstream audiences to a very non-mainstream way of life without sounding preachy. She explained the do’s and don’ts of an entire corner of religious society through causal external dialogue held by all of the characters involved in the story. In short, it was like having a chat with a friend. A very educational chat with friends. (As a side note: I learned a ton about Greek Mythology from this book as well…who knew?)

So where did the “creepy” come in?

Well, let me tell you, (because it shocked the socks off of me.) I am a HUGE fan of apocalyptic literature. Roughly 5 out of every 8 books I read has something to do (one way or another) with the end of the world. “The Hallowed Ones” turned out to be exactly that. A look at how faith and trust can be effected by extreme circumstances.

Katie (or Bonnet as she is referred by some in this book) is Amish and about to go on her Rumsprina (think of it as Summer vacation for the Amish, they get to leave the house and experience something brand new.) But before she has the opportunity to jet set out and experience the thrill of Wonder Woman comic books and Coca-cola without the added stigma of guilt all hell breaks loose. (Excuse the pun.) A chopper crashes on her communities land, people disappear and before she knows it she has some strange “outsider” living in her barn.

The story, though filled with eerie images of creepy crawlies that literally crawl on the ceiling (like spiders – no I won’t spoil it and tell you what they are) and moments of pure horror (when the “things” find their way onto holy land) its not really about that. It’s about Katie and how she has to choose a path. She can be blind and follow a path that has been cleared for her since birth, or she can stand up to “evil” and do what she believes is right. It’s not about religious persecution, it’s about religious freedom. Or at least it is for Katie. Freedom to choose for herself.

All of these elements combined created one heck of a story. One I hope dearly Bickle chooses to expand on in the future.

With well developed characters, and a fantastic, well paced plot, I highly recommend this novel to those who love to feel a little anxious when it’s time to turn out the lights. This is a book that will have you jumping at random sounds and praying to prove that you can.

Happy Reading my fellow Kindle-ites and remember: If the animals are scared shitless…you should be too!

One thought on “Slightly Creeped Out (ARC Review)”