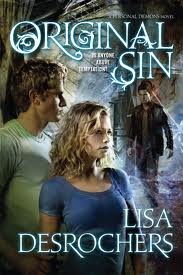 A few months ago I read Lisa Desrochers’ book “Personal Demons” and I wasn’t that impressed. Yes, it was ok, and yes it was entertaining (which I guess is actually the point of a book) but it just didn’t have that spark that makes me A. Run out and tell everyone I know to read it, or B. Add it to my “Paranormal Bucket List.” I read it, I smiled a few times and then I put it down and forgot all about it. No harm. No foul. Then…one day at the end of June I came home from work and found a package from Tor Books. “Hell Yeah!!!” was my first thought (because, of course, at my core I am a 13 year old girl) and then (just as quickly) my excitement evaporated (Cue very dramatic music) inside this beautiful white bubbly package was NOT the book I was expecting, instead it was “Original Sin” book #2 in Desrochers’ series. Being the dedicated bookworm that I am however, I buckled down and gave it a chance. Without guts there would be no glory, and if Tor was gracious enough to send me the book by damned I was going to read it!

Now, before I go any further, I want to stress a few things. First… I have (since reading Original Sin) added this book to my “Paranormal Bucket List” so if you are needing a new series to sink your teeth into, I now (unabashedly) give you my blessing. Second…In an effort to not be TOO spoilery I am going to copy the publishers product description instead of writing my own. That is not to say (however) that there WON’T be spoilers so…if you HAVEN’T read “Personal Demons” keep reading at your OWN RISK. (I swear if I get one nasty comment calling me a “book ruiner” I will punch the first bunny I find… you have been warned.)

“Luc Cain was born and raised in Hell, but he isn’t feeling as demonic as usual lately—thanks to Frannie Cavanaugh and the unique power she never realized she had. But you can’t desert Hell without consequences, and suddenly Frannie and Luc find themselves targeted by the same demons who used to be Luc’s allies. Left with few options, Frannie and Luc accept the protection of Heaven and one of its most powerful angels, Gabe. Unfortunately, Luc isn’t the only one affected by Frannie, and it isn’t long before Gabe realizes that being around her is too…tempting. Rather than risk losing his wings, he leaves Frannie and Luc under the protection of her recently-acquired guardian angel. Which would be fine, but Gabe is barely out the door before an assortment of demons appears—and they’re not leaving without dragging Luc back to Hell with them. Hell won’t give up and Heaven won’t give in. Frannie’s guardian exercises all the power he has to keep them away, but the demons are willing to hurt anyone close to Frannie in order to get what they want. It will take everything she has and then some to stay out of Hell’s grasp. And not everyone will get out of it alive.”

Ok, semantics out of the way, lets get down to business.

Unlike in the first book, “Original Sin” had depth. As with many “firsts” in a series the author is trying to establish the characters. There is (of course) a plot but at moments it will disappear while the author takes a moment to present a flashback or a few pages of internal dialogue (meant to inform the reader of the characters personality) All of these are necessary, but like I said before can draw attention away from the “action.” In OS this was NOT the case. As a matter of fact OS was completely plot driven and (ultimately) action packed from page 1. There were a few new characters, (again…natural for a series) but unlike in “Personal Demons” their background was built-in to whichever predicament the heroes/heroines found themselves immersed.

Another, VERY IMPORTANT aspect of this book (vs. PD) was Desrochers’ ability to write pain. As a person who thrives on being tethered to the worlds I am reading about, I find it difficult to rave about a book that I didn’t feel emotionally attached to (whether it be through humor or hurt.) If the writing is unconvincing in its genuineness it will fall flat and no matter how hard you try you will (more often than not) miss the entire point of the book. OS was the poster child for “emotional rollercoaster” and in being so made me feel like I was reading about someone, (whose life) I cared about versus just a bunch of words on a page.

Were there flaws in “Original Sin” of course, no book is perfect…Matt (the brother) tended to repeat himself more than necessary, Luc’s angst got a little wild in points, and Frannie’s (somewhat sporatic) whining made me want to stick duct-tape over her mouth, but none of these were enough to make me throw the book across the room, or roll my eyes, (which translates into: guess it wasn’t that bad.)

All in all… a FANTASTIC second book in a series I felt was doomed to a bad shelf-life.

This one is a para-junkies dream folks!

Happy Reading my fellow Kindle-ites and remember: It’s not just big brothers that are a total pain in the ass.. the little ones have their own share of problems.

One thought on “Something’s Fishy Next Door”