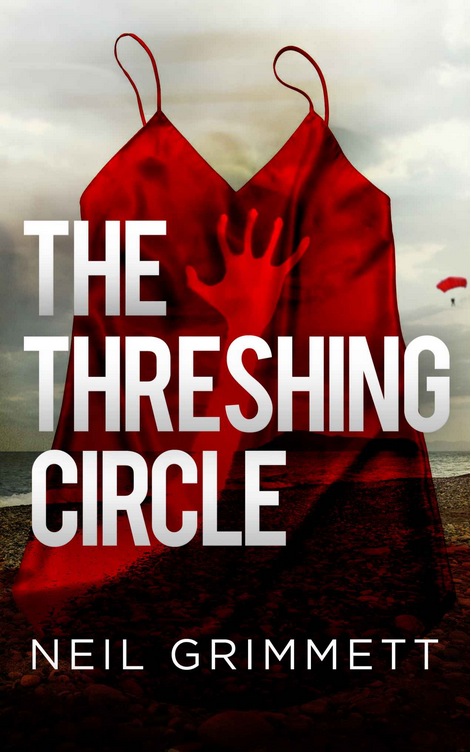 Then…I went to sleep WITHOUT having written any of it down.

The next morning I was furious with myself for being so absent minded and (after a ten minute internal scolding and roughly 4 cups of really black coffee) I decided avoidance (versus actually writing the review) was a much better use of my time. (Sorry Neil.)

Truth be told, I was no longer convinced my opening paragraph would do justice to either my book OR my thoughts, and they needed to be reevaluated. Today, I finally realized what “The Threshing Circle” and all of you deserved. Straight forwardness. The one thing that had me cringing while making my way through this revenge (if it can even be called that) thriller was the total chaos that made up the first several chapters. And I can’t help but think “maybe if Neil had slept on it” the execution would have matched his intent. But I digress, let’s first learn what the book is about, and then I’ll move on to all the ups and downs I encountered while reading it.

A young couple arrive on the Greek island of Crete and begin prying into the execution of a beautiful English woman during the German occupation sixty years before. They enter a labyrinth of forbidden love, betrayals, murder, greed and vendettas, old and new.

A feisty Scottish woman and an irascible, Zorba-like Greek form a reluctant allegiance in a desperate attempt to find and rescue them. They both have very different motives for their involvement. Their search will take them to hidden rituals, ceremonies, remote gatherings, famous monasteries and villages abandoned after decades of vendettas. To the remote island of Gavdos and finally back to a place that, “Even God does not know exists”.

They will encounter characters good and evil; some modern and pragmatic, others ancient and magical.

All the time they are being stalked by the sons of man who seeks to complete the crimes of his father and sate his own greed and insane desire for vengeance. These men are more animal than human and have been raised in the remote mountains for the sole purpose of carrying out the brutal will of their father.

There were a lot of really good things about this book. The “inside” look at Greek culture. The dedication to family, history, promises. Even the characters once you got 20% in, but up until that point (with the exception of the prologue which did an excellent job of instilling intrigue in the reader.) “The Threshing Circle” was a bit of a hot mess.

Let me break it down a little further and explain exactly where it all went wrong and then maybe it’ll help you determine whether or not you can muck through the mud to get to the gold.

The Threshing Circle is written from several different points of view. Marianna (the young English woman who captivates the prologue to establish mystery and deceit.) Kirsty  (a cafe owner who befriends the young couple mentioned in the synopsis.) Barba Yiorgos (who is connected to the entire Greek community as well as the young couple.) And the evil-doers (that will remain nameless in hopes of not spoiling the novel.) ALL of these characters except one are cleanly plotted and established. In other words…I had no problem following what was going on with them, their internal dialogue or intent for the entirety of the novel. Yiorgos on the other hand read as more of an abstract thought that an actual person. The whole point of Yiorgos in the beginning of the novel is to establish a precedence for everything to follow, unfortunately all he manages to do is confuse things. I found myself on SEVERAL occasions putting the book down out of pure frustration.

What was his obsession with honor? Why the hell was he shooting a gun into an ocean after seeing two random people in a cafe? Why was he talking about blood, and nemesis at 7% in with ZERO explanation or background. The whole thing felt off. Now, admittedly…all of it makes sense by the time you reach the END of the novel, but the lack of any clues or explanation of any sort (even when it came to the variation of names he had) was almost more trouble than it was worth.

So what made me keep reading if I was so frustrated? (And believe me…I felt like an idiot for almost letting my frustration get the best of me.) Yiorgos’s father.

There is a point in the story where all of the half sentences, ramblings and madness start to form one cohesive story and that is when Yiorgos reads a letter (pretty much explaining everything) from his father. From this point on the story morphs into an adventure. (despite it being a slightly psychotic one.) Kirsty’s friends are missing and Yiorgos vows (though for his own reasons, not Kirsty’s) to help locate them.

Yiorgos (after this point) is no longer abstract but fleshed out, and the world around him (and Kirsty) becomes suddenly vivid with impressively crafted descriptive passages.

“It appeared to Michaelis and Andonis, as if some catastrophe had occurred without leaving the usual visible scars of its passing. No lava-encased corpses or layers of ash; no earthquake rubble with buildings torn apart by the belly-laugh of the gods of the underworld. Or even the modern, manmade version with bullet holes, burnt-out homes and the evidence of fresh-turned earth cover mass graves. There were houses leading up from the track, melding and clinging precipitously to the mountains; other were on the flat ground, in row of three and four, or detached. They ranged from small single0-story buildings, to large wealthy-looking properties, that might once have been merchants’ houses or country retreats. Some were beginning to crumble; others appeared more recently restored.”

The story also grows darker and harsher, which managed to draw me to the edge of my seat in anticipation. (Not really sure what that says about me.) The “evil-doers” leap off the page in disgusting technicolor. The lies told by every character harsher yet more believable. And ALL of it (the fighting, the letters, the past) comes to a head in one very dramatic scene in which you are lead to believe may or may not have happened for the right reasons. (In short, the story keeps going after the mystery has been solved.)

Of course, by the VERY end of the novel (which I have to say kind of shocked me) everything is solved. Put in it’s proper place and wrapped up snug as a bug in a rug. THIS made me VERY happy. (Because I am sick of reading series.) Which now brings us to the ultimate question now doesn’t it?

Should you read it?

There is a specific audience for this book, and I hate to say it…but it’s a pretty small one. It will not appeal to “light” readers, and those that enjoy “generic” mystery. It is both cruel and intricate. (Which I’m not saying is a bad thing, just noting for factual reference.) Chances are…it’ll find a happy home in the arms of psychological thriller fans.(And that is ALL.) If this is YOU, knock your lights out. If it’s not….take a pass. You won’t be happy with it, and I’d rather not wake up to 20 angry emails tomorrow morning. Think about who you are, and proceed accordingly.

Happy Reading my fellow Kindle-ites and remember: “While seeking revenge, dig two graves – one for yourself.” – Douglas Horton