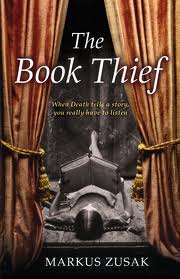 When I was in high-school I hated being told what to read. I thought (naively of course) that it was enough that we were actually reading; to turn around and then dictate our reading “material” was unnecessary and well…annoying as all hell. So…my teenage anarchist self chose not to do it. Flat out…I was not, under any circumstance, going to fold under the pressure of a heavy eyed glare, from a grossly annoyed Lit teacher, and read some lame as story about some lame ass farm. Nope, I was too good for that. Instead, while my class was busy dissecting the interworking of ostracism in books like “The Scarlet Letter” I took up residence in the back of the room with an entirely different plan…I would read what I wanted, when I wanted to read it. Take that Earnest Hemmingway!

Last weekend however, I finally understood the meaning of required reading. (Yes, yes… I’m 30 and should have figured this out years ago, but lets face it…I’m a late bloomer.) Anyways, my point to all of this is (as long winded as it may appear to be) is that finally, after all of these years of brooding and general combativeness regarding primary school literature, I have realized that the younger we are, the more open we are to learning life lessons. Some lessons may be as simple as friendship, others may be about forgiveness or learning to let go, and then some, like “The Book Thief” (by Markus Zusak) are about nothing more than learning how to breathe.

“Set during World War II in Germany, Markus Zusak’s groundbreaking new novel is the story of Liesel Meminger, a foster girl living outside of Munich. Liesel scratches out a meager existence for herself by stealing when she encounters something she can’t resist–books. With the help of her accordion-playing foster father, she learns to read and shares her stolen books with her neighbors during bombing raids as well as with the Jewish man hidden in her basement before he is marched to Dachau. This is a story about the ability of books to feed the soul.”

I have never finished a book before and instantly thought, “God, I wish I was an Lit teacher so I could force kids to read this” but that is exactly what happened to me when I let the final (devastating) words of “The Book Thief” seep into my core. WWII is not an untouched subject in HS, but an unadulterated understanding of the pain inflicted on ALL sides is. We read “The Diary of Anne Frank,” or “Ghost Soldiers.” We study the cruelty of the Nazi party and concentration camps, but what we don’t study is the effects this particular war had on every day, run of the mill German society. We (as students) are not taught that members of Hitler’s “superior race” were also forced to live a poverished life. That baths for children were rare and food was hard to come by. We were not taught that neighbors bred unnatural amounts of hate towards each other for no other reason than coffee or cigarette rations, or that children as young as 10 were forced into finishing camps, made to run for hours in freezing temperatures all in a thinly veiled hope that one day they would become a better collection of SS soldiers. No, we were only taught to understand and appreciate the side of the sympathizer, the Jews, the poor souls that had their lives dramatically changed, or more importantly ended for no other reason than to stroke a insecure man’s ego. So imagine my surprise, that at the age of 30 I was finally offered a glimpse into the other side of a crumbling existence.

Now, I could go on for hours about the complexities of this book. The plot, the characters, the way in which the story weaves in and out of itself like a perfectly pieced together quilt, but my adoration for this mesmerizingly beautiful piece of literature will never find justification through the words on a blog. I cannot write “aching” I can only describe it, and as I sat there last week, reading the words that caused even death himself to shed tears, I suddenly understood that none of these “things” (that we go on and on about when talking about books) mattered. What mattered is that I knew (without a doubt) that I would never look at a war (I was so well acquainted with) the same again. Instead, I would look at it through the eyes of a little German girl, who stole books to give the impression of peace during a time that was anything by peaceful.

I stand before you a humbled woman and encourage each of you to open your mind, so we can learn from our past mistakes instead of dooming ourselves to repeat them.

Happy reading my fellow Kindle-ites and remember: there is nothing more beautiful than a full heart.