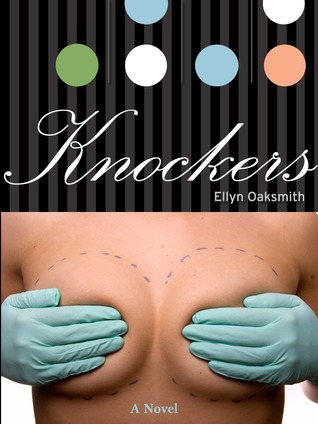 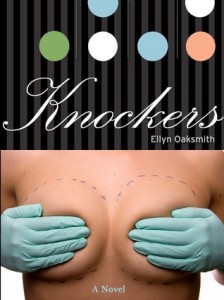 Afternoon Kindle-ites! Well, today I decided to take a break from the whole “I can’t remember my name” theme I’ve had going on and instead focus on boobs. That’s right…the ones you see directly to the left, the ones you are staring at instead of actually reading what I’m writing. *waves* Hi! Yes..ok, now that I’ve got your attention, let’s talk about “Knockers” by Ellyn Oaksmith.

“Knockers is about a young woman, Molly, who, through a surgical error receives unwanted breast implants. Furious, she schedules surgery to have them removed, only to find out that the implants begin talking to her. The implants, Max and Louise, give her great advice about her burgeoning love life although they rarely agree and are both highly opinionated and belligerent.  Through Max and Louise, Molly learns to trust her own instincts and falls for the most unlikely of men. “

That’s right ladies and gentleman….Talking Boobs!!! Now, before you get all high and mighty on me and think I’ve completly lost my marbles for loving this book, let me explain to you why it was so freaking brilliant that I stayed up until 3am reading (and pointing and laughing) at it.

Who here has seen the movie “What’s Your Number?” (which is actually based on the book “20 Times a Lady” by Karyn Boznak…just FYI) If you have, you know the beauty of well placed humor. The chances of 2 relatively hot people shedding their skivvies and jumping into the Hudson River at midnight are slim to none, (no one wants to chance bacteria in the lady bits) but “reality” isn’t what matters in these scenarios…it’s the feeling the “made-up” experience provides you.  Oaksmith adapted the same concept (delusional reality) and created an entire world around it.

Here is the thing, Molly (the lead) has some seriously deep-seeded issues, that (like most women) she keeps stuffed in her denial drawer.  It’s not until a pretty funny (ok, maybe not so funny for her) accident at the plastic surgeon’s office, that these issues come to life.  Literally. In the form of 2 talking breast implants.

I’ll admit, at first I was a little concerned that this book had jumped the shark, but the more I read the more it made sense.  Molly needed help, and what better way to give it to her than to make her a tad insane.  Her boobs (Max and Louise) added an outlet for Oaksmith to express Molly’s inner anxiety without wasting valuable space on monologues, and in taking the risk of the unconventional…she was able to create two very interesting and often funny characters without having to give them a past or even a future.

Like every good romantic comedy there are gobs of misunderstandings, lots of clumsiness and huge bouts of uneasiness,  but lets be honest…those are the characteristics that drive stories like these, and as if that wasn’t enough, they characters were damn near perfect, in a very “we-are-a-screwed-up-bunch-wackos” way.

The only problem I had with this book, (and I’ve actually ganked an entire star away from it’s rating because of it) is the horrible editing.  While the plot is fantastic, there are parts were I had to stop and re-read a sentence to understand what was trying to be said.  For example:

“Instead I forced myself to I call Dr. Hupta’s office from the kitchen.”

These are easy to bump over, but that doesn’t mean they shouldn’t be fixed.  Immediately.

Despite the oopsies… it was a hilarious book that anyone in need of a good belly laugh would be wise to read.  I’m certainly glad that I did.

Happy Reading my fellow Kindle-ites and remember: always bring a STABLE friend with you to the hospital…

2 thoughts on “There’s A British Dude WHERE?”