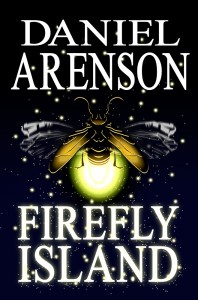 “Firefly Island” is going to be exasperatingly difficult to review, not because I disliked the novel, but because this was a fantasy novel that had so many twists and turns that it is almost impossible to sum it up with a simple “this was good.”

We all know that I love fantasy novels, there is something so fantastic and epic about them that its like having a really cool pop-up book inside of your head. They are about journeys and soul searching, conquering evil and finding ones self, they are about ogres and warriors and the kings that lead them. They are about seeing what nobody else sees… and in this particular case it was about what “Daniel Arenson” saw.

Firefly Island is on the brink of civil war and there is only one girl that can stop it, unfortunately she was sold as a slave to an ogre when she was a small child. Knowing that nothing short of a miracle is going to set her free Aeolia jumps for joy when a mysterious, man dressed in battle gear, (and claiming to be her brothers best friend) comes to take her away. It’s just to bad that her knight in shining armor turns out to be evil incarnate. After discovering that things in the outside world aren’t quite so peachy, Aeolia and her band of very gifted friends take matters into their own hands, wielding swords and magical gifts, determined to topple an evil king and change the future of the 5 races.

“Arenson” wrote fantasy in every aspect of the word. He had pages of flourishing details, new lands that were described right down to the color of the leaves, and clans of people that were engaging and unique. The plot was smooth (even throughout the flashback sequences) and unbelievably complex. (several stories, 1 defining plot) The biggest complaint I have (naturally) was with the character development. The majority of the main characters were described flawlessly (emotional thought, appearance, reaction) but there were a few characters that (to me) seemed more like afterthoughts. There were also a few places (in the action scenes) that seemed to stop a tad abruptly, and to be honest the last couple of paragraphs were just kind of BLAH… but up until that point it was an action filled, fun ride.

There were shape shifting girls, chameleon boys, and angry prince with a wicked scar, the most dangerous arrows ever created, roughly 200 battles (ha), and 1 very pissed off girl with a torch.

If you are a fan of books like “Lord of The Rings” and “The Chronicles of Narnia” you will LOVE this book. For the rest of you… you will probably be entertained but won’t be running in the streets screaming it’s praises.

Figure out who you are… and run with it.

Happy reading my fellow Forestfolk and remember: Hiding in a tunnel only works for terrorist and crazy poets, and I’m pretty sure you are neither.