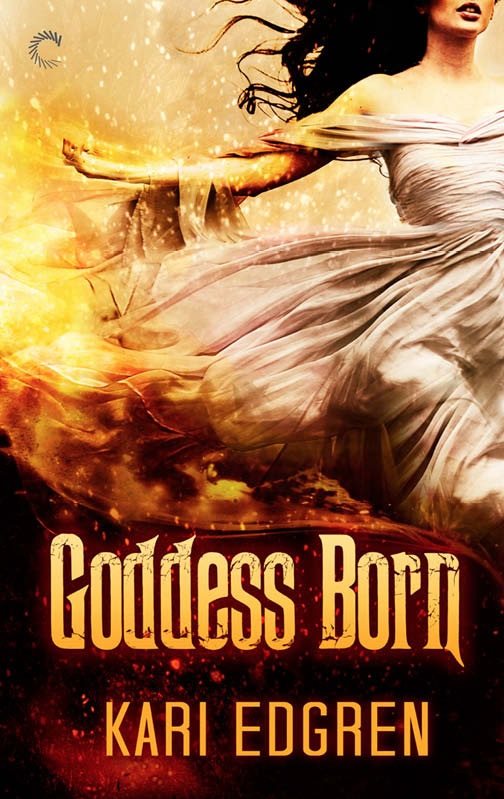 Did you know that before 1750 witch-hunting was legally sanctioned? True story. Though the hunt tended to cause mass hysteria, it was deemed “A-ok!” in the eyes of law-enforcement as long as a witchcraft trail took place before any sort of sentence was passed down. As a result an estimated 40-60,000 executions were performed in Europe and North America between 1480 and 1750. A startling number. (Even when the worlds current population hovers somewhere around the 7.2 billion mark.)

Now, keeping that in mind, Kari Edgren’s novel “Goddess Born” (if written as non-fiction, obviously) would be the perfect example of what happens when the “inability to understand something” shakes hands with “religious fanaticism.” (AKA: total chaos.) And despite its home being built on a gothic paranormal frame, (the protagonist IS the offspring of a deity after all) it’s ability to stand firm in it’s depiction of the era was impressive. Arranged marriages, unforeseen illness, Indians,…witch-hunts, they were all present and accounted for. They also combined to make a fairly interesting story that I feel obliged to label as: Historical Romance – With A Kick.

Selah Kilbrid keeps a dangerous secret: she has the power to heal.

A direct descendent of the Celtic goddess Brigid, it’s Selah’s sacred duty to help those in need. But as the last of the Goddess Born living in the New World, she learned from an early age to keep her supernatural abilities hidden. The Quaker community of Hopewell has always been welcoming, but there’s no doubt they would see her hanged if her gift was revealed.

When a prominent minister threatens to try her with witchcraft unless she becomes his wife, Selah has only one hope—that her betrothed, a distant cousin from Ireland, arrives as planned. Marrying Samuel would keep her secret safe, preserve her sacred bloodline, and protect her from being charged as a witch.

But when news of Samuel’s death reaches the Colonies, Selah is truly on her own. Terrified, she faces an impossible choice—forfeit her powers and marry the loathsome Nathan? Or find an impostor to pose as her husband and preserve her birthright?

Now, I know what you are thinking…

“Misty, WTF are you rambling on and on about? With the exception of the word witchcraft being thrown in their once or twice, the synopsis sounds predominantly supernatural.”

To which I say…you are right. It does. But that’s NOT how the book reads. As a matter of fact, the “goddess” aspect of the story is almost secondary to, well, everything else.

Yes, she has a supernatural ability to heal people. This simple fact is thrown in the readers face right out of the gate in regards to both her father and her betrothed. And yes, her powers are used again and again when people around her are dropping like flies. (Wow, that sounded very dis-compassionate. Hmmm, is that a word? Oh well.) BUT, the discussion of WHO she is, WHY she has these powers, WHAT the pros and cons of possessing this particular power encompass are almost an afterthought. Skimmed over and thrown in for continuity purposes. Is this a bad thing? Not necessarily.

As a whole I was so drawn in by the other aspects of the story that I could have cared less about the background of Brigid the Celtic goddess. Healing was just a part of Selah’s existence. It didn’t define her, just made her more…complete? (Yeah, I can’t think of a better word than that.)

The gusto of “Goddess Born” lay in the relationships surrounding Selah and how they contributed to both her romantic endeavors as well as her ability to survive being hunted for her differences.  Take Samuel for example. He is dead before he is even introduced as a character, but his death spawns the ENTIRE web of treachery, deceit, and love that make up the story behind GB. Without his death there would be no need to lie for freedom. Nathan would have no ground to stand on. Would there even BE a witch-trial? Or an angry merchant set on revenge? Probably not. There would be no “love-match” because Selah would have been trapped in an arranged marriage. Speaking of her “love-match” (who will remain nameless because I don’t want to spoil the story) it is spine-tingling. From forced kisses, to imprisonment, each and every move and countermove made by the couple make up one hell of a bewitching (no-pun intended) romance.

Nathan, the Quaker Elders, even a random magistrate…they all play interracial parts. Each character has a purpose, and each purposes in peeled back one layer at a time exposing (in the end) a rather shocking “who-dun-it” mystery.

So yes, this is a story about a woman with extraordinary powers, but that’s not all. It’s a story about how far people are willing to go when they feel threatened, alone, rejected. How perception can change with one simple suggestion. How faith in people is sometimes necessary to survival. AND…it’s about how love IS a battlefield.

If you are a fan of paranormal fiction, historical romance, or… say…books like Outlander, chances are you’ll enjoy this.

Happy Reading my fellow Kindle-ites and remember: Not understanding something doesn’t make it evil.

NOTE: This is labeled as an NA book (which usually means expect mature content) but this book is VERY CLEAN. So if graphic sexual encounters isn’t your thing (but longing looks and propriety are) this is the book for you!