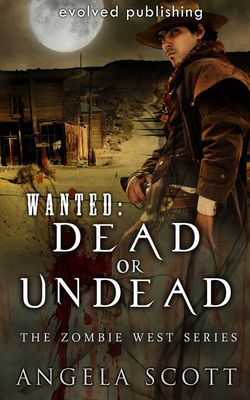 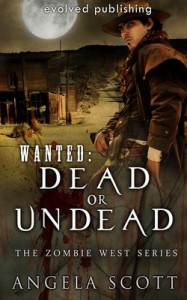 Dear Lord, When the world finally comes to an end…let it be with zombie! Sincerely – Me

For those of you that have been following for a while, chances are you know almost everything there is to know about me. 1.  I love gummy bears.  I think they should be considered a food group and be a required daily dietary need.  2.  I have a very hard time keeping my feet still.  It’s a curse, the more I think the more they wiggle and at some point I might actually take flight.  3.  I love zombies!

Now, while number 3 might not shock you all that much, this might. I LOOOOOVE westerns. “WHAT?!” You say. Yep! Though I rarely talk about them and (to date) I don’t think I’ve reviewed a single damn one, I love them!  So when Angela Scott emailed me last week and asked if I’d like to give her new Western Zombie book a shot (get it…shot. ha!) I replied with a “Hell Yeah! Send Immediately!!”

I know what you are thinking. “Zombies and Cowboys? That’s almost as bad as Cowboys and Aliens!”

First off… Cowboys and Aliens rocks, so back up off it! Second, yes…Zombies and Cowboys baby! Read it and weep people as you are thrown head first into a wildly entertaining mix of “The Walking Dead” meets “Hell on Wheels.” (<–now that is a spicy meatball!)

“Trace Monroe doesn’t believe in luck. He never has. But when a fiery-headed cowgirl saunters through the saloon doors, wielding shotguns and a know-how for killing the living dead, he believes he just may be the luckiest man alive.

Trace wants to join Red’s posse, but she prefers to work alone—less messy that way. In order to become her traveling companion, Trace has to agree to her terms: no names, no questions, and if he gets bit, he can’t beg for mercy when she severs his brain stem.

He agrees, knowing only that Red is the sharpest shooter he’s ever encountered. The fact she’s stunning hasn’t escaped his attention either.

What he doesn’t know, is that Red has a very good reason to be on top of her game. She not only has the answer for how they can all outlive the plague taking over the wild, wild west, she IS the answer.”

Before you get all hoity toity with me and demand that this book sounds more like a love story than a round ’em up, shoot ’em down western, it’s both.  As a matter of fact…despite it somewhat flowery synopsis, (“The fact she’s stunning hasn’t escaped his attention”) it’s actually kind of gross. (In a totally awesome zombie way.)

Don’t believe me? Ok…I’ll prove it.

“At first he didn’t see her.  The headless bodies littered the ground like a forest of hewn down trees. Mounds of zombie corpses were splayed in various directions with broken, mangled limbs.  Decapitated heads stared upward with wide, milky eyes and jaws that hung from broken pivots in an eternal, silent moan.  Thick, soupy blood poured from the necks of the severed bodies, merging into one giant lake of blackened red.”

The fantastically gruesome descriptions are not what drives this book though, (although man are they fabulous) the mystery behind Red does.  It’s not all that hard to peg Red’s personality, she is stubborn and very independent, but regardless of the picture Scott painted (with her deep and captivating character development,) it’s what she DOESN’T tell you that will keep your fingers aching to turn the page.  There is something wrong with Red, and as much as we love her…I have a feeling by the time the series is all said and done, we are going to find ourselves on the other side of that fence.

What about the plot? Well…it’s zombies for Christ sake so 85% of it is going to be focused on getting away from or killing them, (helloooo machete!) but there is a sub-plot, (a swoon worthy, hell bent on revenge, holy shit that is my brother) sub plot that is going to get very complicated in the next few books. (Several characters were introduced but not explained – think backgrounds.) And as much as I don’t want to tell you this (cause it’s kind of a spoiler) the book ends with the Zombies still having the upper hand. *rubs palms together in anticipation*

So…was it worth all of the excitement that I had going into it? I’m going to go with yes.  It was well written, well plotted and VERY entertaining (even the lovey dovey aspects of it!) If you like a good shoot out, and zombies trying to eat your brains for brunch, pick it up…you won’t be sorry.

2 thoughts on “You Gotta Know When To Hold ‘Em”