For all of the younger paranormal fans out there… here is a spell book for the little ones.  Happy Tuesday and remember: Reading is contagious… pass it on! 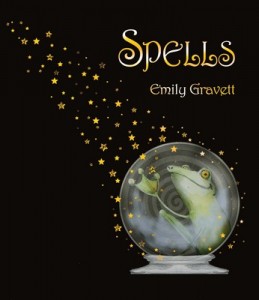 Starred Review. Kindergarten-Grade 4—As in Wolves (2005) and Little Mouse’s Big Book of Fears (2007, both S & S), Gravett continues her playful focus on the book as physical object. Here a small green frog transforms an old book of spells into a pirate ship, its torn pages serving as sail, flag, telescope, and water. As the amphibian cavorts through ripped-up incantations, he finds a scrap that reads: “Spell to Become a Handsome Prince.” On the ensuing spreads, the frog’s attempts to line up the proper magic words and phrases are depicted on the verso, while on the recto, split pages lead to increasingly hilarious results. Thus, the jumbled spell may read, “Into the cauldron these words cast Hoppity, Fluffity, Carrotozabbit. Stir three times and out spells…R/ABBIT” (or “R/AKE” if one turns only the lower portion, revealing the snake’s posterior, now supporting the head of a rabbit). The initial letter or blend resides in the top half-page; the remaining letters are on the bottom. The spells reconfigure, too. The controlled palette is comprised of parchmentlike cream, pale green, and yellow, and occasional glittery stardust. While the frog’s wish does come true, it is undone when he fails to read the fine print—a condition clarified only on the endpapers. This tour de force of design and detail is guaranteed to delight all ages, especially those just learning how to…spell.—Wendy Lukehart, Washington DC Public Library END

Learning Lessons 1 Book At A Time

Give Your Child A Free Book!

Children’s Time – Down The Mysterly River