It’s that time again!!! Here is one for the little ones in your life.  Don’t forget, reading is contagious…pass it on. 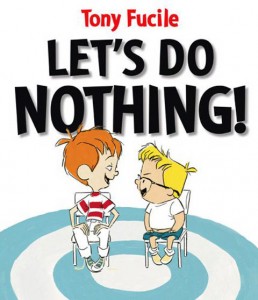 Starred Review. PreSchool-Grade 1–Fucile makes a hilarious debut with this picture book. After playing all kinds of games, reading comic books, and baking enough cookies to feed a small country, two boys agree to do nothing for 10 seconds. When Sal, the older child, tells Frankie that they are going to sit in chairs and pretend to be statues in the park, the younger boy’s imagination runs wild and ruins the moment. He envisions a flock of pigeons clustering about his stony self and shoos them away. This only frustrates Sal, who tries again and again to think of ways for the two of them to remain absolutely still. Frankie is unable to get this right, always imagining something that causes him to move, from a small dog relieving himself on the boy’s giant redwood self or King Kong climbing his Empire State Building self and stealing his eyeglasses. In the end, when Frankie can no longer hold his breath or keep from blinking, Sal gives up. Relieved, Frankie has a suggestion. The story is told mainly through the zany artwork. Clear, cartoonlike illustrations alternate between generous spreads and vignettes set on white backgrounds. Done in ink, colored pencil, and acrylic, the pictures capture the universality of the moment through the boys’ animated body language, Sal’s imperious glances, and Frankie’s increasing exasperation.–Adrienne Wilson, Edith Wheeler Memorial Library, Monroe, CT
Copyright © Reed Business Information, a division of Reed Elsevier Inc. All rights reserved.

Don’t move! A master of animation explores the elusive art of doing nothing in this comical tale of two very active imaginations.

Frankie and Sal have already played every sport and board game invented, baked and eaten batches of cookies, and painted a zillion pictures. What’s left to do? Nothing! Ten seconds of nothing! Can they do it? Can they act like stone statues in the park? Can they simply hold their breath and not blink an eye? With a wink to the reader and a command of visual humor, feature film animator Tony Fucile demonstrates the Zen-like art of doing nothing…oops! Couldn’t do it!

Learning Lessons 1 Book At A Time

Give Your Child A Free Book!

Children’s Time – Down The Mysterly River

One thought on “Tiny Tot Tuesday!”