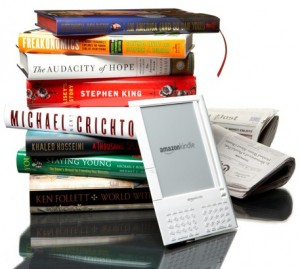 SAN FRANCISCO — It’s a formidable high-tech face-off: Amazon.com versus Apple for the hearts and minds of book publishers, authors and readers.

Amazon’s Kindle devices and electronic bookstore now dominate a nascent but booming market, accounting for more than 70 percent of electronic reader sales and 80 percent of e-book purchases, according to some analysts. And on Thursday it will take a page from Apple and announce that it is opening up the Kindle to outside software developers.

Apple’s much-anticipated tablet computer, which is widely expected to be announced next Wednesday and go on sale this spring, will be a far more versatile (and expensive) device that will offer access to books, newspapers and other reading material through Apple’s popular App Store on iTunes.

Book publishers, who rail against the dominance of Amazon and its insistence on discounting new releases to $9.99, are now playing the tech titans against each other.

In the process, they may be rushing from the clutches of one tenacious chief executive, Jeffrey P. Bezos, into the arms of another, Steven P. Jobs, whose obstinacy over pricing has given the music industry similar paroxysms of anxiety.

“Will Kindle pricing trump Apple sex appeal? Isn’t that the question, really?” said Richard Charkin, executive director of Bloomsbury Publishing in London, who has been watching developments in e-book sales with keen interest. “I haven’t the faintest idea. All I would say is, great. The more people that are out there marketing books in digital or any other format, the better.”

There are now almost daily tactical moves by various parties in the business, with no end in sight.

In its announcement Thursday, Amazon will say that it is letting programmers create what it calls active content — similar to applications — for the Kindle and keep 70 percent of the revenue from each sale after paying for wireless delivery costs.

Amazon will release a set of programming guidelines that other companies — including publishers of books and periodicals — can use to create and sell applications for the Kindle.

Until Amazon introduces more advanced models of the Kindle, developers will be limited by its slow-to-refresh black-and-white screen.

Ian Freed, vice president for the Kindle at Amazon, said he expected developers would devise a wide range of programs, including utilities like calculators, stock tickers and casual video games. He also predicts publishers will begin selling a new breed of e-books, like searchable travel books and restaurant guides that can be tailored to the Kindle owner’s location; textbooks with interactive quizzes; and novels that combine text and audio.

“We knew from the earliest days of the Kindle that invention was not all going to take place within the walls of Amazon,” Mr. Freed said. “We wanted to open this up to a wide range of creative people, from developers to publishers to authors, to build whatever they like.”

The move may also represent a shift in Amazon’s relationship with newspapers and magazines that make digital editions for the Kindle. Many executives at those organizations have expressed dissatisfaction with their 30 percent cut of subscription fees on the Kindle and lack of a direct relationship with those subscribers.

With a Kindle app store, those media companies will be able to sell more profitable Kindle applications, and present news that is updated throughout the day.

Amazon may be rushing to change the rules of its Kindle platform with an eye toward the fanfare that will no doubt greet Apple’s long-awaited tablet. The devices, to be sure, are fundamentally different: Amazon has positioned the Kindle as the ultimate reading device, easy on the eyes and slow to deplete its battery. Analysts say that to buyers of an Apple tablet, playing video or video games may be more important than reading.

But for book publishers, Apple’s introduction provides a potentially golden opportunity: the chance to counter Amazon’s control over the e-book market and regain some leverage over sensitive matters like pricing.

Apple representatives have been in New York this week talking to the largest trade publishers, according to industry executives. They said Apple had proposed an arrangement under which publishers would get to set the price of their books, with Apple taking a 30 percent commission and the publishers keeping the rest. Steve Dowling, an Apple spokesman, declined to comment on what he called “rumors and speculation.”

Depending on whether Apple sets an upper limit on pricing, its model could be much more appealing to publishers, who resent how Amazon has aggressively discounted their books. Typically, Amazon charges $9.99 for new releases and best sellers, a price that other e-book vendors, including Sony and Barnes & Noble, have effectively been forced to follow.

While Amazon pays publishers a wholesale price typically equivalent to half the list price of a print book — meaning that Amazon generally sells new e-books at a loss — publishers fear that Amazon has accustomed buyers to unreasonably low prices. They say that if Kindle were to maintain its dominant position, it could force publishers to lower their wholesale prices.

The probable entry of Apple and its tablet into the e-book market gives publishers hope that they might gain some leverage in negotiations with Amazon. They could, for example, delay the release of e-books in the Kindle store while selling more expensive versions for the Apple tablet.

“There’s a battle going on for what is the value of a digital book,” said a publishing executive who did not want to be quoted by name because of the delicacy of discussions with Apple. “In that battle, Apple has put an offer together that helps publishers and, by extension, authors.” Some publishers warn that Apple’s terms can be restrictive in other ways, and that a model that looks good in theory may not be as attractive in practice.

And Amazon has moved to counter Apple’s appeals as well. On Wednesday it announced it would improve the royalty terms for authors or publishers who publish e-books directly onto the Kindle — essentially beckoning authors and their agents to split off e-book rights and sell them directly to Amazon.

Under the new terms, Amazon says it will offer authors and publishers who set e-book prices below $9.99 a royalty rate of 70 percent of the digital list price (after delivery costs, typically about 6 cents a book) — an obvious echo of Apple’s offering.

But publishers can anticipate another high-tech heavyweight entering the business: Google, which has pushed its own plans to begin selling e-books.

“The more companies that control consumer transactions, the more important the publishers’ role will be,” said Mike Shatzkin, chief executive of Idealog, which helps publishers develop digital strategies. “If Apple enters this market, and in three months Google follows, we may be looking at a completely different e-book world in the next year.”