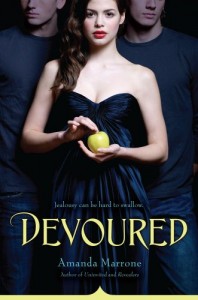 Everyone loves a Fairytale, it’s what we grew up on…stories of Cinderella and her glass slipper, tales of Little Red Ridding Hood and her fight to save her grandmother’s life.  We relish in the details, little girls spend hours pretending that their handsome prince is right around the corner, but what happens when there is no happy ending? Well, if you have read the original “Brothers Grimm Tales” then you already know, but for the rest of you…just imagine if the handsome prince wasn’t so handsome…imagine that after 5 months in the castle Cinderella concluded her new husband was a whack job…imagine if someone decided to twist the stories we grew up loving.

“Amanda Marrone” did exactly that in “Devoured” twisting and turning the story of Snow White in to a whole new tale of desperation and greed.

Megan has a little problem…her sister Remy is a ghost. A very small, very wet, very cranky ghost, who follows “Meggy” everywhere showing her glimpses of dead girls and throwing epic tantrums that cause light bulbs to shatter.  Her father is in a coma, her mother spends every waking hour training a dog to dance, and there’s a new boy in the mix that turns out to be a “Ghost Whisperer.”

After deciding her boyfriend has a little too much freedom, Megan takes a job playing the part of Snow White, in the “Land of Enchantment” amusement park, and while she’s ok with fake smiles and dads who tend to grope she’s not ok with hiding from approaching death in an oven in the Hansel and Gretel ride.

The writing was fluid and the plot was intriguing, like I said before…”Marrone” took a story we all know and love and flipped it into a full out battle of psycho ancestors and a magic mirror with a warped sense of humor.  The ending was a little bit abrupt, but by no means did it affect the story.

There were creepy moments inside a dark tunnel, a drunk mother who loves pink velour, haywire nursing home equipment, bad apples, a very dedicated father willing to do anything for his deranged daughter, hidden graves, and 1 very good reason to never loose your keys.

Overall I liked it… it was nice to see things from a different angle.

4 thoughts on “Robots Are Creepy!”