Where For Art Thou Kindle 3? 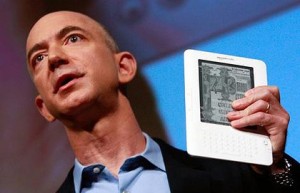 For those of you who think that the Kindle’s 1/3 of an inch thick architecture is just too thick, you may be able to check out a new slimmer Kindle come August this year. According to a Bloomberg.com article, Amazon.com plans to introduce the next version of the Kindle electronic-book reader.

The Kindle is a fashionably slim e-book reader that weighs in at only 10.2 onces, or lighter than your typical paperback book. It has 3G Wireless worldwide, and an impressive paper-like display that truly looks like paper, even in bright light.

Besides the book-sized Kindle, Amazon markets a magazine-size Kindle DX. But apparently another model is in the works.

According to Bloomberg via two people who wish to remain anonymous, “The device will be thinner and have a more responsive screen with a sharper picture” and “The new Kindle won’t include a touchscreen or color.”

As a matter of fact, Amazon states that while color prototypes are in the works, they are not ready for production. The two people who wish to remain anonymous are reportedly close to Amazon’s plans but do not wish to be public because the plans are not yet public.

For an added bonus, the Kindle uses its state of the art e-paper technology, giving the Kindle up to a week of battery life with the Wi-Fi on (much shorter than the Apple iPad LCD screen competitor) and the delay between page turns will also be shortened in the new version.

2 thoughts on “Where For Art Thou Kindle 3”