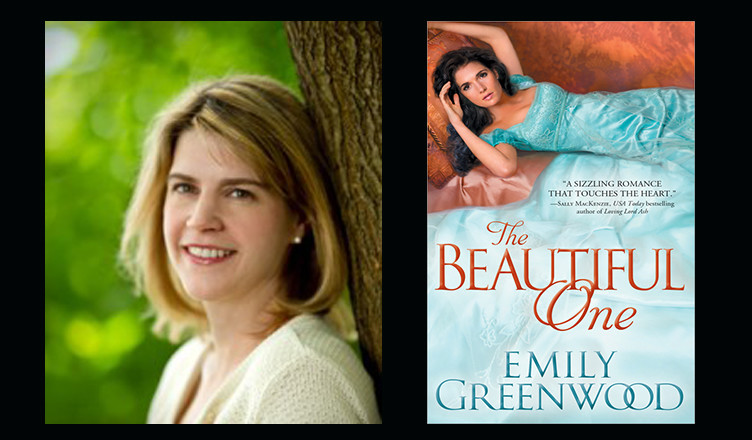 Emily Greenwood has a degree in French and worked for a number of years as a writer, crafting newsletters and fundraising brochures. But she far prefers writing playful love stories set in Regency England, and she thinks romance is the chocolate of literature.

A Golden Heart finalist, she lives in Maryland with her husband and two daughters.

On your nightstand now: THE UNEXPECTED CONSEQUENCES OF LOVE by Jill Mansel

Favorite book when you were a child: There were so many! One I loved when I was about ten was STARRING SALLY J. FRIEDMAN AS HERSELF by Judy Blume, which was about a girl who liked to make up stories about the people around her.

Book you’ve faked reading: THE RETURN OF THE NATIVE by Thomas Hardy. I was supposed to read it for school but absolutely could not get through it.

Book you’re an evangelist for:  THE INVENTION OF WINGS by Sue Monk Kidd. Loved it!

Book that changed your life: I think books change our lives all the time in subtle ways, often helping us see another way of looking at life. But in a concrete sense, I could say CHINA BRIDE by Mary Jo Putney changed my life, because it was the first romance novel I adored, and it made me into an instant addict—which eventually led to me writing romance.

Favorite line from a book:  “You pierce my soul.” PERSUASION, Jane Austen.

Which character you most relate to: Jane Eyre.

Book you most want to read again for the first time: I CAPTURE THE CASTLE by Dodie Smith.

Tell me about YOUR book: When THE BEAUTIFUL ONE starts, Anna Black is escorting a rebellious teenage girl to the home of her uncle, Will Halifax, Viscount Grandville. It’s a trip Anna didn’t want to make — she’s been trying to stay out of sight because of a scandalous book of naked pictures that were secretly made of her. The book, called THE BEAUTIFUL ONE, is making the rounds of Society, and everyone wants to know the identity of the lovely woman depicted in it. So when Anna arrives at the viscount’s estate, she plans to simply deliver the girl and return to her hiding place. The trouble is, the viscount won’t let his niece stay.

Depressed and angry because of the death of his wife a year before, Will knows he’s become little more than a beast of a man, and he believes it’s better for everyone if he keeps to himself. But his attempts to bully the impertinent Anna into taking his niece somewhere else fail spectacularly, and he finds himself needing Anna’s help. They strike a bargain that she will stay for a month as Lizzie’s governess, but even before the end of the first night, with attraction flaring between them, they’re both aware that things might not work out as planned. 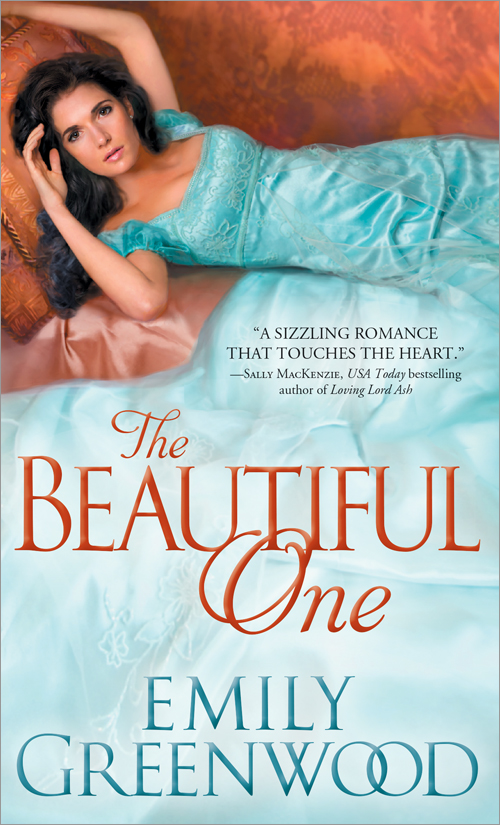 A PICTURE SAYS A THOUSAND WORDS…

BUT NOT THE MOST IMPORTANT ONES

The unlikely center of the scandal, Anna Black is forced to flee home as disaster looms. Her tomboy’s heart and impertinent tongue serve her well when she meets the most brooding viscount ever to darken a drawing room. Will Halifax, Viscount Grandville, has his reasons for pushing people away, and when his tempestuous teenaged ward arrives on his doorstep, he presses Anna to take on her care. As Anna begins to melt the Viscount’s frozen heart, she knows the more she loves, the more she has to lose. For although Will cares nothing for what makes Society titter, he has yet to see The Beautiful One.

Rounding the edge of the wood at the back of Stillwell, he was startled to see his ward standing about. She was looking up at a tree in which, from the movement of its leaves and branches, some large creature seemed to be thrashing. A crow?

As he drew nearer to the oblivious Lizzie, he was almost certain he heard a woman’s voice coming from among the leaves. Lizzie stepped closer to the tree and lifted her hands upward, and he saw that on a thick branch perhaps six feet off the ground were perched two feet in past-their-prime dark ankle boots, and above them he was treated to a view of trim calves he could not regret. The surrounding leaves and branches mostly obscured the rest of his recently hired governess. In the instant before Lizzie became aware of Will, he saw that she held in her cupped hands a fluffy white ball.

Lizzie turned and saw him, her mouth forming into an “O” as a voice called from above, “Lizzie? I’m ready for the owlet.”

“Er,” said Lizzie, looking at him. In the clear afternoon light he noticed that her eyes were a different color blue than Ginger’s had been. But the shape was Ginger’s, as were the eyebrows. Not her fault, but he couldn’t go the route of compassion. It would only muddy what had to be. He looked past her and lifted a hand to rub his eyes.

“Miss Black,” he said, knowing he could not avoid asking, “what on earth are you doing?”

There was a pause as she absorbed his arrival and a shifting of the feet on the branch near his forehead as they drew together, perhaps in an attempt at modesty.

“Ah, my lord,” she said from above him. “Good afternoon. Lizzie and I are engaged in returning a fallen owlet to its nest. It was her idea. She is very caring toward animals.”

He could feel Lizzie’s big blue eyes on him though his own were still covered by his hand. He had no doubt as to whose idea it had been to climb the tree. He hadn’t truly expected Anna Black to be a typical sort of governess, had he?

“Come down at once.”

“If you will wait just a moment, my lord,” she said breezily, “I shall be down directly. Lizzie, the owlet.”

He tapped her on the shoulder before she could lift her arms farther. “Give me that creature, please.”

She looked uncertain, but she clearly didn’t want to displease him, and she handed over the motionless owl. He took it carefully from her and did not return her tentative smile. He could feel her eagerness for him to acknowledge her, but he let it flow past him.

The leaves and branches above them shook as Anna Black crouched down and extended her hand for the animal. Her bonnet, the same horrible blue one, had fallen on its strings around her neck again, and her hair, apparently loosened by her climb, curled crazily about her face as if she were some unkempt urchin, accentuating her pert nose and reminding him of her jack-in-the-box appearance from the coach.

Her pink lips pressed outward at the sight of him; doubtless she was annoyed by his arrival, but her expression didn’t draw an answering wave of annoyance from him. Instead, her lips were making him wonder, unaccountably, what it might feel like to be kissed all over by pink butterflies.

“The owlet, please,” she fairly ordered him.

“Don’t be ridiculous. Get down this instant before you fall. I will return the owlet.”

“I am already positioned to do so. If you will just give it to me, I can put it back and then receive your displeasure properly on the ground.”

He grunted. Why did he keep finding himself in out-of-his-control conversations with this maddening woman?

In his palm the owlet’s heart beat with a rapid, stressed flutter. He reached up his hand, and she gently took the animal and disappeared into the foliage.

From above came a few rustling noises, then the angry screech of what had to be an adult owl and a yelp. Fearing Miss Black would fall, he stepped forward to catch her, but at that same moment she jumped neatly down, so that she landed right in front of him.

He grabbed her arms, a reflex to steady her. She didn’t need his help, but their eyes locked, and for a moment he read vulnerability there before it was replaced with the hard glint of independence. She smelled like sunshine and crushed leaves, and he felt the slim softness of her arms and his body’s yearning to hug her close.

She stepped away from him. It had all happened in the space of a few moments.

But as he watched her brush some leaves from her skirts with her head down, that vulnerability he’d glimpsed tugged at him. Who was this woman? Where had she come from? She was clearly educated and intelligent, and though she was too forthright and she dressed terribly, she was not rough, merely unusual.

That life-on-the-edge-of-propriety quality he’d observed in her the night before had suggested that she’d known some hardship, or that she had some burden she might trade for money. And yet today, in the company of his ward, she looked at ease, even if her eyes seemed to be hiding something.

3 copies of The Beautiful One by Emily Greenwood