For those of you planning a trip to BEA in June, they have just announced a new event! Neil Young, who has just announced his plans to write a memoir is hosting an Authors lunch! The event is free for all BEA attendees, (as long as you are sporting a BEA badge) and is scheduled to take place June 6th at noon in the Special Events Hall in the Javits Center. Also planning to make an apperance: Stephen Colbert, Jo Nesbo (Phantom) John Green (The Fault In Our Stars) Lois Lowry (The Giver) and Chris Colfer (Glee.) To find out more or learn how to regesiter for the event stop by the BEA website! 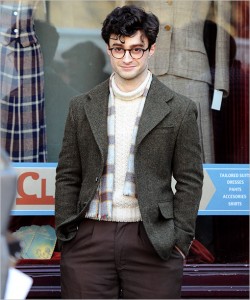 There is no release date (yet) but according to IMDB we should see Daniel on the big screen again sometime in 2013.

Here are the lyrics… just in case you are curious.

My favorite line: “It’s sad I had to kick him out my house though —
He Mispronounced an author – MARCEL PROUST”

Read so hard librarians tryin’ ta FINE me­,
They can’t identify me,
Checked in with a pseudonym, so I guess you can say I’m Mark Twaining.
Read so hard, I’m not lazy.
Go on Goodreads, so much rated.
Fountainhead, on my just read, gave it four stars, and then changed it.
Read so hard, I’m literary.
Goosebumps series, TOO SCARY!

Animal Farm, Jane Eyre
Barnes & Nobles, Foursquare it
No TV, I read instead
Got lotsa Bills, but not bread
BURROUGHS , GOLDING, SHAKESPEARE — all dead

Read so hard, got paper cuts
On trains while you’re playin’ connect the dots
All these blisters from turning pages
Read so hard, I’m seeing spots

Your Sudoku just can’t compare
Nor Angry Birds cos look it here
My Little Birds is getting stares
(pause)
This print’s rare.

Read so hard, I memorize, The Illiad… I know lines.
Watch me spit, classic lit, epic poems that don’t rhyme.
War and Peace, piece of cake, read Tolstoy in 3 days.
Straight through, no delays.
Didn’t miss a word. Not one phrase.

He said Shea can we get married at the Strand
His Friday Reads are bad so he can’t have my hand
You ball so hard, OK you’re bowling
But I read so hard, I’m JK Rowling

That shit cray
Ain’t it, A? What you readin’?
AQ: DeMontaigne.
You use a Kindle? I carry spines.
Supporting bookshops like a bra, Calvin Klein.

Nerdy boy, he’s so slow
Tuesday we started Foucault
He’s still stuck on the intro? He’s a no go.
It’s sad I had to kick him out my house though —
He Mispronounced an author – MARCEL PROUST

Don’t read in the dark
I highlight with markers
While laying in the park
And wearing Warby Parkers
Marriage Plot broke my heart
And it made me read Barthes
I special ordered a
A softcover not hard- HUAH?AHEHA?!

I am now marking my place
Don’t wanna crease on my page
Don’t let me forget this page
I got bookmarks at home
But I forgot one for the road
AQ: I got a bookmark I can loan
La Shea: Know how many bookmarks I own?

I am now bookmarking my page x3
Don’t let me forget this PAGE….