The best things in life always come in pairs…don’t you thing? Peanut butter and jelly! Mac and Cheese. Mel Gibson and Prozac, but nothing could be better than this… Downtown Abbey and The Book Thief! That’s right ladies and gents, the beloved YA novel “The Book Thief” written by Marcus Zusak which follows a young girl from Germany during WWII who steals books as a way to cope with reality is coming to the big screen! And…who better to bring those beautiful words to life than “Downtown Abbey’s” very own Brian Percival. *happy dance* Wait… you don’t know who Brian is? *gasp* well…if you took my advice in February and watched the mini-series adaptation of Elizabeth Gaskell’s “North & South” he directed that too! So…for those of you that have yet to read this beloved book, hop to it, because it’s Hollywood cousin is sure to be ready for your popcorn loving tushies before you know it! 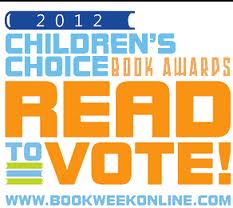 The Children’s Book Council’s fifth annual Children’s Choice Book Awards, in association with Every Child a Reader, are now in full swing. Children and teens may vote to help determine the winners among 30 finalists in six categories, including Author and Illustrator of the Year. Last year a record-breaking 525,000 children and teens took part in the contest.

Young readers may now cast their votes for their favorite books, author and illustrator at bookstores, schools and libraries, and at www.BookWeekOnline.com until May 3. The winners will be announced at the annual Children’s Choice Book Awards Gala on May 7 at Espace in New York City as part of Children’s Book Week (May 7-13).

A Book To LOOK Out For

Marianne Daventry will do anything to escape the boredom of Bath and the amorous attentions of an unwanted suitor. So when an invitation arrives from her twin sister, Cecily, to join her at a sprawling country estate, she jumps at the chance. Thinking she’ll be able to relax and enjoy her beloved English countryside while her sister snags the handsome heir of Edenbrooke, Marianne finds that even the best laid plans can go awry.

From a terrifying run-in with a highwayman to a seemingly harmless flirtation, Marianne finds herself embroiled in an unexpected adventure filled with enough romance and intrigue to keep her mind racing. Will she be able to rein in her traitorous heart, or will a mysterious stranger sweep her off her feet? Fate had something other than a relaxing summer in mind when it sent Marianne to Edenbrooke.