Afternoon Kindle-ites. Yes, I plan on posting a review tonight, but I just finished writing this little ditty and thought.. “What the hell. Post them both.” So… here it is, another Misty original. (Let the bashing begin.) 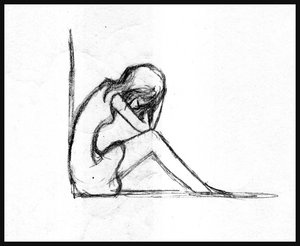 The color was always the same, crimson red, but that was not what mattered. The feeling that the little splash of red produced was what mattered. Relief. Like a bottle of soda that has been sitting in the sun for too long and is aching to be opened before it explodes. She didn’t care that she was making a mess; streaking her clothes and the already dirty tile floor with blood, those were just details; issues that could be dealt with when the time came, but for now…the only task at hand was to release the words that were trapped inside of her veins… pumping steady strings of negativity and pain towards her brain.

“You are worthless! Why do I even bother.”

When she was little her mother had very diligently taught her that “sticks and stones could break her bones, but words could never hurt her.” Unfortunately that wasn’t how life worked. In reality words were much more damaging than a damn bruise would ever be. Words had a way of weaving their way inside of you, festering until you could actually smell the stink of them radiating off of your skin. A broken arm or a bruised jaw? Surfaces grazes…things that could be easily tended to by a doctor.

The first time she panicked she had been 14, a child. Susanna Beecham, of the “we-have-more-money-than-God” Beecham’s, decided to point out just how pathetic she actually was.

“You are ugly… did you know that? I mean… not average ugly, that could be tolerated, YOU are ogre worthy, and…” because obviously that wasn’t enough, “You smell like my dog pissed on you. Do us a favor and quit taking showers in your toilet.”

Yep, that was all it took. The next thing she knew she was huddled in the AV closet running a broken slide reel back and forth across her forearm. She had absolutely zero idea what she was doing, all she knew was that it felt better. At first, the pain gave her something else to focus on, but then it morphed into something else entirely. The answer.

For years she had been forced to hold all of her emotional baggage inside, but this… this habit she instinctively knew was sick and wrong, allowed her to let go of it. She could actually see the words as they flowed out of her, each drip adding something new to the pile of misery that was puddling on the floor.

When had someone else come in the room? God… she had always been so careful, letting her guard down was a no-no. She looked around desperately for the lime green hoodie she had drug into the corner with her.

Maybe if she was really quiet he would just go away. She knew exactly who it was. That scrawny audio visual kid… Paul.. Saul… whatever, his name was not the issue. This was a disaster. Under no circumstance would her current position look normal. She was holding a razor blade for fuck sake, that alone would be a cause for concern, not adding in the stark red blotches of human life that surrounded her like mine fields.

She heard her name called one more time before she saw his face, freckle covered and pale from lack of sun, peek around the corner.

Immediately she rose, hoping that the movement would distract him from the scene he was witnessing, but the surprise, and then disgust, that registered in his eyes was unmistakable.

“What are you doing?” he asked, his mouth agape, clearly shocked from what he was seeing.
“Nothing… go away.”
“What do you mean nothing… it looks like a damn massacre in here.” He looked down, moving his foot slightly to the left to avoid getting blood on the bottom of his shoe.
“I… I was just looking for something, shit… quit staring at me.” She grabbed her bag, that had somehow mysteriously made it’s way to the middle of the room, and started to walk off. All she needed was time. If she could get away, clean herself up and then avoid Paul/Saul for a few days this whole “thing” would just disappear. Lose shape and then drift off into a string of never-ending tomorrows.

“Wait, where are you going?” he asked, taking a timid stepping closer to her, and then gently retrieving her bag from her shoulder, only to immediately turn around and chunk it a good 10 feet from where they were currently standing. “You are hurt, let me help you.”
“I’m fine,” she said, though her mind was setting off sirens even a deaf person couldn’t help but hear.
“You are very clearly, not fine, sit down.”

Like one of those saps in the movies her mother loved to watch so much, he moved beside her and pulled out one of the rooms excruciatingly uncomfortable plastic chairs. Sensing that a battle would be eminent if she refused she did as she was told. Reluctant, but attentive to the directions she was being supplied.

The boy she vaguely knew only stared.

“No.. seriously…what are you going to do… fix me?” Her words, though delivered with a heavy helping of sarcasm, were laced with the truth. The only truth to have passed her lips for years, on purpose or by pure accident she was unclear.

For a second she saw recognition flash across his face, and then it was gone; replaced by a sadness that seemed to make the air in the room become thick and stale.

“Yes” he said, reaching a hand across the table to push a piece of her matted black hair behind her ear.

Joey’s head shot up, her eyes locking on the figure in front of her, and for the first time seeing the tiny lines of a boy who had seen too much.

“I’m going to help you clean up your words, and then… I’m going to teach you some new ones.”