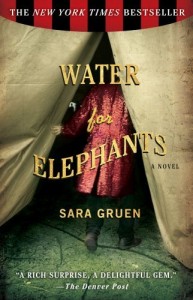 I don’t know about the rest of you, but I have a very serious problem with buying books and then not reading them. Ok, obviously I read them, (eventually) but sometimes it takes me months.  I will buy a book (that I just CANNOT WAIT to read,) slap it on my kindle, read 2 paragraphs and then stop.  I will then move on to some other random book I have considerably LESS interest in, read that, and then repeat the cycle. This completely-insane-I-may-be-schizophrenic habit is exactly what happened to me with “Water For Elephants” by Sara Gruen.

I have had this book on my Kindle for months… MONTHS, and for some reason I just couldn’t bring myself to read it.  I would like to blame it on my daunting review que but, then I would be lying, (and really…who has time for that) I could even blame it on my kids. (Do you know how hard it is to concentrate with 2 kids who decided playing basketball INSIDE is a great idea?) Hell… I could even blame it on having a full time job, but none of those would do the “real reason” any justice. The truth is… my brain refuses to comply with popular demand.

Finally… this week, (however) I was able to shut my energizer bunny type brain off and get down to business. It was do or die time you see; the movie comes out next week and if this book wasn’t under my belt I would be flick-less next Friday.  Next time I’ll tell my brain to jump off a bridge.  I should have read this book when I first bought it.  It was just that good.

At 23 life can be difficult for anyone, but for Jacob Jankowski, a veterinary student at Cornell, difficult is a bit of an understatement. Not only has he just tragically lost both of his parents, but thanks to the bank he is now broke, and homeless. Unclear as to what to do next Jacob starts walking, unfortunately a few hours later he realizes he is lost and his feet are covered in blisters. In short… he’s no better off than when he started, but… all of that is about to change when he hears a train is coming his way.  With no clue as to where he is, or where to go next, Jacob makes a decision; hop the train and see where it takes him, little did he know that that would be the circus. Finding himself knee deep in the Benzini Brother’s most spectacular show on Earth; Jacob quickly discovers that his “previous” life may (in fact) do him justice in his “new” one, and takes on a job as the circus’ official veterinarian. With animals however, comes their performers and that’s where things start to get sticky. Marlena is beautiful, kind, smart, and more importantly… taken. Will Jacob be able to control his feelings for the one person he is forbidden from caring about? Why and how are people disappearing off of the train, and what REALLY happened that fateful day when the world flipped upside down and all hell broke loose?

Gruen is very clearly a masterful storyteller.  Not only did she deliver a gasp worthy love story, but the background in which her story took place was so artfully crafted that after only 1 chapter I found it impossible to put down.  The detail involved in creating the grit of a traveling circus (while at the same time tacking such issues as the Great Depression and Prohibition) was genius, and to do it through the eyes of 1 man at very different times in his life (23 and 90 or 93) added a depth and emotional connection that would have otherwise been lost if penned differently. The story as a whole was perfectly plotted, leaving zero downtime for the readers mind to wonder off or lose focus of the moral dilemmas at hand, and at the end of the day became: just another one of those books that sucks you in and doesn’t let you go.

Happy Reading my fellow Kindle-ites and remember: animals may not be able to talk to you, but they can understand you. Be nice.

4 thoughts on “Bringing Down The House”