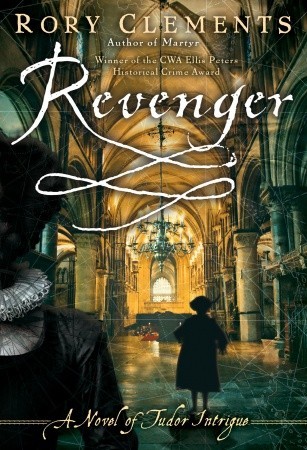 A Monster Calls by Patrick Ness

At seven minutes past midnight, thirteen-year-old Conor wakes to find a monster outside his bedroom window. But it isn’t the monster Conor’s been expecting — he’s been expecting the one from his nightmare, the nightmare he’s had nearly every night since his mother started her treatments.

The monster in his backyard is different. It’s ancient. And wild. And it wants something from Conor. Something terrible and dangerous. It wants the truth.

From the final idea of award-winning author Siobhan Dowd — whose premature death from cancer prevented her from writing it herself — Patrick Ness has spun a haunting and darkly funny novel of mischief, loss, and monsters both real and imagined.

In his critically acclaimed debut thriller, Martyr, Rory Clements introduced readers to the unforgettable John Shakespeare, chief intelligencer to Queen Elizabeth I and older brother to Will.

Now, five years later, the Queen needs Shakespeare’s services once more. Not only is England still at war with Spain, but her court is riven by savage infighting among ambitious young courtiers.

Shakespeare is summoned by Elizabeth’s cold but deadly Privy Councillor Sir Robert Cecil and ordered to undertake two linked missions: to investigate the mystery of the doomed Roanoke colony in North America—Sir Walter Ralegh’s folly—and to spy on Cecil’s rival, the dashing Earl of Essex.

Essex is the brightest star in the firmament, the Queen’s favorite. But when Shakespeare enters Essex’s dissolute world, he discovers not only that the Queen herself is in danger, but that he and his family are also targets. With a plague devastating the country, Catholics facing persecution and martyrdom at the hands of an infamous torturer, and John’s own wife, Catherine, possibly protecting a priest—Shakespeare has his own survival to secure, as well as that of his fading but still feisty Queen.

Around the world, black handprints are appearing on doorways, scorched there by winged strangers who have crept through a slit in the sky.

In a dark and dusty shop, a devil’s supply of human teeth grown dangerously low.

And in the tangled lanes of Prague, a young art student is about to be caught up in a brutal otherwordly war.

Meet Karou. She fills her sketchbooks with monsters that may or may not be real; she’s prone to disappearing on mysterious “errands”; she speaks many languages—not all of them human; and her bright blue hair actually grows out of her head that color. Who is she? That is the question that haunts her, and she’s about to find out.

When one of the strangers—beautiful, haunted Akiva—fixes his fire-colored eyes on her in an alley in Marrakesh, the result is blood and starlight, secrets unveiled, and a star-crossed love whose roots drink deep of a violent past. But will Karou live to regret learning the truth about herself?

The Boy With The Cuckoo-Clock Heart by Mathias Malzieu

Edinburgh, 1874: Little Jack is born with a frozen heart and immediately undergoes a life-saving operation — the implantation of a cuckoo-clock in his chest. From then on his days all begin with a wind-up, in this dark, tender fairy tale spiced with devilish humor.

The Incorrigible Children of Ashton Place by Maryrose Wood

Of especially naughty children it is sometimes said, “They must have been raised by wolves.”

The Incorrigible children actually were.

Since returning from London, the three Incorrigible children and their plucky governess, Miss Penelope Lumley, have been exceedingly busy. Despite their wolfish upbringing, the children have taken up bird-watching, with no unfortunate consequences—yet. And a perplexing gift raises hard questions about how Penelope came to be left at the Swanburne Academy for Poor Bright Females and why her parents never bothered to return for her.

But hers is not the only family mystery to solve. When Lord Fredrick’s long-absent mother arrives with the noted explorer Admiral Faucet, gruesome secrets tumble out of the Ashton family tree. And when the admiral’s prized racing ostrich gets loose in the forest, it will take all the Incorrigibles’ skills to find her.

The hunt for the runaway ostrich is on. But Penelope is worried. Once back in the wild, will the children forget about books and poetry and go back to their howling, wolfish ways? What if they never want to come back to Ashton Place at all?