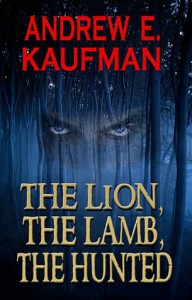 A girl can only take so much angst, so realizing (2 days ago) that I have read WAY to many YA books lately, (and I’m starting to have horrendous HS flashbacks) I decided to jump back into an old favorite of mine…Psychological thrillers.

Back in December I left y’all hanging, (with what I’m now proclaiming to be a ridiculously tiny excerpt,) of Andrew’s Kaufman’s newest book “The Lion, The Lamb, The Hunted.”  And since I too, was left hungry for more, I decided it was high time that I get to it.

I am not a newbie when it comes to Andrew’s work, as a matter of fact…I think I shamed myself in my review of his first book (While the Savage Sleeps) by admitting that I got a little choked up. (*hangs head*) but what I expected from his latest, (I’m just gonna say masterpiece) and what I got were two VERY different ends of the spectrum.  To be honest, I loved “While The Savage Sleeps” (as totally completly messed up as it was) and I was certain (though I adore Andrew) that this book would pale in comparison.  I was wrong.  Dear Lord I was so wrong I’m willing to publicly humiliate myself to prove how wrong I actually was, (not that I don’t already do that…daily.)

So what made it so wonderful that I’m having a hard time forming a complete sentence?  It embraced vulnerability.

“She only stepped outside for a minute…
But a minute was all it took to turn Jean Kingsley’s world upside down–a minute she’d regret for the rest of her life.

Stepping into her worst nightmare…

Because when she returned, she found an open bedroom window and her three-year-old son, Nathan, gone. The boy would never be seen again.

A nightmare that only became worse.

A tip leads detectives to the killer, a repeat sex offender, and inside his apartment, a gruesome discovery. A slam-dunk trial sends him off to death row, then several years later, to the electric chair.

Case Closed. Justice Served…Or was it?

Now, more than thirty years later, Patrick Bannister unwittingly stumbles across evidence among his dead mother’s belongings. It paints his mother as the killer and her brother, a wealthy and powerful senator, as the one pulling the strings.

What really happened to Nathan Kingsley?

There’s a hole in the case a mile wide, and Patrick is determined to close it. But what he doesn’t know is that the closer he moves toward the truth, the more he’s putting his life on the line, that he’s become the hunted. Someone’s hiding a dark secret and will stop at nothing to keep it that way.

The clock is ticking, the walls are closing, and the stakes are getting higher as he races to find a killer–one who’s hot on his trail. One who’s out for his blood.  ”

One thing I find disconcerting about male leads in psychological thrillers is that they always lean towards that “Alpha Male” mentality. “Don’t worry Little Lady…hide behind me, I’ll protect you with my insanely disproportionate gun!” That was not the case with LLH.  While Andrew (very easily) could have conformed to the standard, (the situations certainly called for it) he chose to present Patrick as a humble, slightly confused, extremely damaged, vulnerable, REAL PERSON.  And his choice in doing so added significant weight to Patrick’s broken mental state, (don’t worry, he’s not crazy, just… ok, he’s a little crazy.) So instead of having to forcefully imagine Pat’s state of mind, (which again is usually implied in novels like these, it’s the killers that are usually quacks, not the heroes) it was right there, spelled out for you in brilliantly penned repetition. (unlovable…unlovable…unlovable.) And on a slightly different, (but completely relevant) note, I don’t think I have ever, in the existence of my extensive reading history EVER (<–yes, that is an all caps EVER) wanted to smack the piss out of someone more than I did Patrick’s mother (who in no way even deserves to be named.) Which only goes to show you that strong character development can induce strong feelings. (Very, very…strong feelings. *throws fist into the air*)

As for the plot. WOW.  It was twisty, it was turny and right at the exact moment that I thought, (in all my stunning brilliance) that I had it all figured out, I was told, (very abruptly) that I was wrong. (This was also the exact moment that my husband decided to interrupt me and got a pillow chunked at his head.)

Wonderful descriptive passages, captivating dialogue, and a mound of heartbreaking moments aside, (because those obviously don’t matter. HA!) It was all that AND a bag of Nacho Cheese Doritos. (That’s chunky girl code for awesome.)  I highly recommend this for fans of thrillers, mysteries and, well….books. This one is worth every freaking dime!

Happy Reading my fellow Kindle-ites and remember: Who knew you could put a larynx there! Hmm.