Happy Thursday! Sorry about the late night post last night but life got in the way…better late than never I suppose.  Anyways, here is a younger reader novel that has been getting an enormous amount of buzz.  I’m sorry to say that I haven’t had the time to check it out myself, but if you have…please… let me know what you think.

Happy Reading my fellow Tweeny-Boppers and remember: When THIS worlds got you down, pick up a new one!

The Evolution of Calpurnia Tate 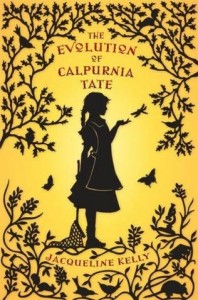 Starred Review. Grade 5–8—A charming and inventive story of a child struggling to find her identity at the turn of the 20th century. As the only girl in an uppercrust Texas family of seven children, Calpurnia, 11, is expected to enter young womanhood with all its trappings of tight corsets, cookery, and handiwork. Unlike other girls her age, Callie is most content when observing and collecting scientific specimens with her grandfather. Bemoaning her lack of formal knowledge, he surreptitiously gives her a copy of The Origin of Species and Callie begins her exploration of the scientific method and evolution, eventually happening upon the possible discovery of a new plant species. Callie’s mother, believing that a diet of Darwin, Dickens, and her grandfather’s influence will make Callie dissatisfied with life, sets her on a path of cooking lessons, handiwork improvement, and an eventual debut into society. Callie’s confusion and despair over her changing life will resonate with girls who feel different or are outsiders in their own society. Callie is a charming, inquisitive protagonist; a joyous, bright, and thoughtful creation. The conclusion encompasses bewilderment, excitement, and humor as the dawn of a new century approaches. Several scenes, including a younger brother’s despair over his turkeys intended for the Thanksgiving table and Callie’s heartache over receiving The Science of Housewifery as a Christmas gift, mix gentle humor and pathos to great effect. The book ends with uncertainty over Callie’s future, but there’s no uncertainty over the achievement of Kelly’s debut novel.—Jennifer Schultz, Fauquier County Public Library, Warrenton, VA Copyright © Reed Business Information, a division of Reed Elsevier Inc. All rights reserved.

*Starred Review* Growing up with six brothers in rural Texas in 1899, 12-year-old Callie realizes that her aversion to needlework and cooking disappoints her mother. Still, she prefers to spend her time exploring the river, observing animals, and keeping notes on what she sees. Callie’s growing interest in nature creates a bond with her previously distant grandfather, an amateur naturalist of some distinction. After they discover an unknown species of vetch, he attempts to have it officially recognized. This process creates a dramatic focus for the novel, though really the main story here is Callie’s gradual self-discovery as revealed in her vivid first-person narrative. By the end, she is equally aware of her growing desire to become a scientist and of societal expectations that make her dream seem nearly impossible. Interwoven with the scientific theme are threads of daily life in a large family—the bonds with siblings, the conversations overheard, the unspoken understandings and misunderstandings—all told with wry humor and a sharp eye for details that bring the characters and the setting to life. The eye-catching jacket art, which silhouettes Callie and images from nature against a yellow background, is true to the period and the story. Many readers will hope for a sequel to this engaging, satisfying first novel. Grades 4-7. –Carolyn Phelan