Today’s “It’s A Tween Thing” is an Amazon’s “Best of the Month” for April, and the start to a new series called “Keepers of The School”  Hope your budding humans enjoy it!

Happy Reading my fellow Kindle-ites and remember: When THIS worlds got you down, step into a NEW one.

We The Children (The Keepers of The School) 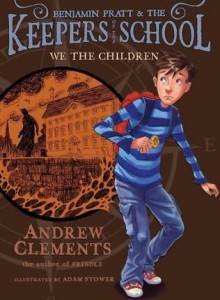 This first novel in the new Benjamin Pratt and the Keepers of the School series centers on young Benjamin’s efforts to save his historic elementary school from amusement-park developers. The school was founded in the late eighteenth century by an eccentric sea captain, Duncan Oaks. In their attempt to save the school, Benjamin and his friend Jill uncover a long string of clues and discover that the school’s janitor is not as innocent as he appears. Jill and Benjamin have still not fit together all the missing pieces toward the end of the story, when Clements sends Benjamin on an exciting side trip to a sailing regatta, where he competes and saves a fellow racer. Several other youth novels feature kids facing off against greedy, nefarious developers. What sets this title apart is the skillful way that Clements conveys Benjamin’s growing appreciation of his seaside hometown’s landscape and history. Readers will look forward to finding out how the disparate clues come together in coming installments. Grades 4-6. –Todd Morning