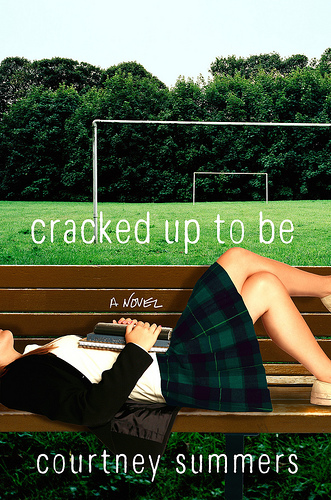 Finding a book that discusses the nature of addiction is really not all that hard.  It’s even less difficult when you are trying to find a novel about TEEN addiction, but what many fail to see, are the books out that there have abstract addiction.  The first thing people think of when the word “addiction” is drugs, but limiting yourself to only a few narrow paths can ultimately hinder a persons understanding.  In “Cracked Up To Be” “Courtney Summers” tackles a whole new line of addiction… GUILT. (Ok, I know you are probably questioning how guilt can be associated with an inability to stop one’s actions, but trust me… it is more than relevant.)

Parker Fadley is a wreck.  She drinks, she skips school, she refuses to conform to her friends needs, and she puts whole new meaning to the word brooding, but the most important thing to understand is that Parker used to be perfect.  She was a bright shining star, captain of the cheer-leading squad,and all that that entailed, but when a much contested night of drinking stirs a pot of scandalous secrets, Parker and her party of 4 friends suddenly turns to 3.  Can she ever see past that 30 seconds in the woods? Will her guilt for not saying anything eventually kill her?  And is there anybody out there that can convince her that taking her own life won’t bring back someone elses?

The layout in which “Summers'” wrote was actually quite intriguing.  Instead of starting at the beginning of the story she started in the middle, and then sporadically filled in the blanks with flashbacks and daydreams.  Her character development was spot on in every account, clearly painting a picture of her characters behaviour before and after their friends disappearance, and even going so far as to paint pictures of who they will become.  The writing was dark without being daunting, and expertly plotted to show the full effects ones decision can do to hinder or help their general existence. “Cracked Up To Be” was not without fault however… some of the flashbacks became overly repetitive and the conversations were sometimes choppy, but these nuances are easily ignored and for the most part overshadowed by what is actually occurring at the time.

I do not think that this is a generalized read however, there are large groups of people that will not like or appreciate the storyline…but for the following people I suggest you give it a try.

If you have a teenager who is acting out in school (not normal crap, more the drinking from a flask type trouble) then this book my shed light on how to approach and have a helpful conversation with them.

If you are a teenager and have experienced a loss and don’t know how to properly channel  your feelings, this book may help you understand the different paths in which to express yourself.

And if you work closely with teenagers in any sort of outreach, church youth, or educational venue, this book may actually help you understand a teenagers train of thought.

There is no doubt in my mind that I will read more of “Summers” work, because I have two budding children and need all the help I can get for their future angst, but more than anything… I enjoyed her perspective on things, even if they were a tad dark.

Happy reading my fellow Kindle-ites and remember: there is no one out there telling you to to hide your feelings but yourself.