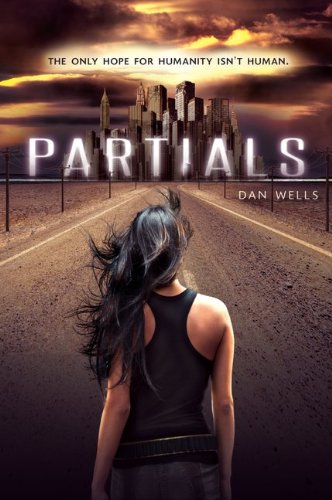 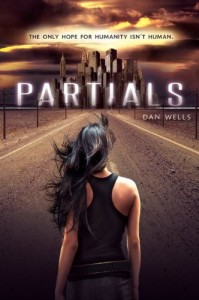 Imagine for a second that the world is ending; that there are only a few thousand humans left on the planet, and they are unable to reproduce.  Oh…you can have a baby, but the chances of it living past day 2 are ZERO, which makes you the LAST in a very long line of humans that will eventually time out.

What would you do?

A: Curl up into the fetal position and pretend it’s all just a bad dream?

B: Blame your eventual demise on the government? or

C: Do something about it?

The answer for Kira, the lead character in “Partials” by Dan Wells is C.  Do something about it.

“The human race is all but extinct after a war with Partials—engineered organic beings identical to humans—has decimated the population. Reduced to only tens of thousands by RM, a weaponized virus to which only a fraction of humanity is immune, the survivors in North America have huddled together on Long Island while the Partials have mysteriously retreated. The threat of the Partials is still imminent, but, worse, no baby has been born immune to RM in more than a decade. Our time is running out.

“Kira, a sixteen-year-old medic-in-training, is on the front lines of this battle, seeing RM ravage the community while mandatory pregnancy laws have pushed what’s left of humanity to the brink of civil war, and she’s not content to stand by and watch. But as she makes a desperate decision to save the last of her race, she will find that the survival of humans and Partials alike rests in her attempts to uncover the connections between them—connections that humanity has forgotten, or perhaps never even knew were there.”

Now, in order to appreciate this book you must first understand a few things.  #1 it is a dystopian novel, but unlike the relatively fluffy ones that we enjoy (you know…the ones weighted down by forbidden love and teenage angst in a world gone mad) Partials is a “hard-core” dystopian.

Well… for starters, the plot is NOT about finding that special someone in the middle of the night whose duty is to hold your hand and tell you everything is ok; it’s about survival at it’s most basic of levels.  While there is technology, it is either your enemy, or you can’t use it for lack of power.  There is a government, but their moral compasses are…questionable, and though the world is wide enough to afford you freedom, you are not allowed freedom.

I’m not insinuating that there aren’t character connections, because there are, (in the most unlikely of places in fact) but they are vastly different from the books that are currently out there, which…is actually rather refreshing if you ask me.

The 2nd, and probably the most important factor to under before you dive into this 480 page adventure is that it is VERY detailed.  Now, while this doesn’t bother me, (I’m used to forensic anthropology novels that spend 80 pages establishing the live cycle of a maggot) it may drive some of you crazy.  Why? because it is science related.  Think of it as reading the manual to your microwave over and over and over.  Some of you might actually find it beneficial to skim (*gasp* yes… I said skim) these parts in order to reconnect with the plot.  Me? I’m not a skimmer, but I can see where several people might be tempted to put down the book and walk away when Wells starts to go on his robot rants if they don’t.

So, what did I think overall?

Well, despite the occasional meandering into clever-clever land, I actually really enjoyed it.  It was original, well thought out and had several sub-plots that helped establish the conditions of their post-war/virus lives.  While it may not be everyone’s cup of tea, it is definitely a winner for those of you that enjoy the battle of life, and as an added bonus…the ending was spot on, all the way down to it’s book #2 setup.

Happy Reading my fellow Kindle-ites and remember: it’s not about HOW far you will go, but WHY you are willing to.

3 thoughts on “Back To The Bubble!”