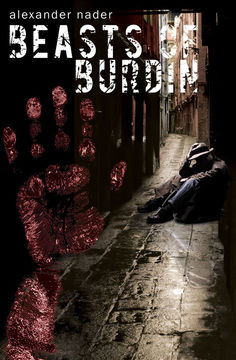 J. Taylor Publishing is giving away FIVE ARCs of Beasts of Burdin by Alexander Nader!

In fact, to get far far away, he dragged Nora, his rockabilly secretary, from Miami to the Tennessee mountains where he’s lived a life of peace—if peace can be defined as drowning in scotch and taking private eye jobs to keep the lights on. Jobs for real people. Not demons.

He’s retired from that. Remember?

Demon hunters aren’t a dime a dozen, though, and when Ty’s brother asks him for a favor—just one—what’s a brother to do? Agreeing to take down one hillbilly demon shouldn’t take that long. In. Decapitate. Out. Favor complete. Back to the office where Nora and his bottle of whiskey are waiting.

Unfortunately for Ty, staying retired doesn’t seem to be in the cards, and an avalanche of bad luck draws him right back to an agency he despises and the career that nearly cost him his sanity.

This time, Ty has no way out and will have to face his own demons just to survive.

Add it to your Goodreads shelf !

You don’t even have to be a book blogger!

Nope, so long as you are willing to leave an honest review between the dates January 27th – February 10th 2014, you are eligible to enter.

Then just fill out the form and keep your fingers crossed.

You have until midnight of January 26th to enter.

Alex lives in the tourist infested hills of east Tennessee with his amazing wife/muse and three superb children. He would tell you more about how awesome they are, but you probably wouldn’t believe him. When he’s not hanging out with them he’s making pizzas. When he’s not doing that he’s working at a bookstore and occasionally he jots a few words down. He’s a big fan of good music, good storytelling, and mixed martial arts.

He once wrote a short story about pirates to his wife via text message that blossomed into a full length novel and never stopped after that.

One thought on “Beasts of Burdin ARC Giveaway!”