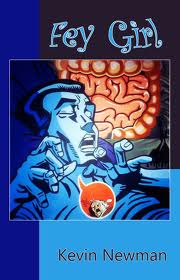 I am an over-analyzer.  It is a flaw, (of course) something imbedded so deep down into my psyche that correcting or “fixing it” (if you will) is all but hopeless. In short… I have a hard time accepting mundane facts.  I need details.  I thrive on them.  I stay awake pining for them.  I am, (God bless my completely ridiculous soul) one messed up puppy.

It was not (however) until I read “Fey Girl” by Kevin Newman that I realized I’m not the only one like this.  See…”Fey Girl” is unlike anything I have ever read before.  It’s detailed without really conveying a point.  It swallows itself down a drain of it’s own making, and it feels fractured.  Not in a horrible plot way mind you, (that is a whole other bag of “WTF”) but in a totally schizophrenic way.  In a “I just read 189 pages and I’m not sure what’s real and what’s fake” way. In a “I can’t believe I need a dictionary to read this book!” way. In other words…I have a feeling Kevin Newman’s brain is equal to mine.  Wired wrong.

“Jude Pender has troubles managing his emotions. Case in point: Cecile. He thinks he can bury his thoughts and that the rest of his neurons will naturally grow around them, leaving an obelisk that he can visit as if in a dream. And since he doesn’t know when to give up, the result will be an explosive release after a series of betrayals.”

Now, there is something very important to understand about this book that will NEVER in a million years, (ok, maybe not “never” he did use the word “obelisk” for Christ sake) be conveyed by the synopsis.  This novel is “WORDY.”

Surprising isn’t it… that I can throw something so finite out about a book that doesn’t even reach the 200 page mark, but I assure you…if you do decided to purchase this literary version of a mental breakdown, it is the first thing you will notice.

“It had become apparent to me, that with Terry so proliferate in talking about her, Cecile had rarely needed to do so, and I wondered if she had ever been so inclined.  What I noticed she did like doing was making others feel nigh-omnipotent.  This was her power, and it was never held over others, although we allowed ourselves to drown in it.  She would display this ability often enough that it was washed away by universal minutia, and therefore, would go largely unnoticed on a conscious level.  I myself would be captured in this spell, and even though it would be years before I understood what it was, this was the reason I fell in love with her, and why I never had a chance to escape that fate.  She was an event horizon, beyond which was every point in time and you could be anything you wanted to be.”

Very Troy Dyer ala “Reality Bites” right?  While I can appreciate the complexity of the thought… the constant need to fling it around like fairy dust seemed a little much.  In fact… there were points in the book where Jude’s need to justify his actions by word slinging became downright down-trodden dragging the entire book into a black hole, (aka… I REALLY wanted to skim.)

Another thing that had me raising my eyebrow…the split plot.  While I loved one aspect of the story, (Jude and Cecile) the other side…the “Fey” side, came across as abstract and completely useless.  As a matter of fact, I felt like I was reading 2 different books.  And, just so we are clear on which was the more dominant… I still don’t know what they hell happened in “Fey” (there was a battle…someone died and then……….)

Now, was it all bad? No… I actually like “Reality Bites” so it’s uncanny likeness to it had me chuckling and wondering what lame excuses Jude would come up with next. And, the emotions that Jude felt in regards to Cecile seemed genuine and real, even if they were a tad naive.  It’s just too bad the rest of the story wasn’t as focused as their relationship.

So what do I think overall? Well…even though it spouted probably one of the best opening lines I have ever read:

“One day watching blue jays, sparrow, and a bunch of other birds I don’t know the names of, I thought: “Where the f**k did they all come from?”

it can be a pretty daunting book, if for no other reason than language.  My advice, proceed with caution.  This book is NOT for everyone, but it might just be for those of you that like to second guess EVERYTHING.

This one is a toss up people… take it or leave it, just be mindful that it is horribly excessive and a little abstract.

Happy Reading my fellow Kindle-ites and remember: “The energy applied in the beginning was a physical effort and a monetary infusion that then supplied a cocktail of joules to the birds”  (yeah… I shook my head too. It’s ok.)

One thought on “Brain Scrambler”